The Strange Miracle of Nebraska’s “Lucky 15”

Is there such a thing as coincidences? Can all of the strange little pieces of synchronicity and often bizarre linking of the events around us all be attributed to sheer chance? The same thing can be asked about miracles, those incredible occurrences that seem to be some sign from forces that lurk beyond the veil of what we know. Is it just absurd luck or something more? Sometimes these two phenomena merge in remarkable incidents that seem unlikely at best, and impossible at worst, but which seem to be almost preordained and orchestrated by strange powers beyond the limits of what we understand, or beyond what we were even meant to.

At 7:25 PM on March 1, 1950 the otherwise quiet evening in the town of Beatrice, Nebraska, was shaken by the roar of an explosion, so powerful and fierce that it knocked out power all over town, shattered windows, and caused a local radio station to shut down. The epicenter of this spectacular blast was soon found to be the Beatrice’s West Side Baptist Church, which had been completely destroyed and gutted by fire, the roof caved in and walls blown out to reduce it to a charred heap. Among the shocked onlookers staring in disbelief at the carnage was Reverend Walter Klempel, who had just that very evening turned on the church furnace to get the place warmed up for choir practice, which started at 7:20 PM sharp. He was sure that they all must have died in that blast, but the firemen found not a single body, as no one had been in the church at all through a bizarre series of events that defies understanding and is still seen as a true modern miracle. The cause of the explosion was rather mysterious, with the fire department coming to the conclusion that it had most likely been caused by a natural gas leak, but even more mysterious than the cause was the fact that no one had been there. None of the 15 members of the choir had ever really been late before, with most of them always arriving early by 7:15, and even stranger than this was that every single one of them had been late on this particular evening due to a string of unlikely events and mishaps that seem almost ridiculous and beyond mere coincidence. The reverend himself had been late for the practice because as he had been leaving the house with his wife and daughter to attend it had turned out that his daughter’s dress was soiled from spilling food on it and so his wife had ironed another. A fortunate stroke of luck, as it spared him a violent death, but it gets even weirder than this, with delays caused in each member for all manner of reasons.

High school student Ladona Vandergrift had never been late a day for choir practice, but on that evening she had been stumped by a problem on her geometry homework and was so absorbed in it that she lost track of time and wanted to finish it before she left. Her friend and fellow choir member Rowena Estes and her sister were having car trouble that day, unable to get the vehicle to start no matter what they did, and oddly they called Ladona for a ride, which she could not do in a timely fashion because of that homework, making all three of them late and therefore saving their lives. Their high school classmates and neighbors Lucille Jones and Dorothy Wood usually went to practice together and were always early, yet on this day Lucille found herself so fascinated by a program she was listening to on the radio that she missed her usual time to leave the house and so made Dorothy late as well. Another student and pianist for the choir, Marilyn Paul, had actually wanted to arrive very early, but for reasons she could not explain she had taken an unusually deep nap after dinner and overslept.

It was not only students who were late for all of these odd reasons. Marilyn Paul’s mother was the choir director and she was late too, simply because she was trying to wake up her daughter, who could strangely not be easily roused from her slumber. Bizarrely, another woman named Joyce Black, who happened to be the choir stenographer, was also late because she was feeling uncharacteristically sleepy and lazy that evening, for some reason deciding to wait until the last minute to get up and brave the chill outside. She lived right across the street from the church, so close that her windows were blown out by the blast and objects were thrown about. Black would later say of her odd lateness:

I was just plain lazy. So I kept putting off going out the door. At last, I couldn’t put it off any longer and when I opened up the door, our church disintegrated. 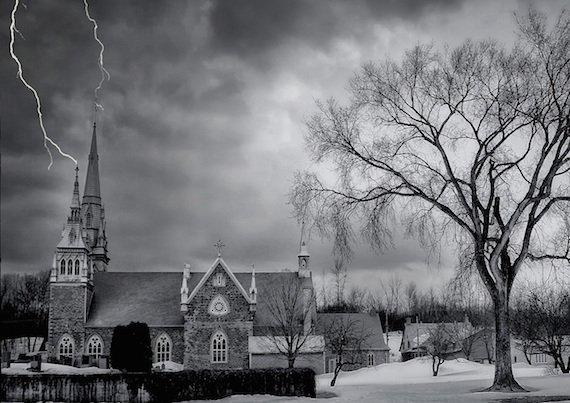 Making it all odder still is that Black had just been about to leave the house when the explosion occurred. Another woman named Leonard Schuster typically went to the practice with her young daughter, but both of them were late because Schuster had suddenly been called upon to help work on a meeting for a missionary. Lathe operator Herbert Kipf was late because he had been working on an important letter and decided to stop along the way to send it off, and machinist Harvey Ahl had planned to go to the practice with his two sons but lost track of time chatting with them, leaving the house late and unknowingly saving the lives of all three of them in the process.

The devastated church has since been rebuilt, with no sign of the devastation that once tore through here, but the miraculous events that unfolded around the “Lucky 15” have not been forgotten, and the case has appeared on TV shows such as Unsolved Mysteries and Beyond Belief. How is it that 15 different people, all known for their punctuality, all happened to be late on this one night, many of them for odd reasons and in some cases just barely managing to miss that 5- minute window between 7:20 and what would have been their grisly deaths at 7:25? What are the odds that not a single one of them was in that building when it was destroyed? Was this just a random, freak coincidence or were there other forces at work? Whether an actual miracle or an unlikely one-in-a-million stroke of dumb luck, the weird case of the Lucky 15 will probably inspire wonder and awe for some time to come, and make one really think about what coincidences and miracles really are.