The Weird Story of the Monstrous Basilisk

Anomalies researcher and writer Mike Dash says: “Few creatures have struck more terror into more hearts for longer than the basilisk, a monster feared for centuries throughout Europe and North Africa. Like many ancient marvels, it was a bizarre hybrid: a crested snake that hatched from an egg laid by a rooster and incubated by a toad.” Tales of the Basilisk really came to the fore in 79AD, in the pages of Pliny the Elder’s Natural History. It states of the beast that: “It is produced in the province of Cyrene, being not more than twelve fingers in length. It has a white spot on the head, strongly resembling a sort of a diadem. When it hisses, all the other serpents fly from it: and it does not advance its body, like the others, by a succession of folds, but moves along upright and erect upon the middle. It destroys all shrubs, not only by its contact, but those even that it has breathed upon; it burns up all the grass, too, and breaks the stones, so tremendous is its noxious influence. 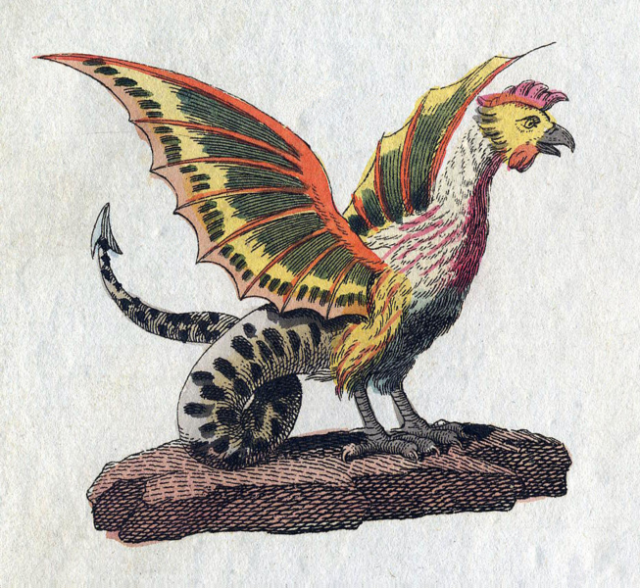 "It was formerly a general belief that if a man on horseback killed one of these animals with a spear, the poison would run up the weapon and kill, not only the rider, but the horse, as well. To this dreadful monster the effluvium of the weasel is fatal, a thing that has been tried with success, for kings have often desired to see its body when killed; so true is it that it has pleased Nature that there should be nothing without its antidote. The animal is thrown into the hole of the basilisk, which is easily known from the soil around it being infected. The weasel destroys the basilisk by its odor, but dies itself in this struggle of nature against its own self.”

None other than Leonardo da Vinci told a very similar story. He said that the monster “…is found in the province of Cyrenaica and is not more than 12 fingers long. It has on its head a white spot after the fashion of a diadem. It scares all serpents with its whistling. It resembles a snake, but does not move by wriggling but from the center forwards to the right. It is said that one of these, being killed with a spear by one who was on horse-back, and its venom flowing on the spear, not only the man but the horse also died. It spoils the wheat and not only that which it touches, but where it breathes the grass dries and the stones are split.”

Without doubt the most notable account of the Basilisk comes from the Polish city of Warsaw and dates from 1587. Midori Snyder says of this case that it revolved around “a terrifying encounter and eventual capture of a Basilisk hiding in the cellar of a house who is suspected of bringing the plague.” So the old story went:

“The 5-year-old daughter of a knifesmith named Machaeropaeus had disappeared in a mysterious way, together with another little girl. The wife of Machaeropaeus went looking for them, along with the nursemaid. When the nursemaid looked into the underground cellar of a house that had fallen into ruins 30 years earlier, she observed the children lying motionless down there, without responding to the shouting of the two women. When the maid was too hoarse to shout anymore, she courageously went down the stairs to find out what had happened to the children. Before the eyes of her mistress, she sank to the floor beside them, and did not move. The wife of Machaeropaeus wisely did not follow her into the cellar, but ran back to spread the word about this strange and mysterious business. The rumor spread like wildfire throughout Warsaw. Many people thought the air felt unusually thick to breathe and suspected that a basilisk was hiding in the cellar.”