Two Bigfoot Sightings in One Week in Northern Georgia

A recent survey of the top places in the U.S. to see a Bigfoot, Sasquatch or some other version of America’s favorite tall, hairy cryptid stopped at #8 Texas and didn’t mention Georgia. A recent map showing the top cryptid in every U.S. state listed the Altamaha-ha (a strange green cryptid, described as 20-30 feet long, with a sturgeon like body and a bony ridge on its top) as Georgia’s top mythical creature. Both of these catalogs may have to be updated with new reports of two Bigfoot sightings in northern Georgia in just one week in May. Is Sasquatch looking for a tryout with the Atlanta Falcons, who are currently conducting Offseason Training Activities (OTAs)?

“Bigfoot sighting between Ellijay and Blue Ridge Monday night 5/20 at 8:30pm. It was still light out and driver braked when he saw what he described as a very dark, 7-8’ tall, hairy, two legged creature with a pointed head, walk along shoulder and into the woods. He said the arms were very long and it walked with the arms extended from its sides.”

They may not be getting the national media attention that UFO sightings are receiving (see the latest report in The New York Times) but The Charlotte Observer, WAFB and other local media responded quickly to posts on Facebook about the sighting, especially on the Expedition: Bigfoot page run by Dave Bakara, owner of the Expedition: Bigfoot Museum in Blue Ridge. Bakara knows the area – that stretch of road is State Highway 515 in Cherry Log, a tiny (population around 120) unincorporated community in Gilmer County in far northeast Georgia near Blue Ridge. Witness Edward Lee recalled the experience for The Charlotte Observer:

“My own wife didn’t believe me, I guess. It wasn’t no bear. It was walking straight up, like a human, with long arms swinging back and forth like a monkey. I saw it on the side of the road, it took five steps and was gone in the woods. I mean, I’m 51 and I’ve never seen one before. “I wasn’t getting out of the truck and I wasn’t going to go into the woods looking for it.”

After the sighting was publicized, another encounter a week later on Memorial Day (May 27) in a nearby area was reported to Expedition: Bigfoot.

“A man called Monday after he saw the post about the sighting in Cherry Log. He called to say he saw a black/gray one in Rabun County near Clayton on his way to work on Monday morning. It was walking thru a field early am and knelt down at a branch where there are trout present. At this point, he was at his closest to the creature, 50 feet. When the witness moved (he’d exited his truck to get a better view), the creature saw him and walked back to the woods.”

Clayton is about 75 miles east of Cherry Log, making it closer to North Carolina which has also had its share of Bigfoot sightings (and UFO sightings) recently. All of these reports are near the Blue Ridge Mountains and their many heavily-wooded parks. Is something driving Sasquatch out into the open? Development? Clueless hikers who spend more time looking at their cell phones than appreciating nature? 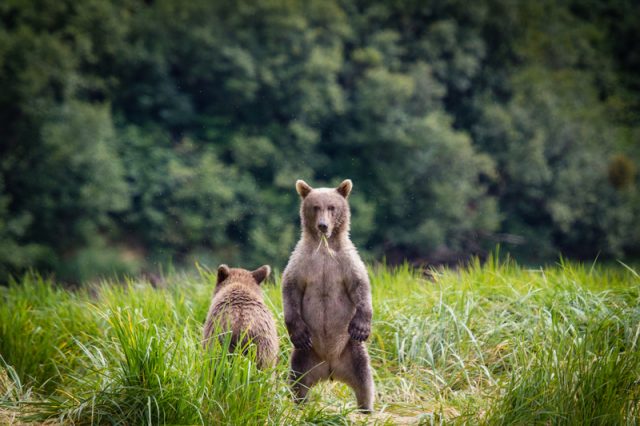 As usual, there are no photos of either sighting, although Edward Lee was shown a drawing of an alleged Bigfoot and said that’s what he saw. As with many other sightings in many other parts of the country, these areas also have their share of hairy creatures known as bears. Fortunately, these sightings are close to Expedition: Bigfoot, the “World's Largest Bigfoot Museum” with “4500 sq ft of Self Guided exhibits.” Let’s hope Dave Bakala keeps us informed and tourists excited by their visits to the museum keep going out and looking for more Bigfoot.

And keep their phones ready for photos!