A Mysterious Island Paradise of Cursed and Haunted Ruins

The ancients left behind many scattered mysteries on this ball of rock we call home. Every corner of our planet seems to play host to some conundrum from another time, some anomaly that these people left for us to try and figure out on our own, trying to peer through the mists of time to no avail. These are places shrouded with mystery and often permeated with myth and legends, wellsprings of the haunted past of a long forgotten age. One of these places lies out in the Pacific Ocean far from civilization as most of us may know it. Here upon the vast expanse of the sea lies a place held in reverence by the locals, which has remained unexplained and is a breeding ground for strange theories, archeological mysteries, and odd legends.

Out among the many islands of the Federated States of Micronesia, in the western Pacific Ocean, is a rather curious place imbued with its own colorful past and myriad mysteries spread out under the tropical sun and ringed by white sand beaches. Here, connected to the eastern coast of the Micronesian island of Pohnpei and lying within a lagoon is an impressive array of 92 artificial islets intersected by canals and built up with walls, columns, and other megalithic structures composed of coral and volcanic basalt, and the ruins of an ancient city mired in mystery. Indeed, this place, called Nan Madol, has managed to defy most attempts to explain its structures, and the so-called “eighth wonder of the world,” or the "Venice of the Pacific" has managed to remain a perplexing mystery to this day.

Among the many mysteries of these islets is that no one is really sure why they are here or how their enigmatic structures were built, and very little is even really known about the history of this place. It is known that Nan Madol once served as the capital of the local Saudeleur Dynasty all the way until 1628 before mysteriously abandoning it, that different islets seem to have served different purposes, and that this place was inhabited by high ranking priests and chiefs, but considering the total lack of any written record that is really all we know for sure. As for the megalithic architecture, this has created a profound conundrum among archeologists, as no one can figure out how just they did it.

It is thought that Nan Madol’s megalithic architecture was constructed beginning in around 1180–1200 AD, and the proportions of these walls and structures is vast is scale. Many of the gigantic basalt logs used to build much of it weigh anywhere from 5 to 50 tons each, and there are hundreds of them meticulously formed into immense walls measuring up to 50 feet high and 17 feet thick. There is no archeological evidence of any sort of technology here that could account for such massive blocks being moved here from distant sources over the ocean and hoisted into place, and no evidence anywhere else in the region of anything even approaching this sort of marvel of engineering. Making it all the more befuddling still is that rather than just build these structures on land, the people who created them chose instead to make them upon these elaborate artificial islets at great extra expense and effort. Explorer Ivan Mackerle has said of this oddity:

The peculiar location of the city raises another baffling question. Why was it raised in the ocean waters and not on land? Each structure had to be built on a specially constructed artificial rectangle in the water, edged by long basalt boulders and filled with coral granules. 92 such artificial islets cover the area of 2.5 square kilometers. Why did the early builders come up with this insane idea, demanding the grueling labor of building artificial sea islands when there were so many natural coral reef islands here, or when they could simply clear the shore of a few palm trees? 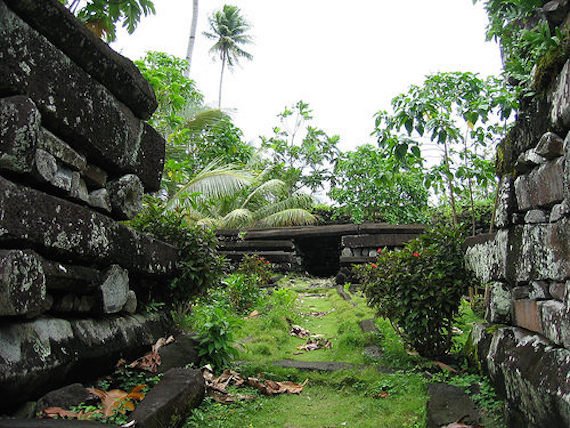 Considering the utter lack of any written records on their construction and the void of anything even resembling it anywhere else in the history of Micronesia, all of this has left questions and speculation surrounding their construction, and how they were made depends largely on who you ask. The islanders themselves have a rich lore concerning the ruins of Nan Madol. According to them the structures have been there since before their ancestors even arrived, and they believe the massive stones were magically levitated there by two powerful ancient sorcerers called Olisihpa and Olosohpa, who would go on to create the city and prospering civilization of the Saudeleur kings. The locals claim that beneath the city lie vast networks of tunnels and tombs, and that this was once the land of actual giants and the stomping grounds of various spirits.

Officially, scientists have been unable to really explain how the rocks that make up these structures were transported or put into place, to the point that there isn’t really any theory on how it was all done. The closest they have come is that the blocks were somehow transported upon enormous bamboo or wooden rafts, yet not only is there no archeological evidence of such grand rafts, but modern experiments to replicate this by moving stone columns with rafts have failed with boulders of just 1 or 2 tons, let alone 25 or 50. Making it harder to study is that Nan Madol is largely considered a deeply sacred place by the locals, which they believe should remain undisturbed, and as such archeological digs have long been actively discouraged here, providing further obstacles to learning any more about it.

Indeed, the locals say the place is prowled by guardian spirits who will attack those who dare enter, and that the ancient kings placed potent mystical wards against outsiders on this place. One of the only real extensive archeological investigations into the mysterious islets was made in 1874 by Polish anthropologist Jan Kubary, after which his ship promptly sank to take its valuable artifacts with it. Another story concerning the supposed curse of Nan Madol is the tale of English archeologist F. W. Christian, who supposedly entered a secret tomb within the complex and found the skeletons of actual giants measuring 10 or more feet in height. We will never know if this claim was true or not, because a massive storm is said to have lashed the area at the time, causing him to abandon the investigation, after which he would die of a mysterious illness the following day to take the secret of this mysterious tomb to his grave with him. In later years in the 1900s a German governor on the main island of Pohnpei by the name of Victor Berg supposedly also found a tomb of giants and died not long after from mysterious causes. 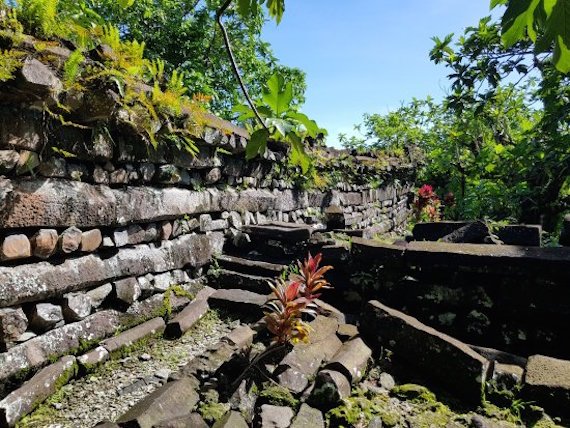 Whether there is a curse or not, there has been very little scientific investigation into these ruins at all. However these ancient people did it, we are unable to do it even now with our modern technology, the ruins remain almost a complete enigma, and this general shoulder shrugging within the scientific community with regards to Nan Madol has left the door open for all sorts of more fringe theories. One is that the structures were really built by the giants of island lore, and there have been stories to support this. Besides the tale of Kubary finding a tomb of giants and that of the German governor, there were supposedly enormous coffins made of platinum removed by the Japanese just before World War II, but these disappeared into the mists of history. There have also been scattered reports of coming across human bones far larger than normal, but these remain unsubstantiated.

Other theories are that Nan Madol is actually the remnants of some lost civilization or that it is the actual location of such ancient lost lands as Atlantis, Lemuria, or Mu. There is of course the idea that aliens made it, as well as the ideas that it was built by Greek sailors in 300 BC, and even that it is some sort of ancient weather manipulation device that works by channeling seismic activity up through the structures to spew into the atmosphere and create storms. For now, it all remains unknown. We still do not know who built this strange place, why, or how, and it remains a place where legends, myth, and historical oddities merge into an almost mystical realm of the unexplained.