In December 2018, a strange radar anomaly appeared over the Midwestern United States. Civilian weather radar showed a massive, stationary blob that hovered near Evansville, Indiana for over ten hours in a relatively tight formation. Months later, similar anomalies appeared on radar systems in Sydney, Australia and near Cannon Air Force Base in New Mexico.

Many aviation insiders quickly floated the theory that these anomalies were caused by a new type of chaff, a type of aircraft countermeasure which involves launching clouds of metallic fibers into the air to confuse enemy radar systems. If that’s the case as has been assumed, why test it over civilian areas, though?

Now, three months after the New Mexico incident, another strange radar anomaly has appeared in the United States, this time over Southern California. Meteorologists throughout the area spotted a dense blob on weather radar covering some 80 square miles (130 sq km). As in previous cases, the anomalous formation appeared on a clear day without any cloud cover. "It was very strange because it was a relatively clear day and we weren't really expecting any rain or thunderstorms," National Weather Service meteorologist Casey Oswant told NPR. "But on our radar, we were seeing something that indicated there was something out there."

Residents of America’s western deserts are no stranger to aerial mysteries and curiosities given the region’s numerous military aerospace and weapons development facilities, but the explanation offered for this most recent radar mystery is odd. According to the National Weather Service in San Diego, this radar anomaly was caused by a massive swarm of ladybugs flying miles above the ground.

This particular phenomenon is known as a “bloom” and occurs whenever large populations of ladybugs all migrate at once to seek food or warm weather in winter. Still, experts say the timing is odd; these blooms typically appear earlier in the year as winter gives way to spring. "It's not exactly clear why we're seeing this big swarm now that we haven't before," says Cornell University entomologist John Losey. "Is that just sort of a random effect of what happened in the weather and the prey populations? Is it having something to do with climate change that's sort of condensing when they all are going to fly?” 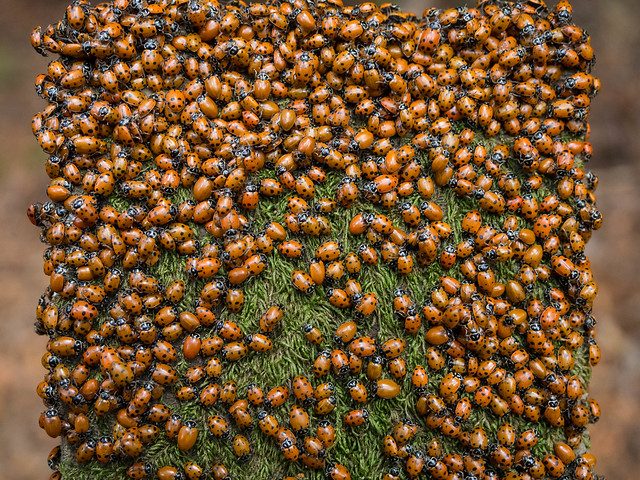 Not all ecologist and entomologists are buying the ladybug bloom story. James Cornett, senior scientist with the aptly-named James W. Cornett Ecological Consultants, says a ladybug swarm that size would have darkened the skies and created a panic. "There would have been unbelievable numbers of telephone calls to the police," Cornett said. "It merits some investigation." The San Bernardino County Fire Department received no reports of massive ladybug swarms.

Apparently, the ladybug theory was put forward by a single weather service spotter who reported a high number of ladybugs in the area at the time of the swarm. Could these ladybugs be a convenient scapegoat? This is only the latest in several strikingly similar radar anomalies, yet insects were not cited in any of the other incidents.

Judging from radar footage posted to Twitter by the National Weather Service, this alleged ladybug swarm was spotted moving south from what suspiciously seems to be either Edwards Air Force Base or the Fort Irwin National Training Center, one of the U.S. Army’s premier training centers. The Fort Irwin site houses mock cities and villages designed to resemble urban areas around the world and frequently uses both live and simulated unmanned aerial vehicles to prepare units to face these threats in the field. Edwards AFB, meanwhile, is home to all manner of Air Force testing and research centers which develop black budget aerospace projects and the most bleeding edge aircraft technologies. Much of the airspace surrounding the area where the “ladybug swarm” was spotted is restricted to military use.

The location of this anomalous radar blob seems pretty coincidental, and the fact that nobody saw or photographed an 80-mile wide swarm of insects flying just a few thousand feet off the ground is pretty weird. Could this ladybug bloom have actually been a swarm of tiny drones, a test of some radar-spoofing electronic warfare technology, or something far spookier? It wouldn’t mark the first time the military has tested a swarm of micro-drones over California. Which seems more likely, particularly given that some ecologists doubt the ladybug story?

A Mysterious Island Paradise of Cursed and Haunted Ruins