“An enforcement arm of the UFOnauts”

A couple of days ago, I wrote an article here titled "She believed he was an extra-terrestrial being." It was focused on a case from the files of a long-time UFO researcher named Wayne LaPorte. The article referred to above was written as a result of Wayne very generously sharing with me some of his data. All of which brings me to another fascinating case-file that Wayne gave me. It was on October 29, 2016 that I first read it. In Wayne's very own words: "This account was first related to me by two friends of mine – Don and Sarah Morris [address deleted]. Both have read little on UFOs, and have read nothing on Men in Black (MIBs). On May 27, 1977, Don, Sarah and myself had supper out. I was discussing hostility sometimes expressed by UFOs. I mentioned that there are on the record cases of Men in Black or MIBs. They asked me what that meant. I said, 'The MIBs may be an enforcement arm of the UFOnauts. They often dress in black, and are very human-like.’ Sarah said: 'Really? We had a strange experience with some men dressed in black turtleneck sweaters at a Kent State Memorial Service in 1972. We photographed them, because of their dress. Our film was ruined. There’s not a UFO involved here. However, it was very odd that our film was ruined.'"

Wayne continued: "It was the first part of July, 1972. Don and Sarah attended a Kent State Memorial Service at Freedom Park in Charlotte, N.C. Both are amateur photographers. They had a Honeywell Pentax 35mm camera. The service was a non-violent, anti-war demonstration. There was a stage set up. Various people were giving speeches. There were some singers and group singing also. It was sunny and very hot. The FBI were there and very obvious. They were going through the crowd and photographing various people mainly for harassment. Don wasn’t a protestor (active), and did not have a photographic file on the FBI. However, he was upset that the FBI were bothering the people. So, he decided to harass the FBI by taking photos of the FBI photographers."

That's when things got a bit strange, as Wayne notes: "Don and Sarah first noticed the MIB when they first drove into Freedom Park (a recreational park a few miles from downtown Charlotte). They were in the auto in front of Sarah. One of the MIBs turned and stared intently at her. She noticed the turtleneck shirt and that they were clean shaven. They had short hair. She said, ‘They must be part of the local FBI showing up.’ She thought they were FBI, because of the short haircut. The two MIBs and the FBI men were the only ones with short hair at the Memorial Service. Don and Sarah later noticed the two MIBs. Don had been walking around photographing the FBI agents. He returned to Sarah who was with the audience. A simple stage had been erected. The audience was seated in front of it and spread out like a fan. Don and Sarah were near the back of the audience. There were no chairs. Everyone was seated on the grass." 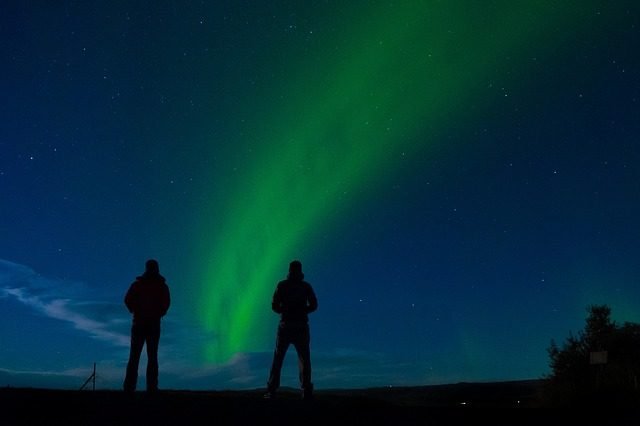 There was more to come: "The two MIBs stood behind the audience and about 50 feet from the audience. They wore black turtleneck shirts or sweaters (both can’t recall whether they had on shirts or sweaters). Their clothes were both identical – also very clean and neat. They never talked (even to each other). They never went to eat or to the restroom. They stayed in the same spot all day. The temperature was about 27 degrees centigrade. The MIBs weren’t sweating. They just kept looking around and staring at everyone."

The strangeness got even weirder: "Don and Sarah can’t recall any facial features. However, they never thought of them being non-human. They thought the MIB were 'FBI supervisors.' They took a few photos of them from the crowd. Then, Don went around and came up behind them. He got to five feet (1.5 meters) behind them. He focused the camera. He hoped they would sense he was behind them and turn around. He wanted to capture the surprise on their faces when they turned around. However, he waited behind them for 5 minutes. They never turned around. Then, like he was 'commanded,' Don returned to Sarah in the audience. He doesn’t recall any verbal or mental command. However, all of a sudden, he lost interest in trying to photograph the MIBs."

If that was not strange enough, there's the following from Wayne: "The next week, Don and Sarah developed the black-n-white film at their home photolab. The film was completely black from front to back. It was as if struck by some form of intense electromagnetic radiation. Their thoughts were that the FBI had a secret radiation weapon that the FBI used on them to destroy their film. However, Don doesn’t recall seeing the FBI or MIBs point any weapon at them. Also, Don doesn’t recall experiencing any radiation sickness. There is the possibility that Don had purchased a roll of film that had been accidentally exposed to radiation while being shipped to the retail store. To me, that is possible, but very unlikely. If the film was good  then 1. The FBI have a secret radiation weapon; 2. The MIBs used some type of weapon secretly on Don’s camera; 3. The MIBs psychically were able to destroy the film. 4. The MIBs themselves were an energy entity or were radiating electromagnetic radiation. 5. The MIBs had a protective energy field around them."

Wayne dug further into what was rapidly escalating into a very strange situation: "Harry Joyner owns a photolab (Joyner and Associates) in Charlotte. He has offered to give us free photographic assistance on any case. He listened to the taped interview. The description of the ruined film indicates the following: total exposure to light or intense heat or chemical fumes or exposure to gamma, alpha or beta radiation. The witnesses said they made no darkroom mistakes while developing the film. Harry also does some photographic work for the FBI. He told (at my request) on of the FBI agents of the MIB incident. He asked the agent if the two MIBs could have been FBI agents. The agent replied “No.” The agent wasn’t involved in the 1972 Freedom Park affair. However, he said that the FBI would never dress like that, and act in such a manner (not moving around, not talking, etc.)."

Wayne concluded: "Although no UFO is involved here, the two Men in Black appear to be MIBs. Nolie Bell of the Tar Heel UFO Study Group, Winston, Salem, N.C. knows of a similar case. Two MIBs were spotted at a Kent State Memorial service. That report said the MIBs had oriental features. Also, John Keel related to me that he knows of one case in which possible MIBs were photographed. A photograph was taken of a group of (outdoors) attending a meeting of a radical nature. There were two men in different parts of the crowd. They had on black suits with turtleneck shirts. They both looked like twins. They had lean, angular faces. The hair was cropped short. This was a group photo. It was not a close-up. Incidentally, this was in England. I feel this case is significant as it involves a close-up attempt to photograph a UFO."

When I read Wayne's account – of both the MIB and the FBI being present at the scene in question – it instantly made me think of something John Keel once wrote on the matter of two different kinds of Men in Black. Keel put down on paper, on March 15, 1968 the following: “I have very substantial reasons for believing that the current explosion of MIB activity is directly related to a forthcoming national crisis. The crisis has been developing over a long period of time. The numerous hoaxes, deceptions, and seeming meaningless incidents inherent in the UFO phenomenon have actually served to cover up the real situation.” Now, we get to the crux of the matter. Keel added: “It appears as if two groups of MIB are involved [italics mine]. One group is extremely dangerous. They have committed murder and arson on a broad scale, operating under the carefully constructed umbrella of ridicule and nonsense surrounding the UFO phenomenon. The second group is trying to focus our attention on the first group by imitating MIB activity through harmless interviews, presentation of obviously false credentials, etc. We must understand and appreciate the efforts of this second group, and learn to discriminate between the two.”

I thought, Keel was always ahead of his time. In whatever afterlife domain he now dwells, he probably still is.