If you’re looking for a place to vacation, you probably go for a location with better weather than you have back home. On the other hand, people looking for a place to move to generally choose a spot that’s just like home. If that’s the way humans think, perhaps extraterrestrials do the same. If the exoplanets currently being discovered are colder than Earth, then it would make sense that travelers from these worlds would settle someplace cold, like Antarctica or Siberia. That may explain why 5,000-year-old art found on never-touched stone-walled graves in Siberia depicts beings that look nothing like humans and were painted using techniques and colors uncommon for that time. Aliens making the place look like home? 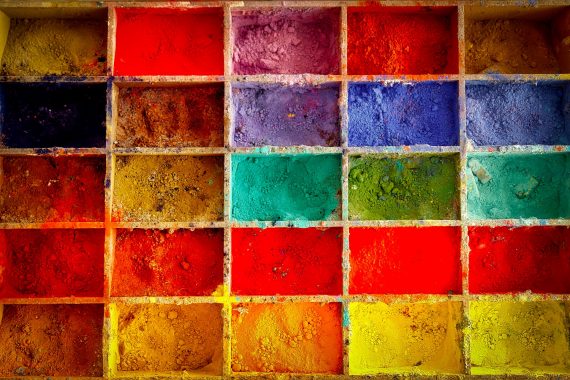 "The results of the analysis of the composition of paints used in the funeral rite of Karakol people testify to the ability of the ancient inhabitants of Altai to distinguish pigments by colour and properties."

That ability is not what Alexander Pakhunov of the Institute of Archeology at the Russian Academy of Sciences was expecting when he was given the opportunity to chemically test the paints used by early and middle Bronze Age artists to paint eleven strange-looking humanoid beings on stone slabs which formed the walls of ancient graves in the Karakol village of the Altai Republic in West Siberia. (View the paintings here.)  They were discovered in 1985 and appear to have been untouched since the Bronze Age. The remains looked normal – no elongated skulls – and were painted with what the researchers say was the first usage of polychrome colors (white, red and black) ever found in Siberia. However, what intrigued the researchers was that fact that the paints weren’t made with simple ingredients.

"Some structures are not typical for natural samples, but are the product of heat treatment. Simply put, the primitive artist heated the mineral to a certain temperature in order to get the colour he needed.”

In an interview with The Siberian Times, Roman Senin, head of the synchrotron research department at Kurchatov Institute, explained that these ancient artists used scientific techniques that were unheard of for those times to create the vivid colors in these paintings. How did they learn these methods?

“We find depictions of elks, mountain goats, but also humanoid figurines that were drawn running around with round horns and halos on their heads. The eleven human-like figures make a single composition, finished with a continuous red line drawn over the images.”

If this was a depiction of a funeral ritual, who – or what – was presiding over it? The remains are human, but the beings in the pictures have long arms and those strange heads with stranger headgear. Were the humanoids ETs giving their shivering Siberian friends new techniques from their home planet in return for welcoming them with open arms and warm yak blankets? For the answer to this and more burning questions, we have to wait for more leaks (yes, archeology has joined politics in leaking secret documents) of the study by Senin, Pakhunov and others scheduled to be presented at the 43rd International Symposium on Archeometry in May 2020 in Lisbon.

The Mysterious Little People of the Cherokee