“Our main vision is to take a worldwide celebrated holiday and make people aware of the UFO phenomenon during this day. We see a future in which UFOs aren’t speculations anymore, but part of daily life.”

WorldUFODay.com seems to be the home of all things World UFO Day. The idea to hold it on July 2nd was inspired by the Roswell Incident which occurred on July 2, 1947, although in its early days (the first celebration was coincidentally in 2001) the holiday was also celebrated on June 24, the anniversary of day also in 1947 that pilot Kenneth Arnold claimed to have seen nine UFOs flying in a formation near Mount Rainier, Washington -- making it the first big UFO event in the US. WorldUFODay.com promotes the July 2nd date with an event map, poster and tips on how to celebrate, although it doesn’t appear to have been updated lately.

For a more timely list of places to celebrate World UFO Day where you’ll have the highest probability of seeing one or more, SatelliteInternet.com has compiled a nice list of the number of UFO sightings in the U.S. per state (using data from the National UFO Reporting Center’s online database) and then used population data (from the last US Census – see how important it is to count everyone?) to rank them in order of most sightings per 100,000 people. 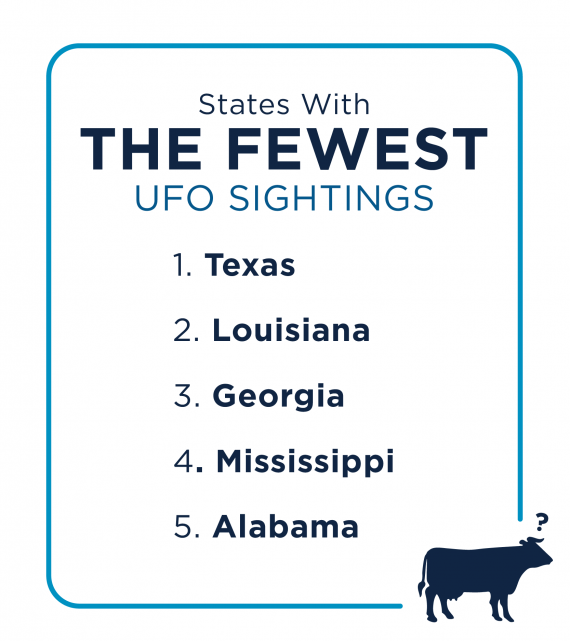 Based on this compilation, the state where you don’t want to be on World UFO Day is … Texas! The Lone Star State has 4969 sightings but its area-to-population ratio puts it at the bottom. Neighboring Louisiana is 49th (and that probably includes a few questionable Mardi Gras sightings), followed by Georgia, Mississippi and Alabama. Why don’t UFOs like the Deep South? That’s a question for ufologists, sociologists, space scientists and tourism bureaus. Let’s look at where you should be on July 2nd to see a UFO. 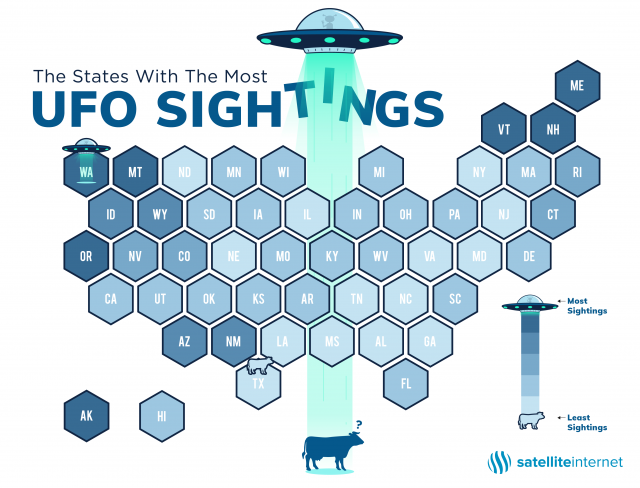 The number one UFO hot state in the US is … not New Mexico! Sorry Roswell fans. In fact, they may want to consider changing the date to June 24 because the US state with the best chance of seeing a UFO is Washington – home of the Kenneth Arnold sighting. Number two is the aptly-named Big Sky Country of Montana, followed by Vermont (Vermont?), Alaska and Maine. The listing doesn’t give any details on sightings – it’s just a summary but a good place for starting discussions and arguments. What about this UFO aversion to southern states? Or why is Vermont so popular? Do extraterrestrials like maple syrup on their food capsules? Of course, the most interesting question about Washington might be if there’s a connection to the state’s Bigfoot sightings – where a different study found Washington also at Number 1.

Wherever you plan to celebrate World UFO Day, party responsibly and take some good pictures and videos!

The Very Weird World of Nessie: UFOs, a Magician and Shapeshifters