While real Nazis search for other things (perhaps they know something others don’t?), treasure hunters have spend decades looking for the precious metals, jewels and rare art looted by the Nazis as they rampaged across Europe in World War II. One such collection was the Amber Room or Amber Chamber – a royal chamber decorated with panels of over six tons of real amber that was created by German craftsmen during the 18th century and presented as a gift to Peter the Great from Prussia's King Frederick William I in 1716. It was placed in the Catherine Palace south of St. Petersburg until World War II when German troops found the Amber Room, dismantled it and took it to the Royal Koenigsberg Castle, where it stayed until 1945 when it disappeared, never to be seen again.

The list of possible locations of the Amber Room include in a tunnel under a castle in the Polish city of Paslek, in caves near Dresden and at the bottom of the Baltic Sea. Despite being one of the most sought-after Nazi treasures, fans have only been able to gaze at a replica. That may have changed this week when researchers from a Polish museum found the entrance to a bunker in northwest Poland … a bunker believed to be large enough to hold the Amber Room.

"We can safely talk about a breakthrough in the search. Using professional georadar, we were able to establish the location of the underground tunnel. After excavation at the site, we actually found the hatch, which almost certainly did not open since the war."

Bartlomiej Plebanczyk told the Polish radio station RMF FM of the discovery in Mamerki, a settlement in northern Poland near the border with the Kaliningrad Oblast of Russia that was part of Germany before 1945. (Photos of the location and old photos of the Amber Room can be seen here.) During the war, Mamerki was the headquarters of the Wehrmacht Army Command and 30 reinforced concrete bunkers were built there, leading experts to long believe they were used to store looted treasures … a belief reinforced by a few people who claim to have witnessed soldiers driving vehicles into them. 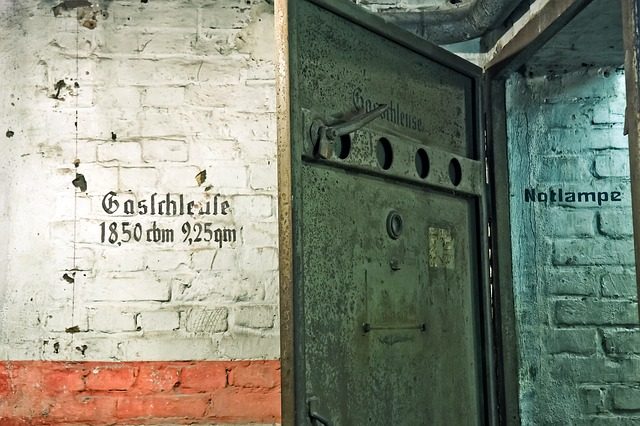 Should we believe Bartlomiej Plebanczyk? This is the same museum researcher who claimed in 2016 that he had found the Amber Room in a bunker in Mamerki, only to come up empty. What makes this bunker different? For one thing, its door is buried behind a 100-kg (220-pound) concrete slab with a large tree growing over it, indicating it probably hasn’t been touched since 1945. For another thing … well, that’s the only thing so far. Before you head for Mamerki with a load of dynamite, Plebanczyk warns that it’s under the protection of the Polish government. He himself is working through the red tape and paperwork and hopes to have permission to carefully remove the slab and open the door by the end of June 2019.

And then? About £250 million ($318 million US) in amber and treasures may be found and the fight over ownership will begin.

Or perhaps they’ll find an old knight guarding a cup. Indy, is that you?