More on the Giant Eel Controversy

If you have read my Nessie book, you'll know that I veer towards the supernatural when it come to what many of the lake-monsters of our world may be. If they're not something of a paranormal nature, however, I think the most likely candidates are (A) giant salamanders and/or (B) huge eels. And, as you may have seen, the giant eel theory is very much in the news right now. On June 18, Mysterious Universe's Paul Seaburn wrote an article titled: "The Hunt for the Giant Horse-Headed Eel Begins Soon in Ireland." That's right: the quest to try and solve the mystery of these massive, Irish beasts will hopefully soon be underway. This is not just an Irish phenomenon, though. It should be noted that a number of witnesses to the Loch Ness Monsters of Scotland said that what they encountered looked like giant eels. We'll begin with a classic (and a controversial) case from January 1934.

On this occasion, the witness was a man named Arthur Grant, of Glen Urquhart, Scotland. That Grant was a student-veterinarian, added to the weight and credibility of his report. A keen motorcyclist, twenty-one-year-old Grant was on the roads, heading home at around 1:00 a.m. when he very nearly became the first person to ever have a head-on collision with a Nessie! Fortunately, however, neither monster not motorcyclist were injured. That the night sky was dominated by a powerful, eerie moon meant that Grant had a very good view of the beast, as it loomed before him, and caught in the glare of his motorbike’s headlight. It was at a distance of around 120 feet that Grant caught sight of something unusual in front of him. Exactly how unusual it was near-immediately became apparent. 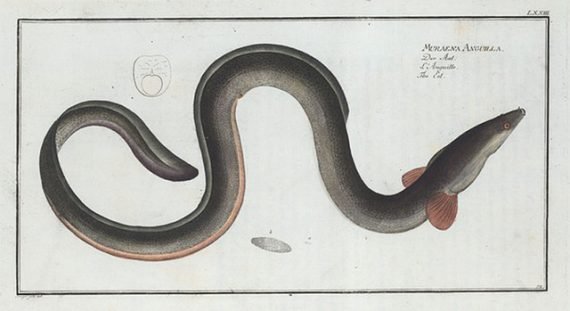 Grant said of his sighting that he was practically on top of the monster when its tiny head – sat atop an elongated neck – suddenly turned in his direction. Evidently just as shocked as Grant was, the monster made two bounds across the road, headed down to the loch and vanished into its depths with an almighty splash. Grant brought his motorbike to what was literally a screeching halt and, demonstrating his spirited character, gave chase! It was quickly clear to Grant, however, that, as a result of the huge splash, the monster had made good its escape. Nevertheless, in the time between it was first seen and when it fled for the dark waters, Grant was able to get an excellent view of his quarry.  He described the monster as having a bulky body, flippers rather than legs, and an approximately six-foot-long, thick tail that looked like it could inflict significant damage. As for its overall size, Grant suggested somewhere close to twenty-feet.

Skeptics claim that Grant fabricated the story; however, it should be noted that he was insistent that he saw a monster and even made a statement to that effect to the Edinburgh-based Veterinary Society. Given that Grant was a student-veterinarian, it seems unlikely that he would have taken the risk of recklessly lying to the Veterinary Society. A prank on the press is one thing. Risking one’s entire future career in front of the society would have been quite another entirely. Grant’s statement is an important one, as it adds some additional, intriguing data to his original report. As he said, given his profession he knew more than a bit about the world of natural history. As a result, he had pondered deeply on the nature of the monster. Interestingly, Grant said that the beast seemed to be a chimera – that’s to say a combination of several creatures. The head of the monster, explained Grant...was eel-like.

Moving on to the 21st century: On May 26, 2007 Gordon Holmes filmed, well, something, in Loch Ness. It was something that turned Holmes into an overnight media sensation – albeit a brief sensation. The day in question was dominated by heavy rain, but which cleared as the evening arrived, allowing Holmes to get clear footage of what looked like some kind of animal moving at a significant rate of knots in the waters of Loch Ness. The specific location from where all the action was captured was a parking area, on the A82 road, just a couple of miles from Drumnadrochit.  Not only that, Holmes estimated, as he excitedly watched and filmed, that the creature was around fourteen meters in length - which, if true, effectively ruled out everything known to live in the inland waters of the British Isles. Holmes, a lab technician, caught the attention of not just the British media, but also the likes of NBC News and CNN. He, and his near-priceless film, were quickly big news. Holmes said, when the media descended upon him in absolute droves, that he could scarcely believe what he was seeing. His first thought was: giant eel. Holmes told the media of the eel theory: “They have serpent-like features and they may explain all the sightings in Loch Ness over the years.”

On September 17, 2009, Jon Downes, of the U.K.-based Center for Fortean Zoology, his wife, Corinna, and CFZ colleague Max Blake took a trip to Ireland’s Lough Leane. It was during the course of the expedition that the team encountered something incredible. As Corinna notes, something very strange appeared before them: “I saw a trail left by something as it made its way from the island to the shore to the east of it… I was to be pressed for an answer I would probably suggest a large eel.” Max Blake recorded his thoughts on the encounter, too: “If I had to make a guess, I would say that it was most likely to have been a giant eel.” 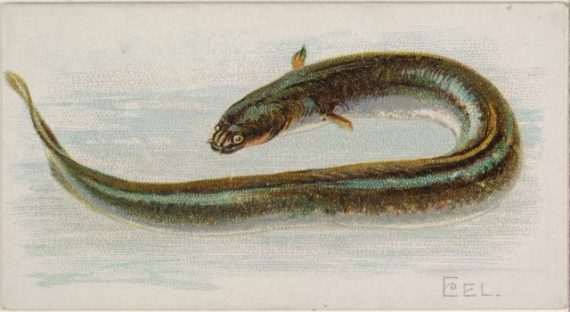 In June 2015, a huge fish was spotted by two astonished and terrified anglers on the River Nene, in the Fens, Cambridgeshire, England. One of the fishermen told BBC Radio Cambridgeshire that on the day when all hell broke loose the two friends were boating in the direction of Whittlesey, when their boat juddered – suggesting they had collided with something. But with what? They peered over the side of the boat and encountered something extraordinary: a huge creature, easily six feet in length, and possibly even slightly bigger, was swimming by. While they weren’t sure of the specific type of fish, there is no denying it was a definitive monster and hardly the kind of thing one would normally expect to see in the River Nene – or in any other stretch of English water. The two men speculated that what they had seen was a sturgeon. Not an impossibility, since sturgeon can grow to impressive sizes. But, the catfish was also offered as a potential candidate. Then there was the theory of another witness, namely that the creature was not a catfish but a giant eel.

The witness was  Michelle Cooper, who was prompted to come forward by the media publicity given to the June 2015 encounter. Her sighting, however, had occurred somewhere in the region of one year earlier. She said to the Cambridge News that some of her friends poked fun at her when she told them of her encounter with the mysterious leviathan. But, Michelle was sure that she saw something huge and daunting. Notably, while speaking with the media she noted that “when I researched what it could be I found it looked exactly like the giant eels you get in America. I was really shaken up by it.”

Let's hope that we'll soon have the answer to an important question: are many of our lake-monsters really gigantic eels?