Since mankind first took to the seas there have long been reports of dolphins lending a helping hand to our kind and even saving our lives. Tales of dolphins helping us go back centuries, with reports spanning all the way back to ancient Greece, and such accounts have continued right up into modern times. What is it that makes these creatures want to help another species, and what connection do they have with us? Let us take a look at some of the more recent bizarre cases of dolphins coming out of the blue to risk their own lives for ours.

Many of the cases of dolphins assisting humans concern these saviors warding off dangerous predators that would otherwise end up quite fatal for the victims, and there are quite a few modern accounts of this. A very widely publicized such case happened in 2004, at Ocean Beach, in the area of Whangarei, on the north island of New Zealand. On October 20 of that year, lifeguard Rob Howes, his daughter Niccy, and two friends were swimming just offshore when they were suddenly surrounded by a pod of dolphins that seemed to be aggressively trying to herd them into a tight group in the center of them. Whenever one of them tried to swim off, the dolphins would roughly push them back into the center and circle them, slapping their tails threateningly on the water in warning, and just as they thought that perhaps they were actually being attacked by the dolphins they saw every swimmer’s nightmare, the sight of a fin slicing through the water and the dark form of a great white shark. Howe would say of the unusual situation:

I just recoiled. It was only about two metres away from me, the water was crystal clear and it was as clear as the nose on my face. They had corralled us up to protect us. 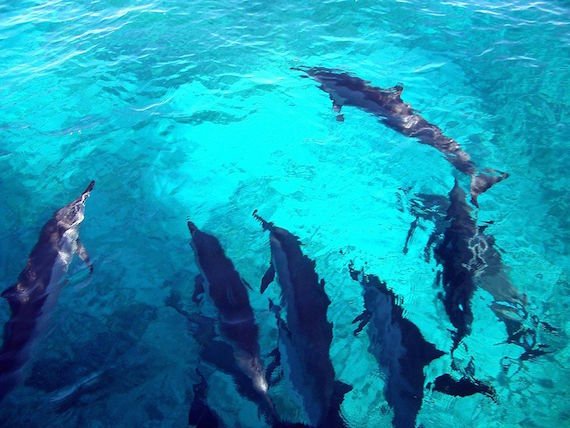 A nearby boater also saw the shark, and would later corroborate the story that the dolphins indeed did seem to be protecting the group of swimmers, circling them for a full 40 minutes until the shark realized it was not going to get to them and left. This is by no means an isolated incident, and dolphins seem to have a penchant for saving people from sharks. In July of 1996 a man from England named Martin Richardson came face to face with death in the Red Sea off Egypt’s Sinai Peninsula, in the form of a shark attack. The predator took several bites of his torso and arm, and he was resigned to these being his last moments on earth, but three bottlenose dolphins had other plans, chasing the shark off and aiding the man in staying afloat and alive until his friends reached him, after which they darted off into the depths.

In 2002, fisherman Grant Dickson was off the coast of Queensland, Australia when his trawler sank, leaving him in the water with only an overturned dingy to cling to. His two companions did not survive the ordeal, and he almost didn’t either, as sharks began ominously circling and making passes at him. That is, until a pod of dolphins came along to chase the sharks away and stay with him for the next 40 hours before help arrived in the form of a passing ship. There is also the 2003 case of wildlife filmmaker Hardy Jones, who was saved from a hammerhead shark by a pod of dolphins off the coast of Japan, with the entire thing caught on video, which you can see here. In August of 2007, surfer Todd Endris was mauled by a 15-foot long great white shark off California while sitting on his surfboard, and so vicious was the attack that his leg was completely mangled and the skin completely torn from his back. He says of it:

[It] came out of nowhere. There’s no warning at all. Maybe I saw him a quarter second before it hit me. But no warning. It was just a giant shark. It just shows you what a perfect predator they really are.

Also coming out of nowhere was a pod of benevolent dolphins, which circled Endris and kept the shark away until he could get to shore, where emergency first aid saved his life. The story made major headlines at the time, and Endris still feels as if something was looking out for him that day. Even more recently still is a case from April of 2014, when long distance swimmer Adam Walker was off of New Zealand in the Cook Strait on a grueling swim through frigid waters. At one point a shark loomed into view below him, after which a pod of dolphins arrived to keep it away, staying with the swimmer for an hour while he completed his swim, and the whole thing was captured on video by the boats following him. 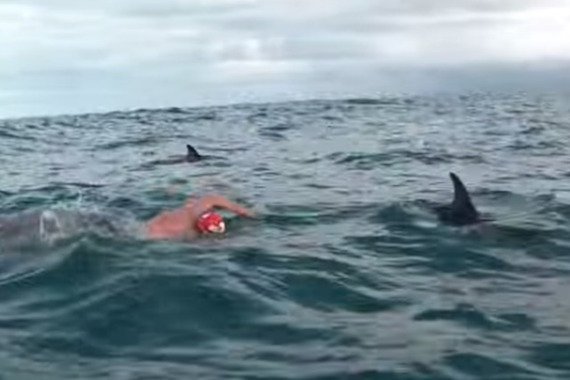 Dolphins have been known to simply keep people from drowning as well, such is the case with 14-year-old Davide Ceci, who was pulled under by a current while swimming off Manfredonia in south-east Italy. Luckily for him, a local dolphin known to frequent the area, affectionately referred to as Filippo, pushed him up to the surface and nudged him towards Davide’s father, only leaving his side when he was pulled to safety. Davide’s father would later say, “It is a hero, it seems impossible an animal could have done something like that, to feel the instinct to save a human life.”

Dolphins have been known to help people in other ways as well. In Laguna, Brazil, there is a pod of dolphins that has struck up a rather curious working relationship with the human fishermen in the area. The dolphins go about herding together fish, after which they will signal to the fishermen when to throw their nets in with head and tail slaps. In return, the fishermen will make sure to throw some of their catch out to the dolphins and it works out great for both parties. What is interesting though is that these dolphins are wild, were not trained to do this, and there is only one group of the animals out of many in the area that cooperate in this way, making it all very unique indeed. Fábio Daura-Jorge, of the Federal University of Santa Catarina, in Brazil, told LiveScience:

About 200 local artisanal fishermen are almost entirely reliant on the dolphins for catching their fish. The fishermen do not fish without the assistance of the dolphins and know the individual animals from their natural marks and can recognize them by eye. The fishermen have names for the cooperative dolphins — particular stars in this cooperation are ‘Scooby’ and ‘Caroba,’ that cooperate for more than 15 years. Dolphin societies are very complex, and social interaction seems to drive foraging behavior. It might be that the development of specialized foraging behavior occurs in small tight-knit resident coastal communities because there is a high degree of social interaction between the animals.

As with other cases of dolphins helping or saving human beings, it is unclear why they should do this or what drives them. Why should these animals from a totally different world choose to help us? One idea is that this might be actual evidence of altruism, or the capacity to feel for the welfare of other animals, in dolphins, and that their complex intelligence allows them to evaluate and judge situations to act upon this desire to help us. With the animals obviously putting their lives on the line to help another species, it certainly seems altruistic. This is a nice thought, that these intelligent animals are just selflessly helping us because they somehow want to, but there are other theories as well. Another idea is that this behavior is merely a pre-programmed response related to their instincts to nurture their own young, with the signals somehow getting mixed up. Another idea is that the dolphins are just curious and want to play, with the “help” they provide being merely an unexpected and accidental coincidence. At the moment we don't really know, but cases like this continue to come in from time to tme, showing that the animal world is more mysterious than we know.

Donald Trump Says He Was Briefed on UFOs, But “Doesn’t Particularly Believe”