Mysterious Orbs Witnessed by Many Over Kansas City

Is this any way to manage and/or (yes, it’s an and/or question these days) protect our airspace? While one side of the world is on the brink of warfare because no one can agree on the exact location where a jet-sized drone was located before being shot down, people in Missouri are in misery after witnessing two mysterious orbs fly over Kansas City and neither the police nor the weather service nor the news media nor the FAA nor the military (at least initially) seemed to know what they were. Flying Tic Tacs get their own television shows and New York Times investigations but flying Altoids get no respect. This is why the UFOlogy world continues to demand answers. What ARE those things up there?

KMBC
@kmbc
We've taken several calls in our newsroom about these two orbs spotted in the Kansas City sky tonight. This picture was taken near KCI Airport. @NWSKansasCity
9:02 PM - Jun 20, 2019

NWS Kansas City
@NWSKansasCity
We honestly have no explanation for the floating objects over Kansas City.
8:59 PM - Jun 20, 2019

A number of videos of the orbs, spotted in the evening of June 20, were posted to the Internet. (View one of the videos here.) After checking with the weather service and getting no answer, the Twitter-verse went wild (aliens, Google balloons, aliens, an invasion, aliens …) while the media checked with the usual suspects, including DARPA. This no longer requires a secret phone number or a clandestine insider … DARPA has a Twitter account too.

DARPA
@DARPA
Last night, DARPA launched 3 balloons from Cumberland, Maryland, in a flight test for the Adaptable Lighter Than Air prgm. Over next few days, ALTA will demonstrate capability for wind-borne navigation of a lighter-than-air vehicle over extended ranges. https://go.usa.gov/xy3k6
4:54 PM - Jun 18, 2019

That was confirmed by StratoCat, an Argentine website that tracks and catalogs balloon launches, which also provided a link to the FLightRadar24 website, where everyone (except the people who really need to know) can track known flights and balloons and other things in the airspace. Doesn’t the National Weather Service have better things to do than explain non-weather UFOs?

It’s amazing that in this age of real hypersonic planes and alleged faster and more maneuverable flying triangles that we’re still depending on and testing more space balloons. It’s even more amazing DARPA can’t be a little more proactive and let those on the ground know about what might be mysteriously appearing in the sky … unless that’s part of the plan. Do they want to see what a real UFO panic will look like? Do they want to see if anyone has developed drones or amateur surface-to-air missiles that can reach their balloons? Stranger things have happened. 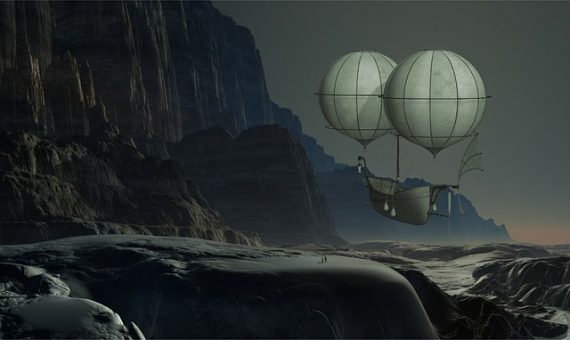 Let’s take a moment to commend people like Luis E. Pacheco, who started StratoCat in 2005 after being inspired by a UFO sighting over Buenos Aires in 1985 that he and many other Argentines believed was an alien spaceship but turned out to be … you guessed it ...  a balloon. While not all UFOs are balloons, it has been proven time and again that many of them are … secret or otherwise.

The case of the mysterious orbs over Kansas City appears to have been solved. However, the balloons are still floating over the U.S. Will the people in their flight paths find out before the next UFO report … or alien panic … or worse?

The Day a Strange Creature was Caught on Camera