For years, science fiction writers and astrobiologists have wondered what forms extraterrestrial life may take - that is, if it exists at all. While that still remains unknown, many recent discoveries made here on good ol’ planet Earth suggest that even the harshest environments on alien exoplanets may be able to sustain forms of at least microbial life. With those discoveries in mind, NASA has been funding studies as part of their official Astrobiology Strategy which seeks to explore all possibilities of what forms life may take and where it may be found. 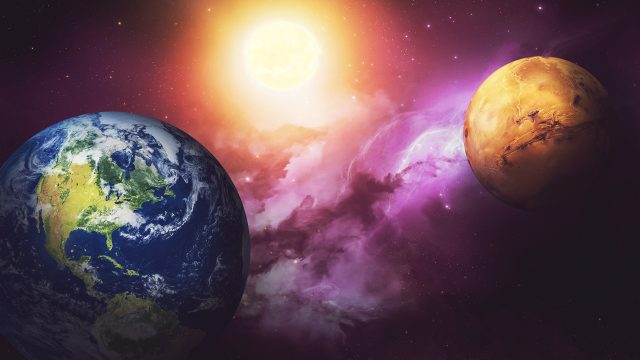 The three main questions NASA seeks to answer with its Astrobiology Strategy are “How does life begin and evolve?”, “Does life exist elsewhere in the Universe?”, and “What is the future of life on Earth and beyond?” To begin exploring answers to those questions, University of Illinois at Urbana-Champaign geobiologist Bruce Fouke and colleagues recently traveled to Mammoth Hot Springs in Yellowstone National Park to study how microbial life forms in these hot, low-oxygen environments.

Fouke and 20 recently published the results of their study in the journal Astrobiology, describing how tiny microbes in these harsh environments are able to form strange pasta-looking “mats” that spread outward from the rocks of Mammoth Hot Springs. Over time, these microbes actually change their physical and chemical structure of the rocks, leaving behind tell-tale biomarkers. Thus, studies of these pasta-like microbes may enable astrobiologists to better detect similar biomarkers on other worlds or moons even if the lifeforms that left them have been dead for millennia.

We may all be hoping for green-skinned bipedal humanoids, but the fact is we have no Earthly idea what unearthly forms life on other worlds may take. The first alien life we find (if we find it at all) may resemble a pile of leaves, a tornado, or a slime mold - that is if it even is visible to the human eye at all. Think about it: we’ve only known about microscopic life on Earth for roughly 350 years - nowhere near even a blink of an eye on an evolutionary or cosmic scale.

Furthermore, given what we’re discovering about dark matter and dark energy, there’s no telling what exotic forms of life may exist in the unimaginable expanses of the universe. It’s entirely possible that alien life could be composed of completely different forms of matter and energy than human beings - some of which we may have yet to identify or detect.

Might alien life on some distant exomoon resemble pasta? Sure, but it’s just as likely that those same aliens could be perceived by humans as a symphony, a psychedelic blur of swirling lights, or a rush of hot air. The point is we have no idea. The history of science shows us that paradigm shifts happen, radically changing our notions of life or the universe. Alien worlds aside, could there be forms of life here on Earth that humans remain unaware of? Just ask Antonie van Leeuwenhoek.