In every war there are often lesser known experiences floating about beyond the typical tales of fighting and heroism. Here in the background of all of the conflict and death often lurk outlandish accounts of something strange going on, something perhaps even more frightening than the enemy. Here we will look at a selection of very weird accounts of encounters with mysterious humanoid creatures and entities during the tumultuous Vietnam War, and whatever they were they remain interesting enigmas that go mostly forgotten among the more well-known stories of valor and combat.

I received some pretty wild claims in the wake of my article on Rock Apes in Vietnam that seem to go quite well off the beaten path of hairy hominids into some pretty bizarre territory. In one report, the witness claims that he was north of the DMZ on patrol when his platoon came across something rather odd out there in the wilds. They saw up ahead through the trees a procession of humanoid beings that seemed to be around 7 feet tall, with bald heads and skin that twinkled and glowed in the night. The witness says:

The guy up front gives the sign to halt and points off through the trees, and we can all see that something is illuminating the night up there. We squint through the foliage and can see four figures seeming to march in procession through the wilderness, but these people or whatever they were had this aura around them, like moonlight. They had no hair on their heads, that much we could tell, but other details were more obscure as we were trying not to be seen by them. They were completely silent, not seeming to disturb the surrounding brush at all, and they completely ignored us as they silently marched off into the night. Was it ghosts, spirits, or what? I still have no idea. 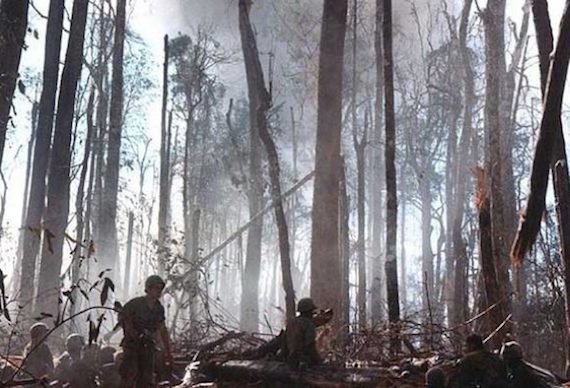 Another even more frightening account was relayed to me personally, from a vet who says he had an experience out in the jungles of Vietnam that has always haunted him. He says that in 1969 he was out on a routine patrol in an undesignated area when he saw ahead two piercing orbs of light that put him on immediate edge. He crouched and drew up his rifle, not knowing what was going on, and signed to the rest of his patrol to lay low as well. Then, as they watched, something very outlandish bloomed out of the darkness. It was described as being a hunched over, pale humanoid, completely hairless but with apelike features and noticeable teeth protruding from a muzzled jaw. The witness says:

I don’t really know how to describe it. It’s body looked sort of like Gollum from the Lord of the rings, but it had this distended jaw full of fangs that we could see even from a distance off. It was pale and seemed to almost emit a faint light of its own, like some sort of bioluminescence. It was the goddam strangest thing I’ve ever see. Then it seemed to sense us, looked our way, sort of sneered, and then was gone like a shot. No idea where it went, and we weren’t about to try and follow.”

There is also the account from a witness who says that his platoon was circled night after night by a group of smallish humanoid creatures described as being around 5 feet in height, and which seemed to have the ability to float through the air at will. He says that the creatures looked almost ape-like, but had strange yellowish fur that seemed to glow, and that they could leap through the air only to come gliding down as if endowed with some sort of anti-gravity device. Weird to be sure. 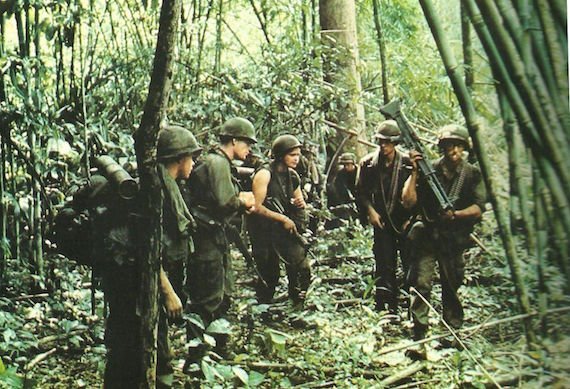 Another otherworldly and rather well-known account covered by the legendary Art Bell allegedly occurred on December 17, 1974, when a platoon of soldiers was out on a search and destroy mission along a river just north of the DMZ in the early morning hours. The platoon had penetrated through a heavily wooded river bank to reach a clearing and it is then that they noticed that the area was strangely silent and devoid of the typical jungle sounds and its incessant drone of insects, animals, and birds. Sensing that this was bad news, a scout was sent ahead to see if enemies were in the vicinity but nothing was found, not even any tracks. In the meantime, as the eerie, almost oppressive silence continued some piles of what appeared to be dung from some large, unidentified animal were found scattered about the clearing and as the soldiers examined them there were heard crashing sounds from the thick brush. The platoon allegedly looked up to see several large humanoid creatures come lumbering out of the trees and brush which were unlike anything any of them had ever seen. The creatures were estimated as being around 8 feet in height, with a bright yellow coloration and three-fingered hands that ended in wicked looking talons. The faces of these strange beasts were flat and sported large eyes, with only a couple of slits for a nose.

These giant, yellow-skinned beings were reported as passing right by the platoon, seemingly not even paying any attention to them at all, but when the frightened soldiers began to get out of there the loud sounds of crushing brush could be heard behind them and they realized that whatever the creatures had been were following them. As the increasingly unsettled men picked up their pace and broke into a run the crashing became more frantic and ominous, as if the giants were closing in for the kill. Several of the men reportedly fired their weapons at their pursuers to no apparent effect, with the creatures barely flinching even when hit with armor piercing rounds. The men were now running as fast as they could towards their boat moored at the riverside, sporadically firing ineffectually behind them as the beasts closed in. They finally reached their boat and beat a hasty retreat, and as they left they purportedly saw the haunting sight of dozens of the huge humanoids gathered on the shore watching them leave. What in the world did these men see? We may never know. 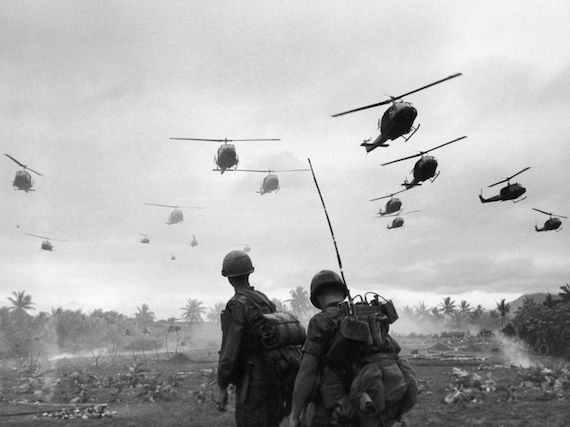 Another case comes from 1967. On October 12 of that year, a 6-man long range recon patrol was operating in a heavily jungled region near the North Vietnam border and they set up camp a night defense perimeter that evening, with the men taking turns sleeping as the others maintained a lookout for the enemy. At around 1:45AM, the leader of the patrol was on watch and claims that he saw movement nearby, after which he woke the other men and they prepared their weapons for a potential firefight.

As the patrol geared up and turned their eyes to the dark jungle, a very strange creature emerged from the murk. It was described as looking like a small, grey humanoid with enormous black eyes, a long face, and slender arms, which gave off a faint glow that pushed back the clinging darkness around it. One of the men allegedly did not hesitate to fire at the creature, hitting it squarely in the head to send a “brilliant blue syrupy fluid” spattering the foliage. At that moment three lights appeared in the sky to form a perfect triangle before darting off into the night sky. It would later become known that two other recon teams operating in the area had had similar strange encounters that evening, and that headquarters were claiming that it was hard to keep radio contact due to some sort of communications disturbance. Aliens or a tall tale?

In the end it is hard to know what to make of such accounts. What could we possibly be looking at here? It seems interesting to consider the idea long championed by te researcher John Keel, who believed that cases such as these might be classifiable as some sort of interdimensional phenomena, with these entities crossing over from some alternate reality. Could these be some sort of interdimensional interlopers, or is there something else going on? It is difficult to say for sure, and reports like these remain mere anomalies amongst all of the tales of valor and battle in the war zone.

The Joke’s On You: How Late-Night Comedy Helped Modernize the UFO Debate