Supernatural Phenomena in the Skies of Cuba (Well, Almost…)

As a result of the seriously fraught situation that existed between the United States and Cuba in the early 1960s, U.S. intelligence did its utmost to try and find ways to oust Fidel Castro from power. One such early-1960s-era operation is almost hard to believe. It revolved around the faking of a supernatural entity in the skies over Cuba. It provides us with an example of how the world of the paranormal was utilized by intelligence agencies to do its utmost to manipulate world events. Before we get to the program itself, a bit of background data is required. Staff at the John F. Kennedy Presidential Library say: “In 1959, Fidel Castro came to power in an armed revolt that overthrew Cuban dictator Fulgencio Batista. The U.S. government distrusted Castro and was wary of his relationship with Nikita Khrushchev, the leader of the Soviet Union. Before his inauguration, John F. Kennedy was briefed on a plan by the Central Intelligence Agency (CIA) developed during the Eisenhower administration to train Cuban exiles for an invasion of their homeland. The plan anticipated that the Cuban people and elements of the Cuban military would support the invasion. The ultimate goal was the overthrow of Castro and the establishment of a non-communist government friendly to the United States."

The CIA provides important data on the U.S.-Cuba situation in this same time-frame: “The establishment of a Communist state 90 miles off the coast of Florida raised obvious security concerns in Washington and did not sit well with President Eisenhower. In February 1960, Cuba signed an agreement to buy oil from the Soviet Union. When the U.S.-owned refineries in the country refused to process the oil, Castro seized the firms, and the U.S. broke off diplomatic relations with the Cuban regime. To the chagrin of the Eisenhower administration, Castro established increasingly close ties with the Soviet Union while delivering fiery condemnations of the U.S. The American-Cuban relationship deteriorated further when Castro established diplomatic relations with our Cold War rival, the Soviet Union. Castro and Soviet Premier Nikita Khrushchev signed a series of pacts that resulted in large deliveries of economic and military aid in 1960. Within a year, Castro proclaimed himself a communist, formally allied his country with the Soviet Union, and seized remaining American and foreign-owned assets. Eisenhower authorized the CIA to conduct a covert operation to rid the island of its self-appointed leader. The CIA formulated a plan to recruit Cuban exiles living in the Miami area. It would train and equip the exiles to infiltrate Cuba and start a revolution to ignite an uprising across the island and overthrow Castro.” 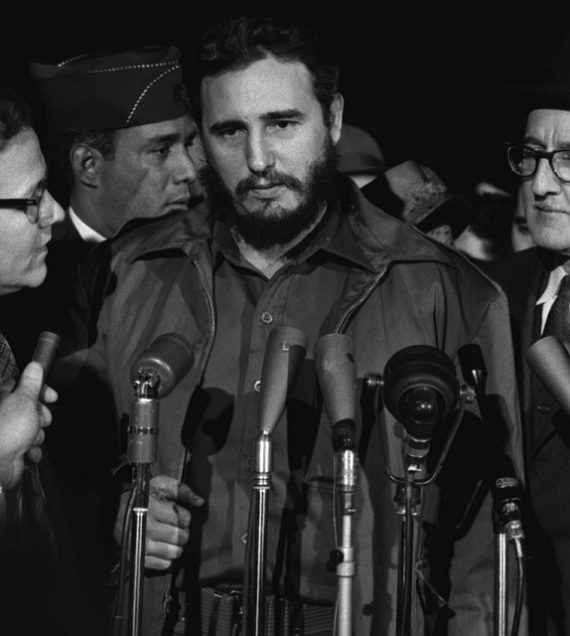 It didn't work out quite like that, as the ill-fated, disastrous outcome of the Bay of Pigs invasion of April 1961 - designed to get rid of Castro - demonstrated. Things got worse in October 1962. That was when the Cuban Missile Crisis almost plunged the world into a civilization-ending nuclear war. It was in this period that a military figure, renowned for his ability to think out of the box to an incredible degree, got involved in the attempts to have Castro removed from power. That man was Major General Edward Geary Lansdale. His career was long, notable and extremely alternative. In the Second World War, Lansdale spent a great deal of time working for the Office of Strategic Services. The OSS – with its spies and “secret-agents” – was the inspiration for the CIA, which was created two years after the end of the war.

When Hitler and his hordes were finally defeated, Lansdale headed off to the Philippines, specifically to Headquarters Air Forces Western Pacific. Eight years later, he took a position in the Office of the Secretary of Defense. Lansdale became the Deputy Assistant to the SoD. It was while he was in the office that Lansdale really demonstrated his flair for all things off the wall. Perhaps the weirdest of all of Lansdale’s strange ideas was a plan to fake a “Second Coming” of Jesus Christ in the skies over Cuba! The story can be found in a November 20, 1975 document with the lengthy title of Alleged Assassination Plots Involving Foreign Leaders: Interim Report of the Select Committee to Study Government Operations with Respect to Intelligence Activities. It contains the curious testimony of a man named Thomas A. Parrott, who died at the age of ninety-two in 2007. Parrott was, as the staff that run the website of the Arlington Cemetery, note: “…a former official with the Central Intelligence Agency and a member of several hospital boards and citizen group. Mr. Parrott spent 24 years with the CIA and was Assistant Deputy Director for National Intelligence Programs. Early in his career, he was Deputy Chief of the Soviet Division of the Clandestine Services Unit, a base chief in Germany and an assistant to CIA Director Allen Dulles.”

As far as Lansdale’s mind-blowing idea is concerned, Parrott had this to say to the Select Committee in 1975: “I’ll give you one example of Lansdale’s perspicacity. He had a wonderful plan for getting rid of Castro. This plan consisted of spreading the word that the Second Coming of Christ was imminent and that Christ was against Castro who was anti-Christ. And you would spread this word around Cuba, and then on whatever date it was, that there would be a manifestation of this thing. And at the time – this was absolutely true – and at the time just over the horizon there would be an American submarine that would surface off of Cuba and send up some star-shells. And this would be the manifestation of the Second Coming and Castro would be overthrown.”

For those who may not know, star-shells are powerful flares used by military agencies, chiefly to light up the night-skies. Lansdale didn’t just bring star-shells to the table, however. His plan was to recruit a crack-team of U.S. Navy personnel who would be integral players in the operation. They would approach the coastal areas in fleets of small submarines, which would then project huge pictures of Jesus onto the clouds over Cuba, and as close as possible to the capital city of Havana. Lansdale was still not finished. He also planned to have compact aircraft fly with their engines muffled and hidden by those same clouds – and then broadcast the “voice of Jesus” via a number of powerful loud-speakers. The message was going to be clear and to-the-point: renounce Castro and embrace the West. The operation, however, proved to be too difficult to successfully execute and it was ultimately shelved. Without doubt, one of the strangest projects of the Cold War!

The Mysterious Cursed Shipwreck of the Gulf of Mexico