Based on a new study (which can be read here), NASA announced that they found evidence of sodium chloride – which is a huge component found in sea salt and table salt – located on the surface of Jupiter’s moon Europa. This means that the subsurface ocean on Europa is quite similar to the oceans found right here on Earth.

Even though Europa’s ocean is underneath an icy crust, the sodium chloride can still be found on the surface of the moon because of cracks or even potential geysers. Although it was previously thought that magnesium sulfates were present on the moon’s surface, scientists used a visible-wavelength spectroscopy to detect the sodium chloride. 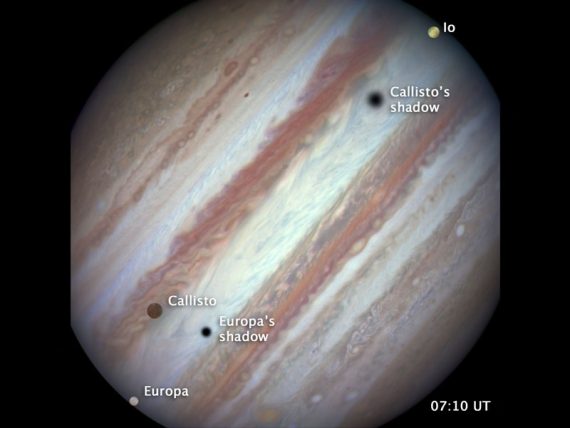 In order to prove that what they viewed was in fact sodium chloride, testing was conducted on similar ocean salts from here on Earth. The ocean salts were introduced to the same airless atmosphere that’s on Europa, as well as the same amount of radiation. What happened was that the salt changed to a yellowish color – the same color that was found on an area of Europa called Tara Regio.

There is another possible explanation and it’s that the sodium chloride could be part of different layers that were formed on the moon’s surface, meaning that it didn’t come from the subsurface ocean. More studies will have to be conducted in order to find out for sure where the sodium chloride came from. If it did in fact come from the subsurface ocean that would mean that the ocean floor remains hydrothermally active. And if it is hydrothermally active, there could possibly be living organisms there.

NASA’s Cassini mission collected data from Saturn’s moon Enceladus and it is believed that it also has hydrothermal vents on the ocean’s floor. In fact, based on water vapor samples collected by the spacecraft, they found salts and several organic molecules in Enceladus’ ocean. Future space missions will focus on possibly finding life on Enceladus as well as Europa.

It’s incredible to think that moons so far away from us could have oceans that are very similar to our own. Not to mention that there could be a tiny possibility that living organisms could be present on those moons.