The House of Creepy Haunted Mannequins

For years if one were to go to the vicinity of the New Hamburg train station in New York, there would be quite a sight awaiting them. There gathering dust and cobwebs, abandoned to the elements, squats a spooky old house called the John Lawson House, originally built in 1845 and one of six structures still remaining in what is called the Main Street Historic District. The wood framed property looks old, worn-down, and very much like a haunted house out of a horror movie or a nightmare, looking just about as creepy as can be, and what makes it all even creepier are the strange inhabitants that once lounged about its porch. Until very recently there sitting upon the weathered wooden deck, was a group of life-sized female mannequins sat out as if enjoying the day, dead eyes staring out into nothingness, yet these were no ordinary mannequins, and they were long one of the strangest, creepiest oddities the area had to offer.

The mannequins themselves were full-sized, all female, and meticulously dressed in old-fashioned twentieth century clothing. They were arranged into various poses, and in their hands and on their laps they held myriad of eclectic items, ranging from books, towels, brushes, mirrors, milk containers, and cups, to more unusual items such as birdcages, satchels of potpourri, or even slingshots. These creepy mannequins sitting out in their period clothing and with their motley collection of odd objects might be unsettling enough as it is, but this is just the beginning of the strange story of the Lawson House mannequins.

What really makes it a sort of unsolved mystery is that during their time at the house they were known to mysteriously change positions, the items they held, and even by some accounts their facial expressions for reasons no one seems to be able to figure out. Sometimes their hands would be in strange positions as if making arcane gestures, or arranged to point or look off towards a location they only seem to know or to be able to see. According to some, these different positions may have even held hints or clues to a larger riddle or story. Likewise, the clothing and hairstyles were known to change from day to day as well, often fitting a certain theme. Even the number of mannequins present would change from day, and on rainy days they’d be completely gone. In some cases, the position and number of the mannequins, as well as their props and clothes would change several times within the same day, yet the thing is that the house is supposedly abandoned and no one ever witnessed anyone come there to tinker with the mannequins.

For all appearances they seemed to be moving and changing positions on their own when no one was looking, and the mystery of the moving mannequins and the meaning behind it all turned the John Lawson house into one of the eeriest tourist destinations in the region. People would flock here to take pictures of the mannequins day by day and try to peer into the murky house out of macabre curiosity, and the whole time those mannequins just stared with those cold, dead eyes. Who or what was moving these mannequins and why? No one knows. 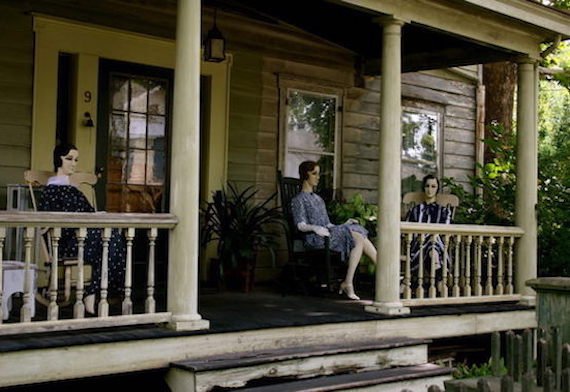 The local lore is that the dark history of the house itself has something to do with it all. John Lawson House is one of only two historic structures from its era in the area that survived a catastrophic fire that once tore through here. This is telling, as the mannequins were said to often be arranged to be looking off at the vicinity of the fire or at that other old surviving house that shares its era. There is also a disaster that struck here in the winter of 1871, when a train heading to the New Hamburg Station crashed just about 200 feet from the house, killing 22 people on board. As with the fire, it was apparently not unusual to find the mannequins positioned to be looking off towards or pointing to that crash site as well. Such grim history has helped to fuel the stories that the mannequins are actually haunted, their movements governed by supernatural forces, and which is further fueled by locals telling of sometimes seeing a faint glow of life from within the unoccupied house at night or orbs in the garden.

Of course the more rational explanation is that someone was simply doing this covertly as some sort of prank or art project, although it remains a mystery as to how they could so thoroughly change the mannequins’ positions, hair, items and clothing or even haul them off in the rain on such a regular basis without ever being seen in the act. Also, why would someone go through all of that trouble in the first place, day after day without fail? Was it meant to be some sort of riddle or to make a statement? It is a shame that we will probably never know, because in 2016 the mannequins were moved to another house away from prying eyes for reasons unknown, leaving the John Lawson House just a husk from another time, its only company now gone.