The Mysterious Brain-Eating Bear of Africa

From the wilds of East Africa have long come reports from the native tribes of the region and explorers alike of a large, powerfully built beast somewhat like a bear, and which is indeed commonly called the Nandi Bear, named after the region’s Nandi tribe, although it has countless regional names such as the Duba, Ngoloko, Chimosit, Kikambangwe, Chimisit, Vere, Kerit, and Sabrookoo. The creature is said to be lion-sized, and to have a sloping back, with hind legs shorter than the front, sort of hyena-like in this respect, and is equipped with ferocious claws, the whole of it typically covered with shaggy brownish red or dark-colored hair. A common feature of accounts is that they are prone to walking about on their hind legs, especially when aggravated. The Nandi Bear is traditionally not regarded as a particularly shy or benevolent creature of the forest, and the tribes of the area tell of its aggressive habit of attacking people, with the disturbing detail in some traditions that it likes to devour the brains of its victims, earning it the rather macabre nickname “The Brain-Eating Bear.”

The Nandi Bear is far from some boogieman stalking the night of African folklore, and it has allegedly been seen by outsiders for centuries, particularly in Kenya. Many of the best reports come from the early 1900s, when colonization and exploration of the African continent was in full swing. In 1912 there was a report from a military settler named Major Toulson, who allegedly saw one of the beasts lurking about his remote farm upon the Uasin Gishu plain. Toulson would relate his sighting to British anthropologist C.W. Hobley, saying:

One of my boys came into my room and said that a leopard was close to the kitchen. I rushed out at once and saw a strange beast making off: it appeared to have long hair behind and was rather low in front. I should say it stood about 18 in. to 20 in. at the shoulder; it appeared to be black, with a gait similar to that of a bear--a kind of shuffling walk. 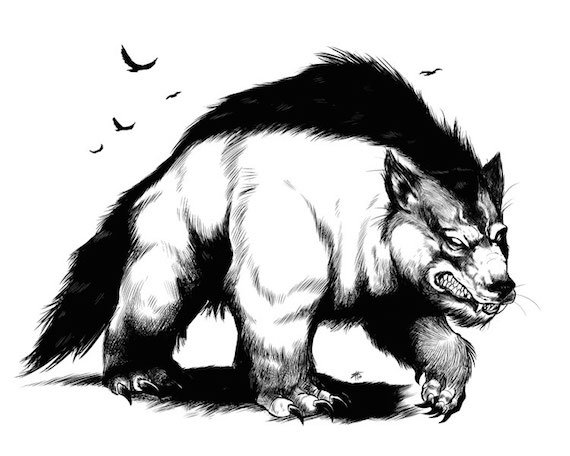 Interestingly, there were other sightings around the same area, such as a report from District Commissioner N.E.F. Corbett, who in March of 1913 also saw the beast as he was having lunch by the river just below Toulson’s farm. He says that as he was making his way along the water’s edge he practically stumbled right into one of the creatures, and he would say of the frightening incident:

I was having lunch by a wooded stream, the Sirgoi River, just below Toulson's farm ... to my surprise I walked right into the beast. It was evidently drinking and was just below me, only a yard or so away ... it shambled across the stream into the bush ... [I] could not get a very good view, but am certain that it was a beast I have never seen before. Thick, reddish-brown hair, with a slight streak of white down the hindquarters, rather long from hock to foot, rather bigger than a hyena, with largish ears. I did not see the head properly; it did not seem to be a very heavily built animal.

Also in the early 1900s was the report from explorer Geoffrey Williams, who had his own encounter with the Nandi Bear and published it in the respectable Journal of East Africa and Uganda Natural History Society. Williams gives a rather detailed account of the creature, describing the sighting as follows:

I was travelling with a cousin on the Uasingishu just after the Nandi expedition, and, of course, long before there was any settlement up there. We had been camped near the Mataye and were marching towards the Sirgoit Rock when we saw the beast. I saw a large animal sitting up on its haunches no more than 30 yards away. I should say it must have been nearly 5 feet high . . . it dropped forward and shambled away towards the Sirgoit with what my cousin always describes as a sort of sideways canter. I snatched my rifle and took a snapshot at it as it was disappearing among the rocks, and, though I missed it, it stopped and turned its head round to look at us. In size it was, should I say, larger than the bear that lives in the pit at the "Zoo" and it was quite as heavily built. The fore quarters were very thickly furred, as were all four legs, but the hind quarters were comparatively speaking smooth or bare. . . the head was long and pointed and exactly like that of a bear. I have not a very clear recollection of the ears beyond the fact that they were small, and the tail, if any, was very small and practically unnoticeable. The color was dark. 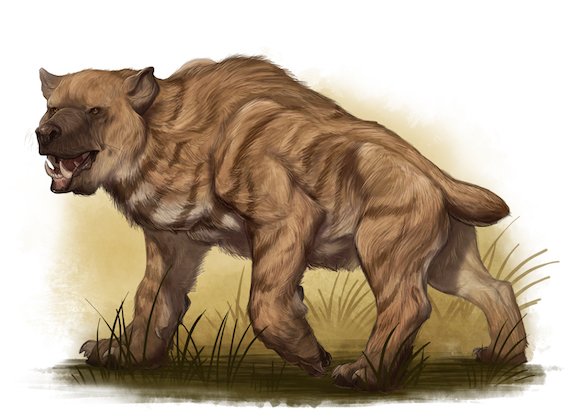 Another report from around the same time was made by two reputable and seasoned Kenya colonists by the names of Major Braithwaite and Mr. C. Kenneth Archer. The two men claimed that they had taken the creature to be a lioness when they first saw it, but that they had soon realized that it was more bear-like in nature and that the snout was all wrong for a lion. It apparently stood nearly 5 feet tall at the shoulder and had a sloping back. They would say:

The back sloped steeply to the hindquarters and the animal moved with a shambling gait which can best be compared with the shuffle of a bear. The coat was thick and dark brown in color. Finally, the beast broke into a shambling trot and made for a belt of trees near the river, where it was lost.

There were purportedly frequent run-ins with these mysterious beasts during the construction of the remote Magadi Railway, which penetrated right through wild, uncharted wilderness. It started with scared workers turning up strange tracks they had not seen before, which had a long heel, five toes, and which measured 8.5 inches long. Various workers and locals on the project then began to report having seen a bear-like animal with a mane, long, wicked looking claws that stood about 6 feet tall, and which often stood upright up on its hind legs. The most well-known of these accounts was given by the head engineer of the project himself, a G. W. Hickes, who saw it while moving along on a motor trolley. As he travelled along he spotted what he at first took to be a hyena out in the scrub 50 yards away, but as the trolley drew nearer he could see that this was something altogether different. He would say of his strange encounter:

It was almost on the line when I first saw it and at that time it had already seen me and was making off at a right angle to the line. As I got closer to the animal I saw it was not a hyena. At first I saw it nearly broadside on: it then looked about as high as a lion. In color it was tawny--about like a black-maned lion--with very shaggy long hair. It was short and thickset in the body, with high withers, and had a short neck and stumpy nose. It did not turn to look at me, but loped off--running with its forelegs and with both hind legs rising at the same time. As I got alongside it, it was about forty or fifty yards away and I noticed it was very broad across the rump, had very short ears, and had no tail that I could see. As its hind legs came out of the grass I noticed the legs were very shaggy right down to the feet, and that the feet seemed large.

In 1919 a village in the area was apparently terrorized by one of the monsters, with whatever it was killing off scores of sheep and eating only the brains to leave the rest behind, with 57 sheep and goats found in this gruesome state over a 10-day span. Another village in Uasin Gishu would have even more tragic news in 1925, when a village girl was grabbed and pulled through a fence of thorns that surrounded the area to keep lions out, but her body could not be located. Word got out about the girl’s attack and vanishing and the Colonial authorities brought in an officer with the Intelligence and Administrative Services of East Africa by the name of Captain William Hitchens to venture out into the wilds to hunt the mystery animal down and try to at least find out what had happened to the missing girl. One evening, as he was camping out with his dog, Hitchens would hear an otherworldly ear piercing shriek, after which he allegedly exited the tent to find that his dog had been yanked clear of its tether and dragged into the wilderness to leave a gory trail of blood and bear-like tracks larger than any lion’s. The unsettled Hitchens would later describe the cry he had heard, saying “The sheer demoniac horror of it froze me still. Never have I heard, nor do I wish to hear again, such a howl.”

As stories of the Nandi Bear trickled out to the rest of the world, it drew the attention of hunters and explorers, and there would be some accounts of having shot at or even killed specimens, but no carcass or physical evidence was ever put forward and the animal has remained cryptic. Indeed, it has not been sighted very often in recent years at all, with the last good account coming from a man who claimed that one of the creatures chased him as he was camping in 1960. We are left to wonder if the Nandi Bear is even still around to discover, and speculation has run rampant as to what it could actually be.

The main thing that has to be remembered that Africa has no extant species of bear, with its only such animal, the Atlas Bear, having gone extinct in the early 1800s and never known to have ranged as far south as the Nandi Bear. another idea has been that these are mis-identification of hyenas, but that seems odd since these witnesses were familiar with the known wildlife of the area so if they had seen a hyena why wouldn’t they just say they saw a hyena? It could also have been other misidentified animals such as a primate or even a giant anteater, but again, in many of the best reports we are dealing with people very familiar with the land and its wildlife. It could also be that the Nandi Bear represents some new species, or that it is, or at least was, a relic population of an extinct species, perhaps something like the prehistoric short-faced hyena (Pachycrocuta brevirostris) or the massive prehistoric ungulate called the Chalicothere, supposedly going extinct in the Pleistocene Era. It is sad to think that since there are no more modern day reports this creature may be gone for good, whatever it was, and the Nandi Bear remains a mystery.

Woman Faints At Haunted Museum After Being Touched By Mysterious Orb