The Mysterious Cursed Shipwreck of the Gulf of Mexico

Deep down in the waters of the Gulf of Mexico lies a graveyard of forgotten history. Littering the bottom like fossils from another era are an estimated 4,000 shipwrecks, ranging from 18th century vessels to sunken German U-boats from World War II, all doomed to remain out of sight and confined to their respective corners of history, remarkably preserved down in the cold murky waters like ancient insects in amber, sometimes in thousands of feet of water within perpetual darkness. This plethora of wrecks from so many different eras has made the Gulf a haven for wreck hunters and scientists, and occasionally a truly mysterious discovery will be made down in the depths. Such is the case of a mysterious unidentified shipwreck from the 1800s which by some accounts might even be actually cursed, haunted, or both.

The wreck in question was first stumbled upon by ExxonMobil in 2003, when they came across a previously unknown wreck as they were laying an oil pipeline some 30 miles offshore from the mouth of the Mississippi River. The wreck was of immediate interest to researchers at Texas A&M University and the National Oceanic and Atmospheric Administration (NOAA), but considering that it was buried down three-quarters of a mile below sea level it was a daunting task to get at it and investigate with divers. Preliminary excursions with robotic submersibles showed that the amazingly intact ship was a 65-foot-long wooden sailing vessel, probably from the early 1800s, although whose it was or why it was there are still impenetrable mysteries. 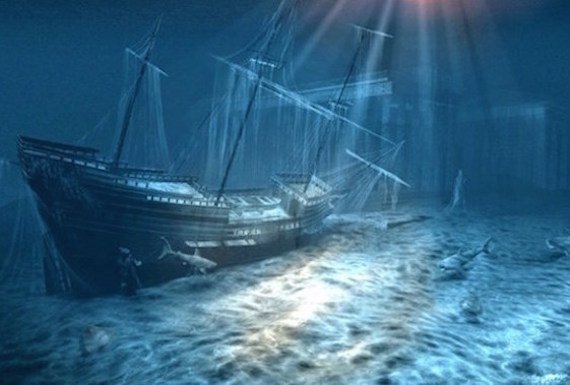 Efforts were made to try and get closer to the wreck and see if they could try and retrieve any artifacts from it, and it was here when scientists would begin to run into a series of freak mishaps and occurrences that kept them from their goals and seem beyond mere coincidence. On three separate occasions first attempts to send the robotic submarine down to the wreck were thwarted by all manner of malfunctions and difficulties. The hydraulic system would go on the fritz, the docking mechanism at the end of a 5,000-foot-long cable failed to engage, electronics malfunctions popped up out of nowhere and video screens went blank. When the wreck was finally approached the sonar experienced glitches, refusing to work even when the system was turned off and rebooted, and additionally the sub’s camera also experienced glitches, none of which could be explained by the crew and engineers. It would also turn out that the sub’s robotic arm wouldn’t work properly either. One of the head researchers, Brett A. Phaneuf, would tell the New York Times of this unusual number of malfunctions, saying, “There's bad voodoo out here. Everything that can go wrong has.”

Despite the ongoing mishaps, the team was able to learn that the mysterious vessel was covered in hand-nailed copper plating, which was an artifact of a bygone age in the late 1700s and early 1800s of plating vessels to deter wood eating pests and to serve as armor for warships. It was speculated that this vessel could have even been a warship sunk in the Battle of New Orleans in the War of 1812, but this was about as far as they got considering their sub was constantly refusing to work properly.

The “curse” would apparently continue when the investigation was handed off to a Navy research vessel called the NR1. A sub was put into the water and immediately malfunctioned, veering off out of control and then getting its tether caught in the ship’s propellers. The rover was subsequently smashed against the side of the ship and completely destroyed. They were finally able to get another rover down there and were even able to pick up a piece of the wreck’s stern post, but as the sub was making its way back to the surface the arm’s hydraulic system shut down and the artifact slipped out of its grasp away back down to join the wreck down there in the gloom, leading one researcher to lament, “We spent two days looking for that. Never found it again.” 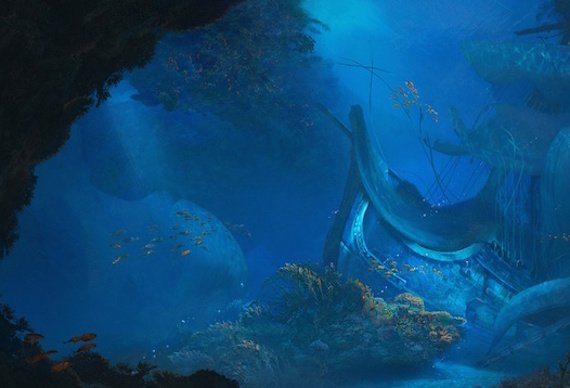 Research would pass over to the National Oceanic and Atmospheric Administration, who also experienced all manner of freak accidents. As soon as their ship left port they were forced to abort the mission when the propeller was damaged by a piece of floating debris, and on a second try the propeller locked and they had to return yet again. In the meantime, a group of government researchers offered to stop by the wreck, only to have their ship almost sink when a prop shaft broke off to penetrate the ship and flood the engine room, at the same time damaging the sub rover as well. The next time a rover was put into the water to examine the wreck, it experienced a leak in the electronics system and shorted out.

To this day the stubborn wreck has not been successfully explored, and the only artifact researchers have managed to procure from it is a single scrap of copper plating. That’s it. They know that it is a double masted wooden ship covered with copper plating and that it was probably built in the early 1800s, but other than that your guess is as good as anyone else’s. It is unclear whether this shipwreck is really "cursed" or not, but it is intriguing that it should be so seemingly resistant to being explored. There are plenty of other shipwrecks in the Gulf that have been investigated and analyzed without incident, so why should this one have so much trouble orbiting it? It is impossible to say, and for now it still lies down in the dark as it always has, perhaps daring us to come and try to glean its secrets.