The Mysterious Forest of Latvia

Out in the remote wilds of the country of Latvia, in a stretch of woodland located just outside of the city of Riga, is a place called Pokaini forest, also often called “The Valley of Spirits” by locals. This is a locale that has long been steeped in magic and myth, once thought to be the home of druids, faeries, nymphs and other assorted spirits, monsters, and entities, with the very trees, rocks, and the land itself imbued with mystical properties. Long considered a sacred place, it is said that there was a time when pilgrims made their way here to try and cleanse away their sins, leaving rocks behind to signify their burden being released, and it was thought that the power of this place held the power to heal all manner of illness and injury. Yet, is there anything to this beyond legend and myth, or is this mysterious forest truly permeated with forces beyond our understanding?

The Pokaini forest has certainly been ground zero for all manner of purported strange phenomena. Here among the ancient looking trees have been seen orbs of dancing light, strange figures that vanish at will, and other apparitions, many of which have been frequently photographed in the area. One visiting the forest might also find that compasses don't work here, watches get stuck in time, and that electrical equipment is prone to malfunctioning or dying, as well as batteries suddenly drained of all charge within seconds. Visitors have claimed that there are strange zones of silence that dot these wilds, where the sounds of the forest cease to exist and where a whisper can travel long distances through the still air. It is not uncommon for people to complain of having experienced bouts of dizziness or disorientation here, or of episodes of lost time, but there are also reports of feeling energized and rejuvenated in the forest. Interestingly, it is claimed that for people walking through the forest the pulse increases by 7-10 beats per minute for reasons unknown. Besides physical effects on humans, the trees also grow in strange configurations or at times display foliage on just one side, and this is all just the beginning of the forest’s many supposed mysteries. 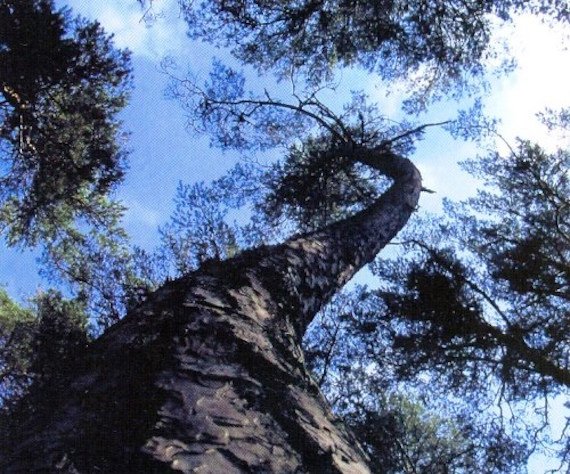 One of the most curious features of Pokaini Forest are its mysterious mounds of rocks and boulders that can be found interspersed beneath the rays of light sifting down through the twisted branches of the trees above. There are around 30 such hills, with the rocks carefully arranged, and the origins of which are a complete mystery. No one knows who created these rock mounds or why, but it is known that they were not used for burials, as those who have investigated them have found no signs of human remains. It is said that these rocks are loaded with healing energies and it is here where the sick come to be healed, although some of the rocks are conversely said to be dangerous if handled. Adding to the mystique of these rock piles is that it is claimed that the temperature around them is always much higher than the surrounding forest and they themselves are warm to the touch, as if they are generating heat, and this may have led to the lore that beneath one of these mounds is buried a mysterious object with origins lost to time, although there has been speculation that it is an ancient meteorite, a lost tomb, or even a UFO.

Another anomaly that is often mentioned with regard to the mysterious forest is entwined with the myths of the area. It is said that the weather in Pokaini forest is always calm and clear year round, no matter what the conditions of the surrounding region. The lore of this place claims that this was the doing of weather controlling druids, or of the spirits said to reside here, the result of harnessing rituals and powers beyond our comprehension. The druids are often also blamed for the various circles around the forest that seem to remain devoid of any vegetation, and this all just adds further mystery to this strange, enigmatic place. 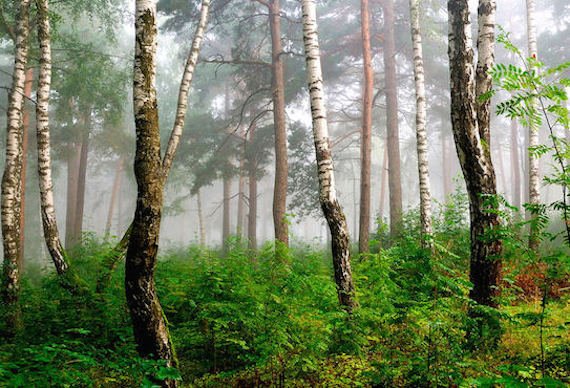 Amazingly, the anomalous forest was allegedly studied by a scientist from Riga by the name of Ivar Viks in 1996. He was apparently drawn to the myriad tales of bizarreness from here, and supposedly witnessed some of these anomalies for himself, claiming that the rocks from the mounds did indeed emit large amounts of electromagnetic energy, and he documented the temperature differences found at the mounds. Sadly, Viks would not long after fall ill with a mysterious sickness and die, although it us unknown if this had anything to do with the work he was doing. The research was then picked up by Russian physicist Yevgeny Sidorov, who also spent some time investigating the forest and its inscrutable rock mounds and speculated that some sort of radiation emanating from underground might be behind many of the phenomena, yet there were no concrete answers to be found as far as I can tell. The main impact the work of these two researchers seems to have been is that it drew greater awareness and attention to this mystical place, and pulled in droves of curiosity seekers.

There are of course plenty of theories as to what is going on in this odd corner of the world, ranging from the rational to the fringe. One is of course that that radiation or some quality of the rocks or minerals in the area might be behind some of the high strangeness. It could also be the result of the geological conditions here somehow combining with the presence of the many geothermal springs underground in the area to form some sort of electromagnetic phenomenon. Others contend that the forest lies along some Earth energy vortex, or that there is a giant crystal buried under the earth here. There are of course UFOlogists who maintain that a crashed spaceship lies buried under the forest, because why not? Then there is the fact that maybe this is all just pure myth and folklore, but in the end no one knows, and Pokaini Forest continues to be one of the more misunderstood and obscure anomalous zones out there, keeping its secrets held close.

The Thylacine: Not Extinct As You Might Think. Maybe…