The Mysterious Little People of the Cherokee

Among the many legends of the proud Cherokee people of North America is the curious tale of a race of little people who were said to inhabit the wilds of North Carolina, Tennessee and Georgia, and who the Natives called the Nunne'hi, meaning “people who live anywhere,” as well as the Yûñwï Tsunsdi’, or “Little People.” In appearance they were said to look just like human beings, only smaller in stature, in some traditions no higher than a man’s knee, and imbued with various powers such as the ability to vanish at will, teleport from place to place, and the ability to live forever. The Nunne'hi were mostly considered to be a jovial race, inclined to dance and sing, and they were also seen as benevolent protectors of the forest and helpers of lost travelers. It was not uncommon for hunters to tell of hearing the drums of Nunne'hi off in the distance, although it was said that to try and track the sound to its source was futile, with the sound always growing farther away.

These mysterious entities were said to remain invisible most of the time, watching humans from afar for the most part, inhabiting the most remote mountain peaks and darkest caves far from human interference, but they were known to appear to the Cherokee during times of need such as war or calamity. Stories abound of the Nunne'hi’s willingness to help their human neighbors in times of need, especially when warfare erupted. They were supposedly fiercely protective of the tribe, and would rally together with forces of invisible warriors to drive away enemies. 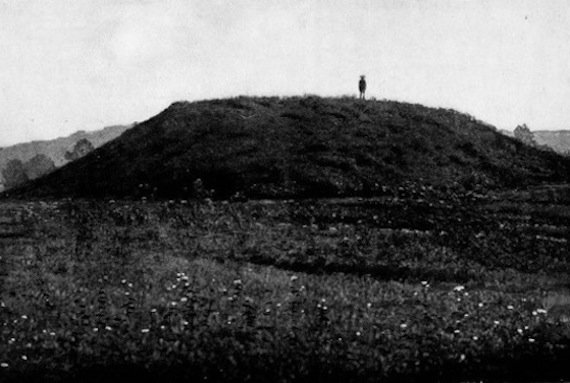 They were said to construct elaborate townhouses underground or within mountains, such as one supposedly lying under Blood Mountain, in Georgia, another near Lake Trahlyta, and another still under Pilot Knob and the Nikwasi mound in North Carolina. Humans who were lost or injured often told of being brought to these subterranean homes to be cared for or nursed back to health by the Nunne'hi, and some Cherokee were said to even go off to live with them permanently. It was said that in order to be accepted one had to fast for seven days, whereupon they would be taken into these lairs to live out the rest of their days. On very rare occasions there were such townhouses found near human settlements, and the American ethnologist James Mooney would write of these in his 1898 Myths Of The Cherokee:

Close to the old trading path from South Carolina up to the Cherokee Nation, somewhere near the head of Tugaloo, there was formerly a noted circular depression about the size of a townhouse, and waist deep. Inside it was always clean as though swept by unknown hands. Passing traders would throw logs and rocks into it, but would always, on their return, find them thrown far out from the hole. The Indians said it was a Nûñnë’hï townhouse, and never liked to go near the place or even to talk about it, until at last some logs thrown in by the traders were allowed to remain there, and then they concluded that the Nûñnë’hï, annoyed by the persecution of the white men, had abandoned their townhouse forever.

A very curious tale of a supposed encounter was also told of by Mooney in his writings. It had supposedly happened to a local man at the town of Nottely when he was a child, and begins with the boy meeting an old stranger out in the forest, who invited him to his home. The boy agreed and found it to be a jovial, happy place full of warmth and laughter, and he ate dinner with the whole family before falling asleep. When he awoke in the morning the man took him out along a path that would lead him home. Mooney says of the rest of the odd tale:

They went down a path that had a cornfield on one side and a peach orchard fenced in on the other, until they came to another trail, and the man said, “Go along this trail across that ridge and you will come to the river road that will bring you straight to your home, and now I’ll go back to the house.” So the man went back to the house and the boy went on along the trail, but when he had gone a little way he looked back, and there was no cornfield or orchard or fence or house; nothing but trees on the mountain side. He thought it very queer, but somehow he was not frightened, and went on until he came to the river trail in sight of his home. There were a great many people standing about talking, and when they saw him they ran toward him shouting, “Here he is! He is not drowned or killed in the mountains!

They told him they had been hunting him ever since yesterday noon, and asked him where he had been. “A man took me over to his house just across the ridge, and I had a fine dinner and a good time with the children,” said the boy, “I thought Udsi’skalä here”–that was the name of the man he had seen at dinner–“would tell you where I was.” But Udsi’skalä said, “I haven’t seen you. I was out all day in my canoe hunting you. It was one of the Nûñnë’hï that made himself look like me.” Then his mother said, “You say you had dinner there?” “Yes, and I had plenty, too,” said the boy; but his mother answered, “There is no house there–only trees and rocks–but we hear a drum sometimes in the big bald above. The people you saw were the Nûñnë’hï.” 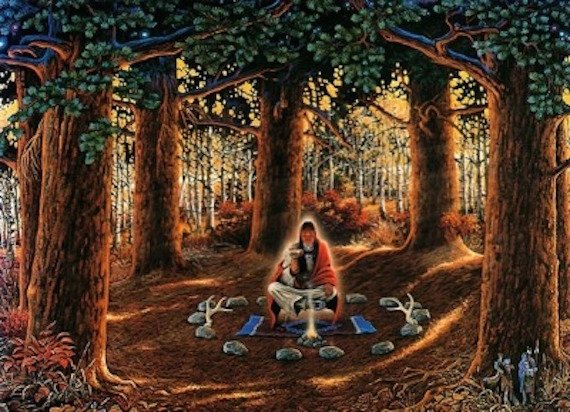 It seems like this must all surely be pure folklore and legend, but there have been some who have suggested that there may be a grain of truth behind these myths. One of these is author and researcher Mary Joyce, who has written of the phenomenon in her book Cherokee Little People Were Real. Joyce claims that she has uncovered evidence that there was indeed a race of tiny humans who could have been behind the tales. Some of this evidence was apparently uncovered by Walter Middleton, who was one of the people behind the construction of the Western Carolina University campus in the 1930s, during which they supposedly made some strange discoveries. Joyce has said of this:

He and a few other men actually worked on the first buildings that were constructed at Western Carolina University, and when they were cutting into the virgin land, they found these little tunnels. They also found a little skull. And, there was a science teacher at the university who kept it on his desk, and he always said it was a child’s skulls. One day, another teacher came by and picked it up and looked at it real close and noticed it had its wisdom teeth. Typically, you don’t get your wisdom teeth until you’re about 18, 19, 20 or 21 so that indicated it was an adult skull, not a child’s skull.

Is there anything to these legends? They say that much folklore is based in some essential grain of truth buried in the past of the people who believe it, so was there really ever perhaps a race of diminutive beings that spurred the stories told amongst the Cherokee? It is unclear whether these rich traditions have any basis in fact at all, but the stories remain, and they make one wonder if there is perhaps more to the history of this land than we have been taught.

More on the Giant Eel Controversy