Is it possible that, against all the odds, the presumed long-extinct pterosaurs of the Jurassic era are still with us? Did they survive extinction in some of the more remote and jungle-based environments? The questions are without doubt inflammatory. The answer to both questions, however, may well be an incredible “Yes!” While reports have surfaced all around the world – and for literally millennia – of large, unidentified winged creatures, there’s no doubt that the most credible and enduring cases come from east of Papua New Guinea, specifically the islands of Rambutyo and Umboi. Locally, the beast is known as the Ropen. Its name translates to “Demon Flyer,” a most apt title indeed.

Unlike the vast pterodactyls of yesteryear, today’s Ropen appears to be a scaled-down equivalent of its ancient ancestor. Its wingspan is often described as being in the region of four to six feet, which is not large for a pterosaur, since they were immense creatures. That does not stop today’s equivalents from being formidable predators, however. By all accounts the Ropen has a mouth filled with vicious-looking fangs, a tail that is reptilian in appearance, and is a beast that can fly at fantastic speeds. Horrifically, it is said to deliberately target funeral processions on the island – due to the fact that its incredible sense of smell attracts it to the odor of decaying, putrid, human flesh. Ropens have also been reported attacking the boats of fishermen at sea, as a means to try and steal their catches of tasty fish. 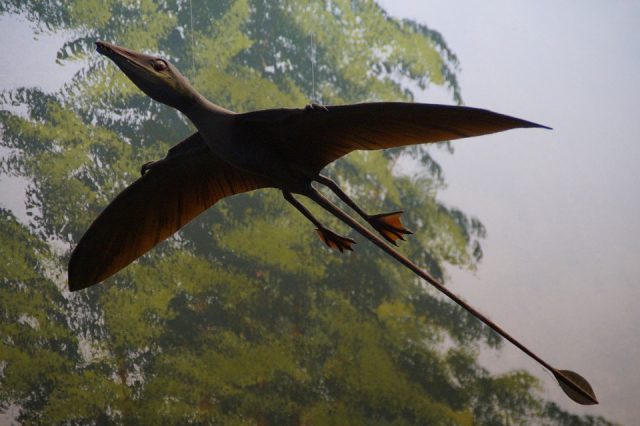 Funerals and fishing-boat activity aside, the Ropen is largely a nocturnal animal, preferring to lurk in its mountainous cave lair during the day and hunt when the sun has set and darkness is upon the land. This is when the monster is at its most dangerous and deadly. The people of Rambuto say that sightings, today, are far less in number than they were in decades past. That they may be on an evolutionary decline is not impossible. Nevertheless, reports still continue to surface. 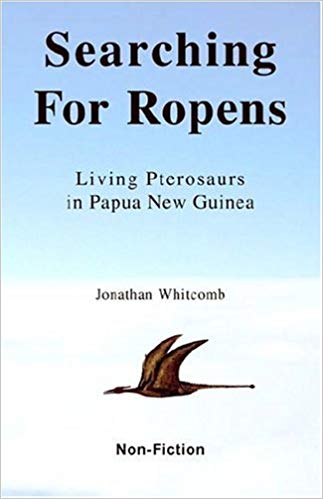 One of the most diligent pursuers of the Ropen is Jonathan Whitcomb, the author of a full-length book on the subject, Searching for Ropens: Living Pterosaurs in Papua New Guinea. Whitcomb has taken the welcome, proactive approach of traveling to the area and speaking with the witnesses directly. That includes Gideon Koro, his brother, Wesley, and a friend of theirs, Mesa. In 1994, they were hiking in the vicinity of Lake Pung – which is known for its volcanic activity – when they saw a huge Ropen, one with a wingspan of around twenty feet, which is far more in accordance with the size of the pterosaurs of tens of millions of years ago. Its tail was long and it had a row of curious, prominent ridges running down the length of its back.

Moving onto mainland New Guinea, such reports surface from their too: unlike the beasts of both Umboi and Rambutyo, the Ropens of New Guinea are almost always of the size reported by the Koro brothers. One of those fortunate enough to see such an immense beast was an American G.I. named Duane Hodgkinson. In 1944, as the Second World War still raged, Hodgkinson was stationed near Finschafen, New Guinea, when he saw something amazing and daunting. He said that, along with a friend in the military, “…we had the opportunity to witness a pterodactyl take off from the ground, and then circle back overhead, giving us a perfect view, which clearly showed the long beak and appendage protruding from the back of its head. It was a big one! I have a Piper aeroplane, which has a wing-spread of twenty-six feet, and it appeared to be about that size. The frequency of its wing flaps was estimated to be about one or two seconds. With each flap we could hear a loud swish, swish and the plants and brush immediately beneath its take off were deflected by the down rush of air.” 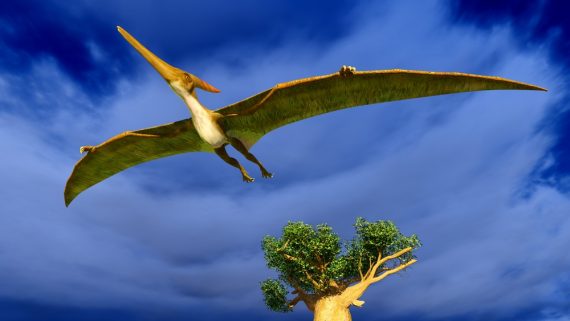 New Guinea: a real-life Jurassic Park? Just maybe, that’s exactly what it is. It’s worth noting that New Guinea is not at all far from Australia. In light of this, we might consider relevant and related the story of a married couple from Perth, Australia who, in December 1997, had an encounter with something that sounded like one of the New Guinea monsters, but on the Perth coastline. The wife, Penny, said:

“Within a minute or so it had reached our position and was about 250 or 300 feet above us and slightly inland. The area was moderately well lit and I saw that it seemed to be a light reddish-tan color. It did not appear to be covered with feathers but had a leathery texture. Soon after it passed us it flew over a more brightly lit area which highlighted even more the leathery appearance also bringing more detail to view. The wings were the most definite leathery feature, they were shaped in a triangular arch, similar to a very elongated shark fin. The body also still appeared leathery, though textured as though possibly covered with fine hair or small scales, the distance preventing any finer observation than that it was slightly different texture than the wings. The shape of the body was a streamlined torpedo shape, slightly broadest at the chest and tapering slightly back to the hip, then tapering more quickly after the hips to a moderately thin tail which was slightly longer than the body.”

Incredibly, the wingspan of the flying monster was in the region of thirty feet.