Call it a mirror universe. Call it a parallel universe. Call it whatever you like but just make sure you call us when you open the door into it so we can see if it’s more like “Star Trek” or “The Twilight Zone.” Well, the scientist who is about to penetrate the wall between our universe and the next one has she phone close by as she begins her attempt to send a beam of subatomic particles down a 50-foot corridor, past a giant magnet and through a solid wall where they will enter a mirror universe and kick their mirror-image counterparts out of it onto the other side of the wall where their 15 minutes of fame and a phone call to you await. It may not be sci-fi show worthy, but it would still be a first. Will it happen? Where’s your phone?

“This is a pretty straightforward experiment that we cobbled together with parts we found lying around, using equipment and resources we already had available at Oak Ridge.”

Physicist Leah Broussard modestly explained in a recent interview with NBC News the beginnings of this historic experiment. It actually goes back to the 1990s (like most of the movies this summer – we’re looking at you, Toy Story 4) when scientists discovered that identical neutrons break down (decay) into protons at slightly different rates depending on whether they do it naturally or in a particle beam. This mere 10-second difference, replicated reliably and independently by many groups, baffled scientists looking for a cause. One theory was that some neutrons disappear into a ‘mirror universe’ as they break down. A very cool theory, but how do you prove it?

Enter Broussard, who conveniently works at the Oak Ridge National Laboratory in Tennessee and has an 85-megawatt nuclear reactor called the Spallation Neutron Source that can create beams containing billions of neutrons on demand and that she apparently has the proper authority and experience to play with. The neutron expert has set up a wall with magnets on either side to oscillate the neutrons in the beam aimed at it. Theoretically, the oscillation may shake the neutrons into the mirror universe, allowing them to pass through the wall to the other side and then back into our universe where theoretically an evil Spock will be detected. 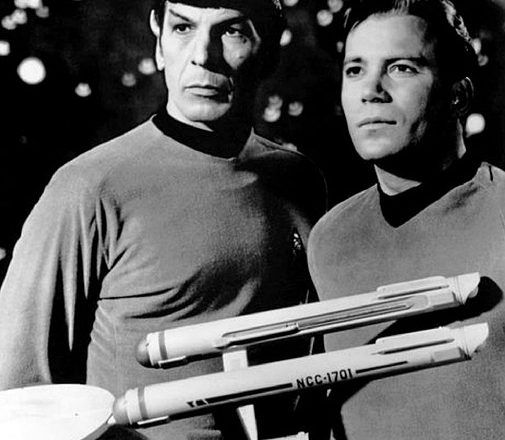 “If you discover something new like that, the game totally changes.”

No, nothing THAT game-changing. Broussard is hoping (and ready for the answer to be ‘nothing’) that their mirror images (and only those neutrons) will be detected on the other side. Yes, it really would be game-changing.

“If some of them show up anyway, that would suggest that conventional physics is wrong, and the mirror world is real.”

A mirror world with its own laws of physics and history and alternate or mirror images of everything in our universe … including us. When will the world as we know it end? Broussard says the one-day experiment will take place soon and the analysis of the data will commence immediately and take a few weeks. That means we’ll have the answer before the end of the summer blockbuster season and in time to rewrite the plot of a few sci-fi movies to reflect what an actual mirror universe really looks like.

Are you ready to meet your mirror self? You may want to put on a nicer outfit.

The Strange Desert Anomaly of Africa