A Tour of Haunted Bermuda

The British Overseas Territory of Bermuda, in the North Atlantic Ocean, is mostly known for its sun, azure waters, and pink sand beaches, a paradise for tourists looking to get away from it all. Yet beneath the sun and fun there is a dark layer to this place, and it is steeped in the paranormal. Most people will probably immediately have the notorious Bermuda Triangle come to mind, that mysterious zone of disappearances and UFOs that the island forms part of. However, what many people might not know is that this is only part of the island’s legacy in the paranormal, and it has a rich history and lore of various hauntings all condensed within its rather small area. Indeed, considering Bermuda is only about 21 square miles in area, it could almost be considered one of the most intensely haunted places on earth.

One of the more frightening and persistent of Bermuda’s many hauntings is an old estate commonly simply called “Winton,” on the North Shore, said to be haunted by the spirit of a woman colorfully named Kitty Love Dill, who was the wife of a Captain Thomas Dill. The couple lived at the historical house over two hundred years ago, and by all accounts it seems that Kitty has never really left. The shadowy, misty shape of a woman is often seen roaming around the premises, often tapping people on the shoulder or rather alarmingly appearing over their beds as they sleep. Footsteps will supposedly follow people around, and the ghost in the house allegedly has the rather unsettling habit of answering the phone as well, with some callers complaining that someone on the other end will pick up but refuse to say anything, before hanging up. The haunting is supposedly so intense that many who have lived there have supposedly suffered nervous breakdowns, and according to The Bermudian, one Mrs. “Mac” Musson, who lived at the house for a mere 11 months in 1964, has said of her family’s time there:

We just couldn’t get any sleep at night. Even after the first week I began to notice something, thought I didn’t believe in ghosts when I first moved in. There were sudden temperature drops in the house–even in the dining room–which couldn’t be explained away as drafts. 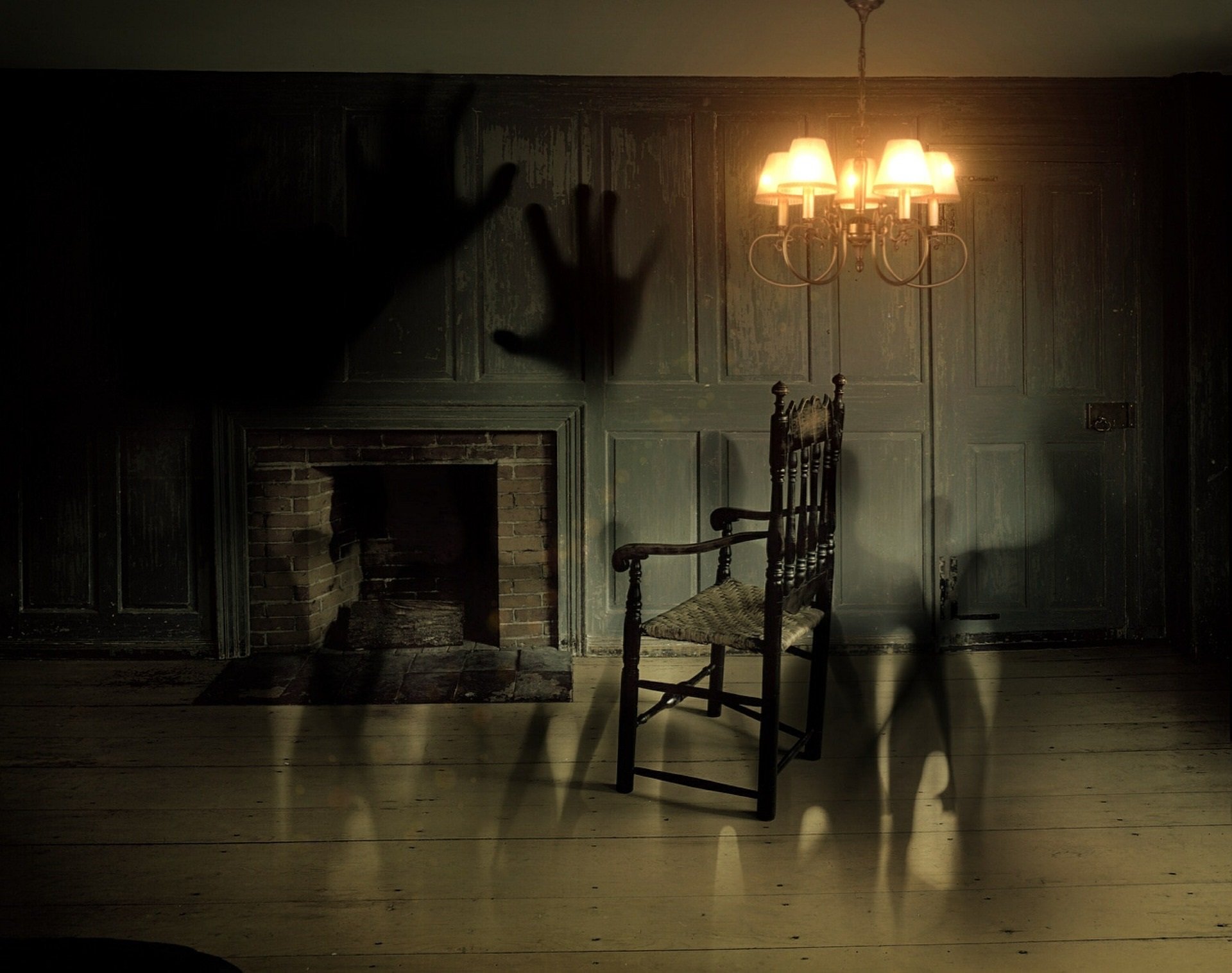 Musson also claimed that her son and daughter had on several occasions been awoken at night to see the spectral face of a woman staring at them, and that orbs of light were frequently seen floating up and down the stairs. Objects also would often go missing and on one occasion some unseen force had reversed the overlapping doors of the hallway closet. It all seems very spooky indeed, but Bermuda apparently has tons of houses like this, with practically every house here more than a century old having ghosts or paranormal activity of one form or another.

One of the more famous haunted houses in Bermuda is the 200-year-old house owned by the Cox family and originally established by a John Cox. Called the Orange Valley Road house, it is now a quaint estate surrounded by 15 acres of sprawling serene orange orchards and woodland that would not look out of place in a travel brochure, and it apparently once had a vast flower garden that a previous owner, Laura Cox, who died in 1861, had spent every waking moment in tending to it. According to the lore, Laura Cox is still around, and none too happy about the disappearance of her beloved garden, supposedly known to appear in front of startled guests to angrily point to where the garden used to be. Laura will apparently also throw tantrums and go stomping through the house slamming doors shut. Seems like someone should probably put that garden back.

In the same general area is the creepy home once called “Somersalls,” located at a place called Orange Grove. This house is notable for its rather tragic history. In the 1680’s, the original residents, a William Manigan and his family, had a Native American slave named John. After years of horrific abuse, John one day allegedly decided that he had had enough, and his mind went to truly dark thoughts. After stealing a pistol from his overbearing master, John then apparently set the house on fire and waited outside to shoot all those who tried to flee. He was captured for his crimes and sentenced to be hung, drawn and quartered. To this day the spirit of “Indian John” is said to roam the grounds, often reported as uttering Native American chants and even described as still grasping a pistol. 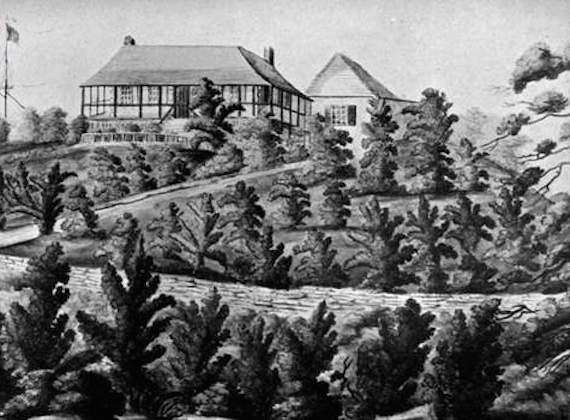 Another house whose haunted history is entwined with this past of slavery is the house called “Bel-Air,” at a place called on Cobbs Hill. Among the various typical paranormal activity here such as strange noises, flickering lights, and disembodied voices, this particular site is known for is supposed menacing, at times even oppressive air of hostility that seems to pervade the very fiber of its being, driving some to even flee the premises in a full blown panic from some unseen force without really knowing quite why. After years of this phenomenon, in 1958 the location was visited by the Helen Hayes Repertory Theatre, and so unsettled were they by this atmosphere of inexplicable gloom and palpable animosity that they purportedly arranged for a Ouija Board session to see what was going on.

It is alleged that through the Ouija board they were able to make contact with the spirit of an 18th century female slave who had once toiled away here at the estate, and when asked why the house was so permeated by this aura of dread the spirit had quite the story to tell. She purportedly told them that another slave had once been severely tortured here after stealing some jewelry, and that as punishment he had vehemently vowed that the house would be forever cursed. It was also revealed that one of the forms of torture this slave had endured was having his hand hideously burned in a kiln, which the spirit gave directions to. When the group went to look, there was nothing but grass, however, when they dug into the ground it was found that an old kiln was there precisely where the ghost had said it would be. Weirdly the aura of evil was particularly strong around this spot. After this contact with the slave’s spirit would be lost.

On the shores of a place called Granaway Deep is also the haunted house called “Spithead,” once the home of the notorious pirate Hezekiah Frith, and where according to lore killed a beautiful young maiden in the carriage house nearby. Both ghosts are said to still wander about here, and playwright Noel Coward, who lived here in 1956, claimed to have seen the spirits on numerous occasions. Another pirate ghost is that of George Dew, whose home was what is now called the Old Rectory B&B, in St. George’s Parish, where he lived in the late 1690s after giving up his privateering ways. In modern times he is said to still hang around, playing a harpsicord whose disembodied music can often be heard.

Other haunted places abound in Bermuda. The old Fort St. Catherine, built in 1614, has a ghost called simply George, who is rather boisterous and aggressive, pestering and harassing people to the point that there was even an exorcism performed in the 1970s in an ultimately failed bid to get rid of him. There are even haunted beaches here, such as a pink sand beach on the western side of the island supposedly prowled by the ghost of hotelier Hugh Gray, who was found mysteriously dead at the bottom of the stairs of his beach house in the 1920s. You can also supposedly see spectral pirates lurking about the beaches of the Grape Bay area, which was once used as a treasure stash and burial ground for murders, and which is considered one of the intensely haunted places on the entire island.

Here have been only a few of the numerous ghosts and hauntings that supposedly exist here in this postcard-picture perfect paradise. With Bermuda's long, often violent history it is not hard to imagine, yet stories of spirits and ghouls clash so loudly with its bright, colorful and sunny image as a tourist haven that it seems to be an aspect of the island that most are not aware of. But make no mistake, this is a very haunted place, full of historical sites prowled by ghosts and spooky lore, so if you are ever on a vacation in the area, make sure to take some time out of your day at the beach to go check some of these places out for something a little off the beaten path.