A Tragic Tale and a Haunted Castle in Italy

Perched upon a towering sheer cliff overlooking the quaint, picturesque rural village of Borgo Montebello, in Poggio Torriana, Italy, and surrounded by panoramas of breathtaking natural beauty is the majestic and historical Castle of Montebello. Once the fortress of the eminent noble Guidi di Bagno family, as well as the Malatestas and the Montefeltros families, the castle dates back into the 1300s, and was once a fearsome site, equipped with sharpened spikes on its walls and considered to be nearly impervious to enemy attack. Looking over the village like a watchful guardian of epic lore it was a fortified, unconquerable force of nature that housed some of the greatest dynasties of its day. It is known for its great beauty and its “Renaissance wing,” built by the Malatestas in 1400 and holding within it a priceless collection of artwork, furniture, and crafts, and it is also just so happens to be considered one of the most haunted castles in Italy.

The haunting has its roots in the tragic tale of a girl named Guendalina Malatesta, more commonly known as Azzurrina, born in 1370 and the daughter of Ugolinuccio Malatesta, the feudal lord of Montebello at the time. Guendalina had the unfortunate circumstances of having been born an albino, and her pale blue eyes, light hair, and alabaster skin contrasted starkly with the other residents of the village, to the point that there were frightened whispers among locals that she was actually a witch. Her mother took to dying her hair in order for her to blend in more easily, but the vegetable dyes ended up tinting her hair blue, which in fact led to her nickname "Azzurrina." Due to the rumors and her striking, otherworldly appearance, it is said that she was confined to the castle or its courtyard and escorted by two armed guards at all times to protect her from those who would harm her, and it was mostly a lonely life for the girl despite her family’s great wealth and power.

According to the tale, on the summer solstice, June 21, 1375, Azzurrina had wanted to play outside with a cloth ball but the weather had turned ominous and stormy, and so she had decided to play inside instead. As always she was shadowed by her two hulking, armored bodyguards. It was the same beat as usual for them, one would imagine quite boring as they were in the safety of the castle and beyond any real threat, despite the fact the the lord was off to battle, and as the little girl played with her ball their minds turned to other things. It seems they weren’t paying close enough attention when Azzurrina’s ball bounced away down a corridor and she followed it to watch it go rolling into a secret tunnel passage beyond a slightly ajar trapdoor that led off into the unknown gloom beneath the stone floor.

The story goes that the two guards were snapped out of their daydreaming by a sharp scream, after which they ran to find no sign of either Azzurrina or her ball. An extensive search for her was mounted, scouring every inch of the castle and its grounds, but not a trace was ever found of her, as if the castle had just swallowed her up. In the years after there was much rumor as to what had happened to the girl, such as that her father had had her murdered because of her appearance in order to keep up his respect in the community, or that Azzurrina surely was a witch as they had thought, and had made herself disappear, but there was never any evidence for any one idea, and she was never found. However, according to many accounts the girl never really truly left at all.

Five years after that, on June 21, the summer solstice, through the castle halls reverberated a disembodied series of screams, the source of which could not be identified, but which sounded like that of a little girl, who residents fearfully knew must be the long lost Azzurrina. Five years after that it happened again, and then again five years later, until the mysterious, haunting scream of Azzurrina’s ghost became a part of the castle itself, always happening on the same day every five years on the summer solstice, sometimes a scream, sometimes crying or laughter, but always very eerie. This apparently would happen for centuries, but the outside world had little knowledge of the phenomenon until the castle, which today is known as the Rocca dei Guidi di Bagno, was restored and turned into a museum in 1990 and guests began hearing the same thing. 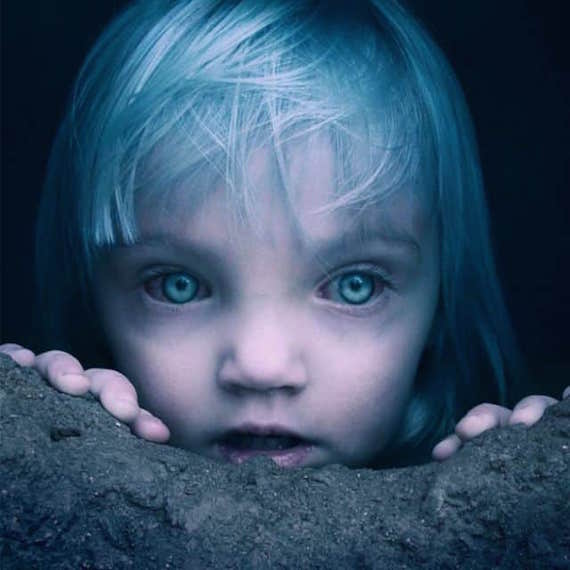 It was not long before word got out into the wild and curiosity seekers started coming here not only to admire the architectural beauty and splendor of the charming countryside surrounding this little village, but also to hear or possibly see the enigmatic ghost of Azzurrina lurking within its walls and passageways. Not far behind were paranormal researchers, who have frequently managed to record the anomalous sounds, although these recordings have turned out to be inconclusive. The story of Azzurrina has since been made into an Italian horror movie by Giacomo Franciosa, and it has even accrued a reputation for cursing the production on location, causing the director to come down with a mysterious illness and a freak accident concerning an actor in the film.

Is this real or just a spooky tale spun around this castle wrapped in such a dark history of death and conflict? It is rather unfortunate that the story of Azzurrina was mostly passed down through oral traditions for centuries before finally being recorded by a parish priest in the 1600s, leaving us to wonder how much of it has been warped and twisted through retellings and how much of it is even real at all. Nevertheless, it has rooted itself into the local lore of this place, and attracted the attention of a fair number of visitors and curiosity seekers looking to see this ghostly girl who has dwelt here in these cold stone walls for centuries, perhaps eternally tethered to the place where she met her end.