Area 51, America’s Most Secretive Government Installation, Was Never All That Secret

The name is almost synonymous with American black projects and secrecy, and there is perhaps no other government installation or operation that has aroused more interest over the years.

In fact, if just one term could be associated with all the claims of exotic looking, experimental U.S. test aircraft from over the years--as well as the possibility of a few "crash retrievals" that may represent technology that was never ours to begin with--there is one obvious name stands out among the rest.

Few places are associated with more rumors and secrecy than America's famous Area 51. Prior to the administration of President Barack Obama, no sitting U.S. commander in chief had ever said its name publicly; this was primarily because the test site remained officially off-the-books until 2013, when the CIA declassified historical documents about the U-2 and Oxcart spy plane programs, which were developed there.

However, what many aren't aware of when it comes to Area 51 is just how much information about the "secret" installation had already been made public prior to that time. In fact, some would have argued that Area 51--widely considered one of the most secretive facilities in all of American government--had never really been all that secret.

The history of the site is well known today. With the end of World War II and the emergence of the new world superpowers, the United States knew it had to have advance knowledge of any weapons and technological advancements being developed in the Soviet Union. Arguably, the best way to achieve that would be to use sophisticated aerial photography to help visualize what was happening behind the Iron Curtain; this would obviously require new kinds of aircraft capable of such missions.

Officials with the U-2 spy plane's Development Projects Staff began to look for an area within the United States where such aircraft could be developed and tested safely, and away from the public. According to the CIA's history of the site's discovery, it was during a flight over Nevada in the early 1950s that officials spotted "what appeared to be an airstrip by a salt flat – Groom Lake – near the northeast corner of the Atomic Energy Commission’s (AEC) Nevada Proving Ground, which had been used during World War II as an aerial gunnery range for Army pilots."

It seemed like the most logical place for spy plane tests to be carried out, although there were a few issues. As a CIA.gov article on tests at the site discusses, "upon further discovery, the U-2 Project Staff learned Groom Lake was not actually part of the AEC proving ground. They asked the AEC to add the Groom Lake strip to its real estate holdings in Nevada, to which the AEC readily agreed, and the deal was approved by President Eisenhower."

For years thereafter, portions of the highly clandestine U-2 aircraft were developed out at nearby Barstow, California, draped in sheets, and then flown in transport aircraft out to the Groom Lake facility for final assembly there. Pilots were brought in (they were referred to as "drivers", since the operation was being carried out by the CIA, rather than the Air Force), and training aimed at getting personnel up to speed on the specifics of flying these large, and potentially fragile spy planes began.

According to the CIA, the famous name "Area 51" was simply what the location's map designation had been at that time (author Annie Jacobsen, who wrote an uncensored history of the location in 2011, also notes that the "51" was a reference to the year the site was established). Since "Area 51" left a bit to the imaginations of those prospective employees who might come and work there, nicknames like “Paradise Ranch" became common, as well as "Watertown," in reference to the rainwater runoff that would periodically spill off the surrounding mountains and fill the otherwise dry bed of Groom Lake.

Although it is without question that Area 51 and the projects carried out there over the years have been done so with a degree of secrecy, the idea that Area 51 had been largely undisclosed until 2013 isn't entirely true. In fact, a review of early documentation from around the time of its founding shows that the site, and its various nicknames, were pretty common knowledge.

"The 'base that doesn't exist' has always been public knowledge," argues Peter Merlin, an aerospace writer and historian. "Construction of the airfield at Groom Lake, Nevada was announced by the government, and its existence has been repeatedly acknowledged by official sources." Merlin has argued in the past that a number of unclassified maps produced over the years displayed the "secret" location, but that "Test Site insiders, government officials, military personnel, and the general public have, however, unknowingly conspired to perpetuate the myth that the existence of the base is a closely guarded secret."

Perhaps the earliest public mention of Area 51 appeared in a press release on May 18, 1955, penned by Seth Woodruff Jr., who was at that time Manager of the Atomic Energy Commission's Las Vegas Field Office. Woodruff wrote about the personnel from the Reynolds Electrical and Engineering Company being brought in "to begin preliminary work on a small, satellite Nevada Test Site installation." Runways and a few buildings were planned for the site, which Woodruff said would be "essentially temporary."

Although the name "Area 51" was never used in the press release, it is obvious in hindsight what Woodruff was referring to. The newly announced project was referenced again in an article in 1955 that appeared in the Las Vegas Review-Journal:

"Construction at the Nevada Test Site installation a few miles north of Yucca Flat which was announced last spring is continuing. Data secured to date has indicated a need for limited additional facilities and modifications of the existing installation. The additional work which will not be completed until sometime in 1956 is being done by the Reynolds Electrical and Engineering Company, Incorporated, under the direction of the Atomic Energy Commission's Las Vegas branch office."

During this period, the site was more commonly referred to by its "Watertown" moniker, although this wasn't always the case. As Peter Merlin notes, a January 1960 edition of the N.T.S. Bulletin ("N.T.S." referencing the Nevada Test Site) published a series of new telephone numbers for the installation on its front page, under the inconspicuous heading, "Area 51 Telephone Numbers" (see below). It doesn't get much more obvious than that, especially considering that the N.T.S. Bulletin was an unclassified publication. 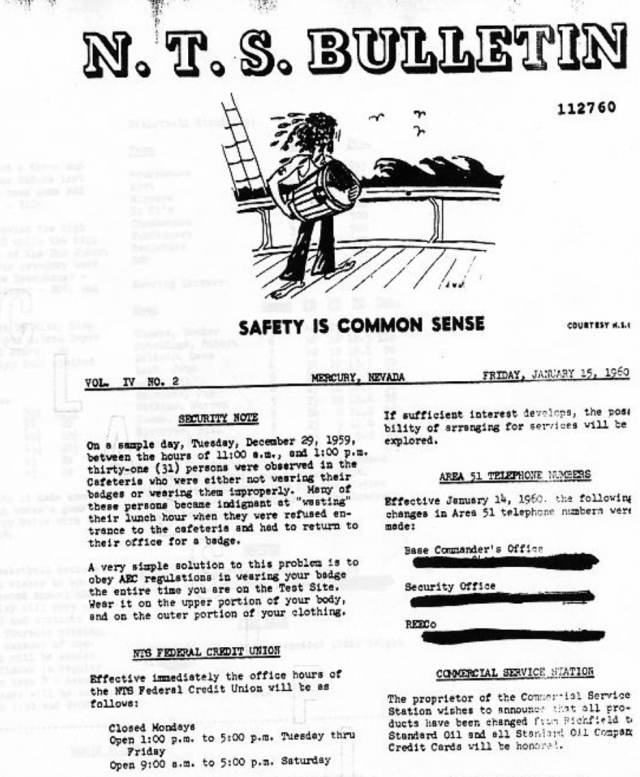 Other names for the site came into use over the years, which included Dreamland (the radio call sign for the base), although today, the name that is most often employed for official use is the Nevada Test and Training Range at Groom Lake. In the past, Area 51 and Watertown were both used as official names for the site, and according to T.D. Barnes, a former employee of the site and president of a similar collection of past employees called Roadrunners International, Area 51 can be found on some official maps and documentation produced by the Nevada Test Site, the Department of Energy, and other agencies. In fact, Watertown is even included on a list of legal members of the Alamo Township in Lincoln County, Nevada.

While nobody would dispute the use of secrecy in keeping Area 51 and the operations carried out there over the years away from prying eyes (and enemy spies), to say that the installation had been treated as though it "didn't exist" until its disclosure in 2013 is a bit of a stretch. In fact, the passing references to it at that time, in relation to the CIA's historical account of the development of the U2 and Oxcart, is probably best explained by the simple fact that Area 51 didn't need to be "disclosed" to the public: it had already been well known by its various names, and referenced many times in print over the decades.

The Horror That Came To Matawan Creek