Situated in the rural wilds of Larne, Northern Ireland, is a peaceful little tract of idyllic woodland called Ballyboley Forest. Although the forest as we see it today was largely planted in 1957, this place has a history much more ancient than that, and beneath the placid, quiet veneer and overlaying the forest that existed here before is a roiling darkness and tales of druids, ghosts, strange monsters, and magic. Indeed, the quaint Ballyboley Forest has steadily over the centuries accrued a grim reputation as a very haunted, even cursed place, full of ghosts, monsters, and more.

The area has been known as a malevolent locale for centuries, and was long avoided by travelers. It is said that during the 15th through 17th centuries this was a place where countless souls entered, only to vanish and never leave, disappearing without a trace. The Celtic traditions of the region painted the woods as a place of spirits and the mysterious Druids, who were said to worship elementals and old pagan gods, and who carried out strange, arcane rituals in the gloom, often supposedly making sacrifices both human and animal at enigmatic stone altars interspersed between the twisted trees. There are also old Celtic tales that tell of the Druids using the area to open up actual gateways to other worlds. Indeed, there have been found unexplained stone altars, circular trenches, and other ancient ruins within the forest, although their purposes and whether these were built by the Druids are unclear.

The stories of Druids lurking within the Ballyboley Forest have continued right on up into modern times, with frequent reports of encounters with four ghostly robed figures believed to be the ghosts of the Druids of the past. These figures always have faces covered by their hoods, and are seen to watch visitors only to vanish into thin air. At times they are said to carry with them spectral burning torches and to circle around campsites at night, evaporating into the ether just as suddenly as they came. On occasion stone altars can be seen with smoke rising from them but no fire, the area penetrated by the screams of long dead human and animal victims, often said to sound reminiscent of an “abattoir.”

One modern account of these mysterious figures is on the site UK Wild Man, where the witness explains that he had been out on a camping and mountaineering trip in 2005 with a group of fellow high school students. They were there on a church-sponsored field trip, where they would hike and camp for a few days. One night they spent camping out in Ballyboley Forest, and there were several other groups at campsites nearby. At some point during the evening some very weird events allegedly began to play out when some other campers began shouting out that there were some dark figures moving about at the end of a nearby firebreak, which is a long tract of treeless land for the purpose of slowing down forest fires. Some of them went to investigate, thinking it might be someone lost, but there turned out to be no sign of anyone there at all. Things would get odder still when they returned to camp and tried to put it all out of their minds, which wouldn't end up working out. The witness says:

We were all gathered round a gas stove having hot chocolate, when someone else noticed some kind of movement down at the far end of the fire break. This time, the figures that had been previously sighted were holding some kind of torches- but this is where it got a bit stranger. Rather than modern torches or Maglites, the figures seemed to be holding what were either branches that had been set on fire, or some kind of oil-lanterns that you held out in front of you.

We counted 4 of these figures (this is important to remember). Someone later that night (who lived on a farm and would therefore know a bit about this) claimed that, after the figures vanished, they could hear sounds like an abbatoir in the distance- echoing cries and squeals of animals. Needless to say, after the figures vanished, our young imaginations ran wild and we began to assume the worst was about to happen. In a small and very religious country like Northern Ireland, you are brought up hearing of stories of the witchcraft and devil-worship that supposedly takes place in secluded forests- and it took a lot of discussion and freaking out before we decided that someone should ring the nearest teacher with our group’s emergency mobile phone.

But eventually, more rational voices began to pipe up and assure the more frantic campers that it was probably just other groups in the forest (the fire-break stretched very far back- about a kilometer), and we decided the best course of action was for everyone to go to their tents, keep torches handy and stick together. The next morning, save for a few rumors of figures and lights being seen running around the tents, we laughed it off and carried on with the expedition. 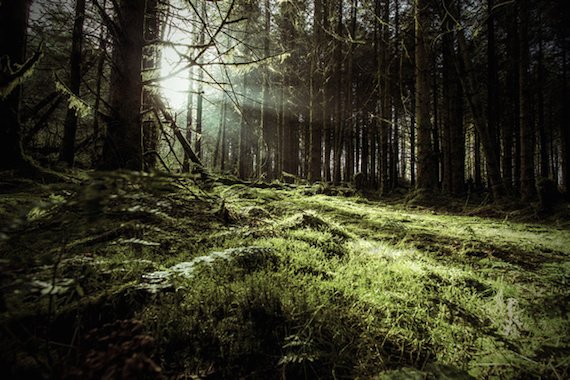 A similar report comes from 1997, when two witnesses claimed to have been walking in the forest when they had heard a “flapping sound,” which they tried to ignore as just a trick of the wind. As they continued through the trees they claimed that they were soon assailed by the sounds of what sounded like a woman screaming and moaning in agony. This seemed to get louder as the increasingly panicked men picked up their pace through the woods, and they then purportedly found themselves coming upon a tree that looked to be covered with blood, seemingly fresh and just smeared all over the bark, yet there was no sign of anyone else out there and the screaming had stopped to leave silence crashing down upon them. The grisly sight of all of that blood sent the men scrambling to get out of there, and as they did they claim that they had seen four figures dressed in ragged brown hooded cloaks standing at the tree line watching them.

Perhaps tied to these ghostly phenomena are various other oddities that campers and hikers have reported in the area. The overwhelming sense of being watched is very common, as are sudden bouts of panic or disorientation, often accompanied by myriad physical symptoms such as headaches, nosebleeds, nausea, dizziness, or fainting. These episodes are sometimes reported together with instances of missing time, or of the witnesses suddenly finding themselves in a different part of the forest for no discernible reason. The forest also reportedly has zones where one can enter and find all sounds of the forest to cease completely, leaving nothing but a blanket of utter, unbroken silence, and there are areas that will exhibit sudden massive fluctuations of temperature. What is going on here? Why should this place hold such power? 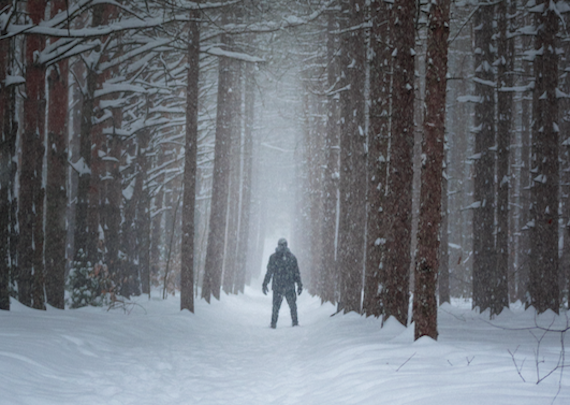 Besides strange phenomena and robed ghosts, there have also been very bizarre reports of creatures in the forest that can only be described as something very much like Bigfoot in nature. Despite what you may think, large hairy hominids have been sighted all over the world, and the UK is actually no different, with an absurd amount of reports of such creatures, including even Northern Ireland and Ballyboley Forest. The Irish version of the Bigfoot is commonly known as the gruagach, meaning “hairy one,” and it has been seen all over Northern Ireland over the centuries, working its way into the regional lore in the process. There have been occasional sightings right into modern times of what is described as an immense, ape-like humanoid in Balleyboley Forest, including campers reporting the sounds of howls from the beasts and even “wood knocking," a behavior known in the North American Sasquatch wherein the creatures apparently bang on trees or logs to make intimidating noises.

One reports of a Bigfoot-like creature in the forest comes to us from the site CryptozoologyNews, and supposedly happened in 1998. The witness, a Caroline Breen, says she was walking some dogs up at the Ballyboley Forest with her husband when they came upon a patch of dead trees and spied something big crouching behind it. Her husband stepped closer to take a look, and the witness says of the whole scene:

We thought at first it was a human, but as it raised its head in the air, we saw it. The dogs got agitated. I told him to step back. He thought it was a chimpanzee or something. He got closer, to within 15 feet or so, and it was then that it reared up on its legs. It was very tall and it was carrying a big stick. It ran so fast through those trees, like it had done so a thousand times. I don’t know if this was a Bigfoot but my husband didn’t think we got these types of things in Ireland.

The beast was described as having a face like a chimpanzee, covered in dark brown fur, and as standing around 8 feet in height. If this were some sort of hairy ape-man, like reported in other areas of Northern Ireland and the British Isles, then what could it be? It seems rather ridiculous to think that some immense, hairy proto-human could be roaming the wilds of Britain, yet the stories continue to come in, and one is inclined to wonder whether this is anything really biological in nature at all, but rather something inter-dimensional, seeping through the folds between worlds, or something more spiritual or ghostly.

The Ballyboley Forest has some things in common with other far-flung cursed forests of the world, in that we have an ecelectic mix of various very odd phenomena that for whatever reasons have managed to congregate here at this one spot. Why should this be? Is there some immeasurable quality to this ancient forest that draws to it these forces? Are there energy lines or some power that tethers these things to it? Of course, as with other regions of the world with similar phenomena there is the idea that this could be the result of overactive imaginations, or possibly some natural phenomenon such as ultra low frequency sounds, also known as infrasound, which can result in a lot of disorientation and hallucinations. In the end we are left with a place that has managed to accrue various tales of the bizarre over the centuries, and perhaps the only way to really know what is going on is to go experience it for yourself. It is another quaint, creepy forest holding mysteries that will probably live on, no matter what the answers may be.