Giant Mysterious Creature Recorded in Lake Michigan During a Storm

When it comes to compiling lists of monsters residing in the five Great Lakes, fans of Lake Michigan usually respond with some comment about the great fishing (which it has) or change the subject to the Michigan Dogman. That’s because Lake Michigan has no famous monsters, just a few rumors. It’s so bad, even the 2018 “Lake Michigan Monster” film is more comedy than horror. All of this may change soon with an eerie (not Erie) video from a closed-circuit camera on a Lake Michigan pier showing what looks like a giant sea monster or serpent trapped near a lighthouse during a severe storm before finally freeing itself and swimming off. A real Lake Michigan monster? Aquatic Dogman? The world’s largest blob of seaweed?

“The "Lake Ness" monster being washed over the south pier during the gale on 6-13-2019 lol. But really, what the heck is it? Apologies on quality - taken from downtown with live web camera in 40 mph wind. Credit: WWMT and Horizon Broadband livestream service.”

Michigan resident Tim Wenzel posted the video on his Facebook page, hoping for help in identifying what he called the “Lake Ness” monster. For a perspective on its size, the lighthouse in the video is Charlevoix's South Pier Lighthouse – a lighted landmark for Lake Michigan boats looking for the channel to Round Lake and Lake Charlevoix. The first wooden lighthouse was built there in 1885 and the current steel structure was built in 1948 and is 41 feet (12.5 meters) high. Wenzel was apparently watching the live video stream provided by the WWMT and Horizon Broadband livestream service on June 13 because he’s a self-described “storm geek” and “small sailboat skipper.”

After posting the video on Facebook, Wenzel received a number of serious and nonsensical suggestions as to what the “monster” might be. He agrees with many who thought it was a giant lake sturgeon, which can weigh up to 200 pounds and reach a length of seven feet. While sturgeons are known to be flexible, the ‘creature’ in the video seems to be pretty bendable and far longer than seven feet. That leads some, including Dr. Pete VanVranken of the Dickman Road Veterinary Clinic in Battle Creek interviewed by Kalamazoo radio station K102.5, to suggest it was a giant eel, especially after seeing it seemingly slither through the barrier and appear to dive after reaching the other side. There are many species of eels and lampreys, both native and invasive, living in Lake Michigan. However, even the sea lamprey only reaches 4 feet (1.2 meters) in length and the thing in the video appears larger. 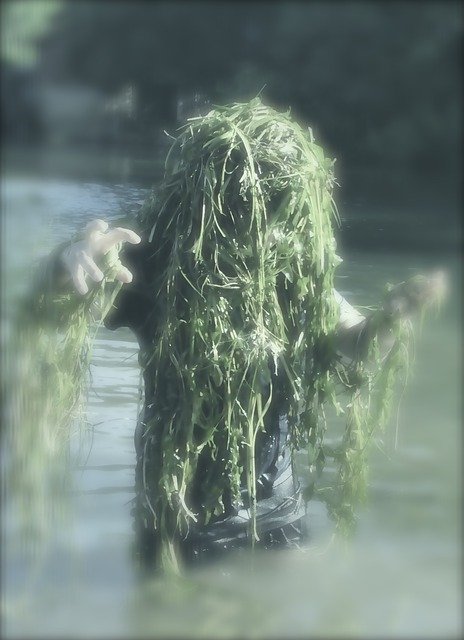 So, what is that thing in Tim Wenzel’s video? A mutant lamprey or sturgeon? An unidentifiable blob of seaweed or trash? Something else? Something worse?

Something at least worthy of the name Lake Michigan Monster and a better movie?

The Mystery of Louisiana’s Grunch Monster