What does it mean to be a tree? It might seem like a silly question, but a mysterious phenomenon that allows the stumps of some trees to thrive--even in the absence of any new growth--is challenging our ideas about how communities of plants live and interact with each other.

By definition, trees are perennial plant organisms, meaning that they renew their growth over time. Consisting of a tall trunk from which numerous secondary stems, or "branches" protrude, each branch possesses a number of leaves that provide food for the plant by collecting energy from sunlight and carbon dioxide, which, combined with water absorbed through the roots of the tree, produces sugars in the form of glucose.

These processes are well understood, which is why it might seem odd to ask a question like "what it means to be a tree." However, a recent study by a team of researchers in New Zealand has observed a tree stump that remains alive, despite having none of the ordinary facilities required for sustaining itself: effectively making it a "zombie" tree, in a sense. 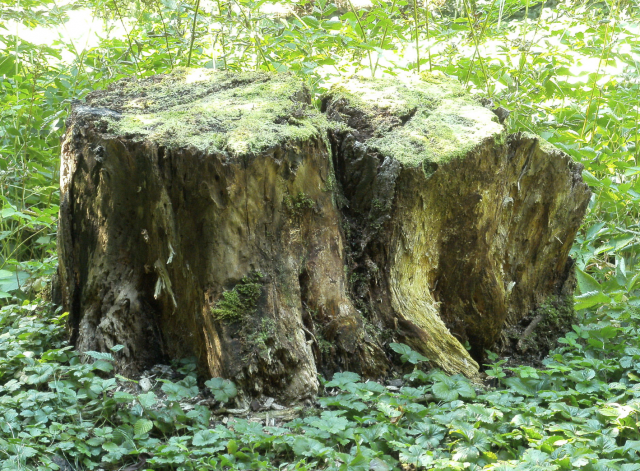 This unique plant is able to survive sans leaves in a photosynthetically inactive state with a little help from its friends nearby: that is, it is engaged in exchanges of water, minerals, carbon, and even microorganisms necessary to survive with other plants. In this "community" root system (something known to botanists as conspecifics), even a tree without leaves can thrive.

The arrangement, rather than being likened to a "zombie" tree, might be more closely likened to a natural, botanical form of "life support" for the plant in question.

The tree stump in question "displayed greatly reduced, inverted daily sap flow patterns compared with intact kauri trees," as stated in the paper's abstract. Despite being a trunkless tree, the first clue as to its unconventional survival had been sap flow variations in the kauri stump, which seemed to mirror those of its surrounding neighbors.

The researchers found that rainfall and other sources of water introduced to the surrounding trees "were very rapidly and inversely mirrored in the living stump's water status."

"Such intimate hydrological coupling suggests a 'communal physiology' among (conspecific) trees with far-reaching implications for our understanding of forest functioning, particularly under water shortage," the authors wrote.

These "living stumps," as they are appropriately called, aren't a new phenomenon. The earliest record of a living stump dates back to the 1830s, although science articles didn't begin to regularly appear on the subject until 1959, with the publication of

F.H. Bormann and B.F. Graham Jr.'s "The occurrence of natural root grafting in eastern white pine (Pinus strobus L.), and its ecological implications". The article appeared in the journal Ecology, and several other articles that examined the phenomenon of "living stumps" were published in the years that followed.

The new paper, titled "Hydraulic Coupling of a Leafless Kauri Tree Remnant to Conspecific Hosts," was co-authored by M.K.-F. Bader and S. Leuzinger of the Institute for Applied Ecology New Zealand at Auckland University of Technology. The study can be read online here.