Meteors Entering Mars’ Atmosphere Are Creating Clouds On The Planet

According to a new study conducted by a team at the University of Colorado Boulder (CU Boulder), the clouds that form in Mars’ thin atmosphere are caused by meteors. “Meteor smoke”, which is icy dust that is left behind when a meteor burns up in Mars’ atmosphere, is what partially creates the cirrus-looking clouds that are positioned around 18 miles above the planet’s surface.

Since clouds here on Earth are formed by particles, such as grains of dust or sea salt, that are carried into the air by the wind and then the water molecules condense around them which causes the clouds to form and grow. Mars, on the other hand, has barely any particles floating around since the atmosphere is so thin. But when small meteors enter Mars’ atmosphere, they often burn up which creates fine dust or “meteor smoke” which are the particles needed for clouds to develop.

Earth has noctilucent clouds that are created from the dust of meteors and are seen at an altitude of around 50 miles in the atmosphere. After the sun sets on Earth, the clouds still reflect the light of the sun, so they can be seen glowing a bright blue color.

While the dust from the meteors helps to create the Martian clouds, the thin atmosphere only allows for certain types of clouds to form. The clouds are normally very wispy and cotton candy-like – quite similar to Earth’s cirrus clouds. “But just because they’re thin and you can’t really see them doesn’t mean they can’t have an effect on the dynamics of the climate,” stated Victoria Hartwick, who is a graduate student at CU Boulder. In fact, the temperatures at the same height as the clouds could fluctuate warmer or colder by 18 degrees Fahrenheit.

According to Brian Toon, who is a professor at CU Boulder, “More and more climate models are finding that the ancient climate of Mars, when rivers were flowing across its surface and life might have originated, was warmed by high altitude clouds. It is likely that this discovery will become a major part of that idea for warming Mars.”

You can check out some pictures of the clouds on Mars. 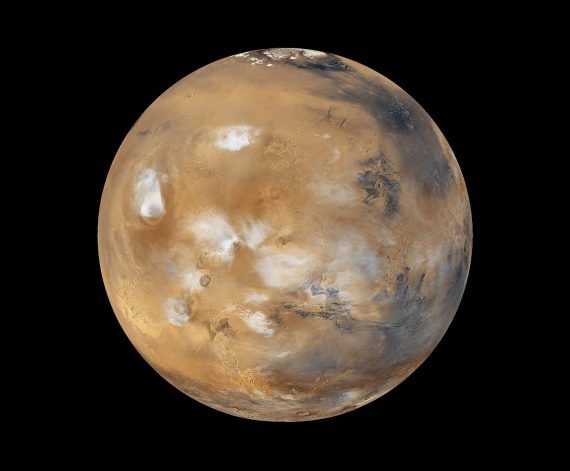 While the Martian clouds are much too weak and the atmosphere is too thin to produce rain, snow did fall close to the North Pole in 2008 and was witnessed by the Phoenix Mars Lander. Frost and fog has also been seen on the Red Planet due to a water cycle that occurs even without water on the surface and an extremely thin atmosphere.

Giant Mysterious Creature Recorded in Lake Michigan During a Storm