A massive and mysterious underground structure has been detected beneath the ancient Naryn-Kala fortress in Derbent, Russia. Scientists still aren’t sure what the void may be, but the current thinking is that the structure may be evidence of the oldest church in Russia, dating all the way back to 300 CE.

Derbent is in what is today known as the republic of Dagestan which lies on the Caspian Sea just north of Azerbaijan. Derbent is recognized as the oldest occupied city in what is now Russia and evidence exists suggesting Derbent has been inhabited since at least the 8th century. Because of its location perfectly situated between Asia and Europe, Derbent has changed hands many times throughout the centuries between Persian, Arab, Mongol, Timurid, Shirvan and Iranian kingdoms. In 1813 the city became part of Russia as a result of the Russo-Persian War.

The Naryn-Kala fortress is believed to have been built in the 6th century by the last kingdom of the Persian Empire shortly before the rise of Islam throughout the region. Today, the fortress is a UNESCO World Heritage site and is still being actively excavated by archaeologists. 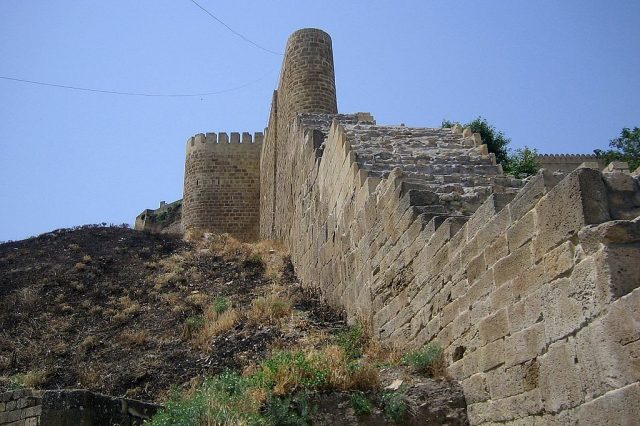 In one such excavation, scientists with the Russian Academy of Sciences and two Russian universities discovered a massive underground structure by using muon radiography, a revolutionary new form of imaging which leverages cosmic rays as a non-invasive source of radiation. Already, muon radiography has enabled scientists to detect previously unknown structures in the Great Pyramid of Giza and other archaeological sites.

The underground structure is roughly cross-shaped with a dome in the center and measures around 11 metres (36 feet) high, 15 metres (50 feet) from north to south, and 13 metres (43 feet) from east to west. It was originally believed that the structure was a water tank, but the latest muon radiography offers a previously unknown level of detail that suggests it may have been something more.

Natalia Polukhina, the senior author on the published study of the mysterious void in Naryn-Kala, says the shape of the structure and its location indicates that it likely played an important role in the fortress at the time:

The unusual building, in which we have put our detectors, has the shape of a cross, oriented strictly to the sides of the world, one side is two meters longer than the others. As the archaeologists who began excavations say, during construction, the building was entirely on the surface and it stands on the highest point of the Naryn-Kala. What is the sense to put the tank on the surface, and even on the highest mountain? It is strange. Currently, there are more questions than answers.

It’s still impossible to determine the structure’s purpose until actual physical excavations are conducted - if they ever can be without harming the ancient fortress.