Construction workers building a road near Jerusalem have accidentally unearthed the ruins of an enormous neolithic city. The ancient city is roughly 9,000 years old and is estimated to have been the home of 2,000 to 3,000 people. According to UPI, the site is the largest prehistoric settlement ever found in Israel and one of the largest ever found in the region.

The construction workers were breaking ground on a new road in the town of Motza, about five miles outside of Jerusalem, when they made the discovery. Construction was halted and a team of archaeologists were brought in to initiate a full-scale dig at the site. The accidental discovery turned out to be much more impressive than they could have imagined.

Representatives from the Israel Antiquities Authority (IAA)  announced the discovery on Tuesday, and say that the find is completely unprecedented. Hamoudi Khalaily from the IAA said in a news release:

"This is the first time that such a large-scale settlement from the Neolithic period -- 9,000 years ago -- is discovered in Israel. At least 2,000 to 3,000 residents lived here -- an order of magnitude that parallels a present-day city!"

That last comparison may be a little generous. Generally a population of 3,000 qualifies as more "one-horse-town" than city. Still, that's pretty good.

Even as recent as the discovery is, archaeologists say they've already found an incredible level of sophistication among the settlement. The city contains evidence of grain storage, animal domestication, and large scale agriculture. They've also found a variety of objects suggesting a great deal of trade with other cultures around the Mediterranean. Volcanic glass, sea shells, pearl jewels, children's bracelets, medallions and stone figurines have all been uncovered, along with tools such as flint axes, blades and arrowheads. 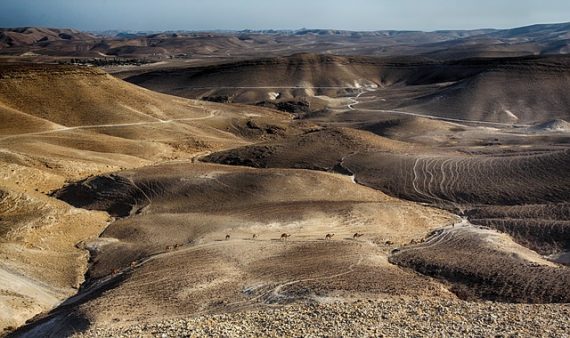 One of the more interesting finds may be the evidence of the ancient religious practices of the people in the region, such as burial rituals and spiritual offerings. According to archaeologist Jacob Vardi:

"In a place where people live, there are dead people, as well. Burial places have been exposed in and among the houses, into which various burial offerings have been placed -- either useful or precious objects, believed to serve the deceased in the next world. These gifts testify to the fact that already during this ancient period, the residents of this site conducted exchange relationships with faraway place."

Once researchers have had more time to study the site, more information on the culture that built this ancient city will likely emerge. Archaeologists have begun 3D modeling to record the settlement's layout so that they can continue to study it after the dig has completed.

Even this far into the future there's still enough hidden history that you can accidentally hit it with a shovel.