A well known, and very unique quality of certain ocean life is its propensity to produce eerie illumination, which can light up the deep in what range from faint glows, to colorful light shows. Such bioluminescence ranges from plankton and other maritime minutiae that flash in quick, propulsive little blasts of light barely visible to the naked eye, to random--and remarkable--kaleidoscopic light shows rippling across the ocean surface.

Such phenomena include, but are not limited to stories like those of colorful "spinning wheels" of light observed in various regions of the ocean, as I've detailed previously here at Mysterious Universe. 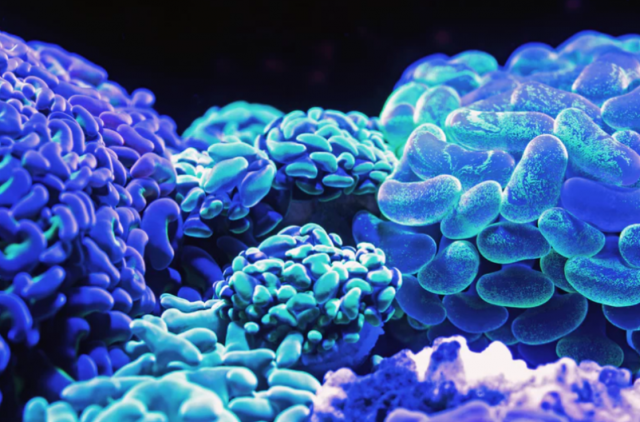 An account given of one such display described that a colorful show of spinning wheels of light, which was later discussed by N.J. Greig in an issue of the journal Marine Observer in 1996. “They were all about 3 meters in diameter and changed both size and shape while flashing intensely," the report stated.

However, "by (6 PM local time) the effect had completely stopped on the starboard side, and only the pulsating rings were left on the port side and, with these, the intensity of the light reduced until (6:22) when there was nothing more to observe.”

Such light shows are uncommon, but not particularly unique in maritime literature from over the years. In fact, they are not even unique to the Strait of Hormuz, where the report outlined above occurred in May of 1996. In fact, just months earlier on the date of October 3, 1995, a similar strange "light show" was observed by the crew aboard the M.V. Chilham Castle, which was sailing from Karachi to Kuwait when it observed a series of perplexing illuminations emanating from below the surface.

The crew aboard the vessel gave the following report of the incident, which was subsequently published, as with previous similar oceanic anomalies, in the Marine Observer in 1996:

"At about 2240 UTC, the observers saw a strange effect in the sea stretching for approximately 100 m from the parallel body. It was a soft white light, almost strobe-like in character that pulsed irregularly. The light was bright enough to illuminate the wheelhouse deckhead and seemed to emanate from below the water, almost as if something was shining a spotlight upwards, shimmering and twirling: psychedelic projections of the 1960s were brought to mind. Curiously, the wash from the bow was not illuminated and appeared normal, likewise the wake."

The phenomenon lasted for 6 or 7 minutes, faded, and then reappeared briefly. The night was clear and the visibility excellent.

On a rather eerie note, the description of the light seeming "to emanate from below the water, almost as if something was shining a spotlight upwards" is worth noting in the description, whether or not the display in question had some kind of technological origin.

It is certainly not impossible that such phenomena may have a natural origin. Around the same time, Discover Magazine reported on the discovery of novel forms of aquatic life that congregate around volcanic vents deep within the ocean. "At midocean ridges," they reported, "where new ocean floor rises up as molten rock from Earth’s interior, where cold seawater mixes with the rising magma and, heated to 650 degrees, spews back up through chimney-shaped hydrothermal vents, researchers stumbled across bustling ecosystems."

However, such molten meetings between lava vents and seawater would be an awkward explanation for the kinds of luminous curiosities that appear below the surface of various regions of our oceans, as seen from the surface by nighttime crews in the right place and right time.  Still, lava has been offered as an explanation in the past when unusual illuminations have appeared on the ocean surface, as with an incident in 2014 where a Dutch pilot photographed an unusual light display on the North Pacific ocean.

It may be that we're a long way off from determining what, precisely, the source of all of the ocean's many strange and colorful "light shows" could be. Whether some natural phenomenon already well known to science, or something else altogether, such illuminations provide just another example of the many beautiful little oddities planet Earth still has to offer.