Those folks planning to participate in the “Storm Loch Ness, Nessie can’t hide from us all” event in September may be too late – a Loch Ness tour boat captain in the middle of his spiel about how to find the monster was interrupted by a passenger who pointed to something strange on the sonar screen – something that has now taken its place on The Official Loch Ness Monster Sightings Register as the eight sighting of 2019. Is this the big one?

“I would like to think this is our creature, Nessie. It’s my first year being the skipper in the boat in five months and I’ve never seen it or had something that big on the sonar.”

According to The Scottish Sun, Mike Bell, captain of the now aptly-named Nessie Hunter, got his now-famous tap on the shoulder on June 27 during one of his daily cruises around the loch. The sonar screen (see a photo of the sonar screen and the boat here) showing what was going on underneath the boat to a depth of 100 meters was suddenly picking up something large at about 35 meters. How large?

“The standard size on the sonar is usually a sharp prick suggesting a small fish. The large line about 35 meters in the water was about 10-25 feet (3-7.6 meters). An object of that size I would think is way too big for the normal species in the loch.” 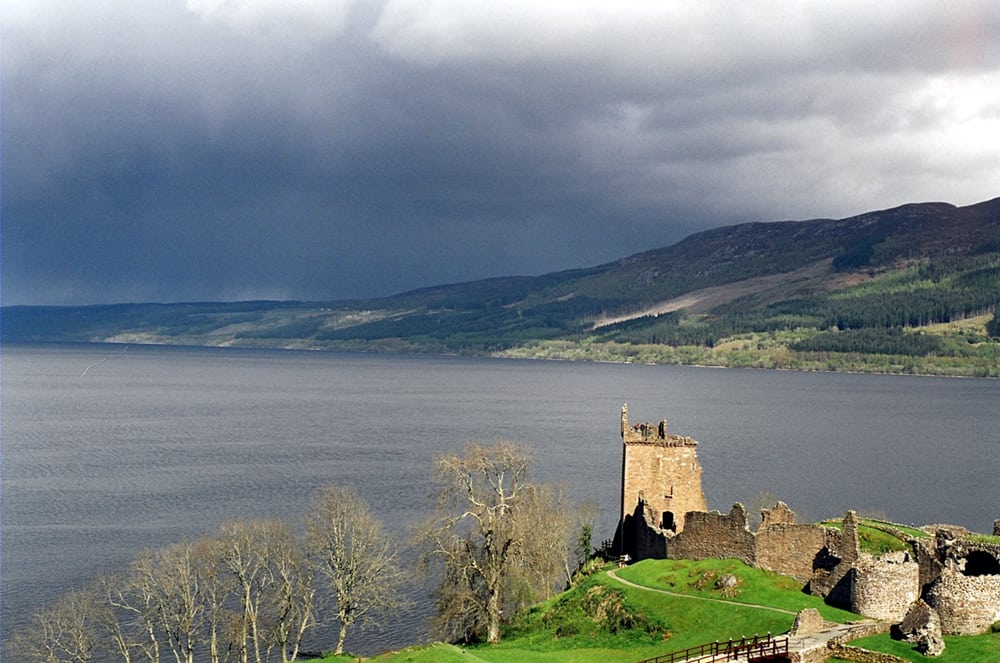 Bell’s dad, a more experienced Loch Ness boat captain, says he’s never seen anything that big on his own sonar. While being a good boat captain, the younger Bell is also a good tour salesman, so he immediately sailed around the spot trying to pick up whatever it was on sonar again, but had no luck giving his passengers a second thrilling moment to post on Facebook. Bell was near Urquhart Castle, the prime spot for Nessie spotting, although the Stormers plan to storm 18 miles south of there. Of course, as intrepid Nessie fans know, there are other ways to spot things that might be the elusive creature than sailing and storming.

“Regular webcam watcher Eoin O’Faodhagain reported seeing two objects was on the 10th of July at 12.53 pm. They were viewed on the webcam moving in the direction of Urquhart Bay, with a cruiser in the distance heading north. He explained that he thought the manner and closesness of the two moving through the water was very strange. The shape of both objects were very unlike boats and were in the region of 20 feet long in comparison with known cruisers that operate around that area.”

Yes, he’s still sitting in his armchair in Ireland watching the Loch Ness CCTV feed. The Official Loch Ness Monster Sightings Register reports that Eoin O’Faodhagain has added to his growing list of alleged Nessie sightings with two more on July 10 (see the screen capture photo here). Eoin says that they don’t look like boats, which apparently is enough to get listed as an official sighting. At that distance, they don’t look like anything recognizable, but that doesn’t make them twin Nessies.

Nor does a blip – albeit a large one – on a sonar screen mean Mike Bell and his passengers pinged a monster. It could have been a brief sonar malfunction, a massive object that wasn’t a fish or some other anomaly. Until Bell finds it again, the Stormers storm one to the surface or those DNA testers finally release the results of their analysis of Loch Ness water samples, we have to deal with Nessie spotters like Eoin.