Strange Phenomena and the Haunted Turnpike of West Virginia

The West Virginia Turnpike is a four lane toll road that stretches 88 miles along portions of Interstates 77 and 64 between Princeton and Charleston, West Virginia, and it is known for its numerous tunnels and twisting, treacherous run through breathtaking scenic vistas, including views from Flat Top Mountain and the Bluestone Gorge. When construction began in 1952 it was considered an ambitious undertaking and quite the engineering marvel of its day considering its steep grades up mountainous terrain, meandering route, and the necessary removal of an estimated 33 million cubic yards of earth. When it opened on November 8, 1954 it did so to great fanfare, and it carried traffic from Charleston to Princeton in far less time than before. It would go on to be upgraded and expanded, and although it is certainly indispensable for the people of the region it has always had some darkness permeating its history, and indeed the West Virginia Turnpike is considered to be ground zero for all kinds of hauntings and strange phenomena.

Looking at the history of the road it is perhaps not so surprising that it should have its share of ghostly activity. From the very beginning the perilous construction took a heavy toll on construction workers’ lives, and the course itself was so harrowing in some areas that the turnpike had a disproportionate number of accidents and fatalities every year. Indeed, it is largely due to this difficult drive and the terrain that the WV Turnpike is often referred to as “88 miles of miracle,” and although with renovations it has become safer in recent times, it still has that air of menace hanging over it. There were also numerous mining disasters in the vicinity in the past, as well as the removal of many family graves that occurred during construction, with many corpses removed and interred in other cemeteries to make way for the new road, and rumors abound that many of the bodies were never moved at all when it was all paved over, all of which only adds to the sense of brewing darkness here.

It is for these various reasons perhaps that there have been reported numerous instances of paranormal activity, especially along a 15-mile stretch of the turnpike between Beckley and Mossy, with fleetingly glimpsed apparitions and ghost lights often seen. Many of the supposed phantoms lurking here take the form of mysterious hitchhikers seen and even picked up by passing motorists, only to have them vanish into thin air right before their eyes. One report typical of this comes from a witness who says on Theresa's Haunted History of the Tri-State:

My mom and I had our own phantom hitchhiker story along this road a few years back. We were visiting my grandmother in Beckley and passed a scraggly looking young man wearing dark clothing and carrying an olive green army-like sack. This was an area where there were no exits for many miles in either direction, and we never saw a broken down car or anything in the area. We both looked in the rear view mirror as we passed him, but he had mysteriously vanished. We turned around at the nearest spot in the road and went back, just to satisfy our own curiosity, but we never did find him again and saw no place where he could have been, nor no cars which could have picked him up.

Perhaps this same mysterious figure has been seen by numerous others on the turnpike, with one particularly spectacular incident reported by an actual state trooper. The story goes that a scruffy looking, destitute young man was picked up and arrested by the trooper for hitchhiking, which is illegal here, and he was handcuffed and put in the back seat. A little way down the road the trooper looked to see what the apprehended man was doing only to find that he had completely vanished to leave the handcuffs lying on the seat almost as if carefully placed there. This isn’t even the only run-in with the supernatural encountered by a state trooper on the road, as another story says a little girl was found lost and wandering along the turnpike at night, only to disappear when she was put into the cruiser to be taken home. It is all very spooky, and shadow figures and vanishing apparitions of people lurking along the side of the road are not uncommon at all on this stretch of road.

There is also an actual haunted truck stop that once existed along the WV Turnpike. Called the Morton Truck Stop and Glass House restaurant, it was once perched right along the turnpike and served as a fueling station for state vehicles as well as a pit stop for weary travelers. One of the main phenomena that was said to plague the truck stop was purportedly ghost lights that were said to orbit the building and to even phase through its walls to go passing right through it, often in front of terrified patrons. Besides this there were all of the typical unexplained noises, disembodied voices, and moving objects of a haunted building, as well as objects disappearing and reappearing in strange places. The truck stop has since been torn down, but ghost lights are very common in the area, with orbs of light often seen to follow vehicles for miles before blinking out of existence. 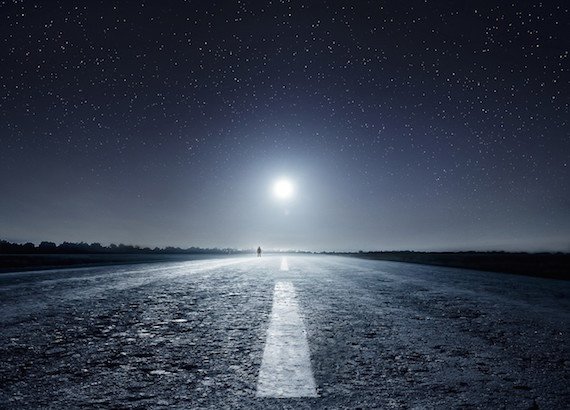 Besides ghost lights and phantom hitchhikers, the WV Turnpike is also allegedly a hotspot for UFO sightings, and one such strange account comes from a State trooper who saw something in the sky while on patrol that he struggles to explain. In his account on West Virginia Ghosts he explains of the incident:

In the many years I patrolled this area I never saw anything strange except for one twenty second interval one night while on patrol. This night something drew my attention skyward. Whether it was lights or I just happened to look skyward, I just don’t know.

I was near Nuckles, or near what was then The Morton Truck Stop now known as the Howard Johnson restaurant about mile 60 on the WV Turnpike. The spot was deep between two hills as it is today. The object I saw was 1000 feet to 1500 feet high and looked to be 15 to 20 feet across. It was very lit up and sparkled like old time Christmas sparkles at the rear of the UFO.Within 15 seconds it was gone, dazzling lights and all leaving me dumbfounded. I was so anxious to see someone to ask if they had seen what I saw or what I thought I had seen.

Even though I was convinced that I was wide awake and alert. I decided not to mention the incident to anyone. Then when news stories began to appear in the local daily newspaper about UFO sightings down the river (Dunbar) below Charleston. I volunteered to tell that I had also sighted the same objects. Later, a fellow Turnpike patrolman told of seeing the same sight or object. All witnesses gave almost identical descriptions, like to this day I remember what this object looked like. I don’t know what it was but I know that I have never seen anything before or since that resembled this object.

The West Virginia Turnpike certainly has quite a lot of weirdness for such a comparatively short stretch of road. What is it that makes these forces gravitate towards it? Is it the dark history, the deaths, or something else? Or is it just urban legends and spooky lore perpetuated by tired drivers along this dark lane? Who knows? The only way to find out is to take a drive down it yourself.