There are many haunted places in this world, and it is not at all confined to mere decrepit old buildings, cemeteries, and abandoned sites. All manner of locations have managed to accrue tales of paranormal activity, and in this case we are looking at rivers. There have been several rivers that have managed to become quite the haunted places, and here is a selection of some of these. So let's strap in and head down these dark waters towards mysteries unsolved.

Our first stop on this tour of haunted rivers is the U.S. state of Maine, where we have the malevolent Saco River, of Oxford County, which actually begins its run in New Hampshire. Most everyone in the area has heard the tales of the curse of this stretch of water, the origins of which apparently begin in the 1600s. It all starts with the story of the Native named Squando, chief of the Saco tribe, who had a wife and a newborn infant they had welcomed into the world. All was as it should be, that is until trouble came calling. The legend has it that Squando was going down the river in 1675 with his family when they encountered three drunken English sailors looking for trouble. The foreigners apparently snatched the baby away and threw it into the river, under the misguided myth that Natives were natural swimmers, but the baby sank right away. The mother was able to get the infant to safety, but it would tragically die not long after.

In some versions of the tale it was not an infant, but rather a young woman, but in every instance it is the chief’s daughter, and he is not happy about it. In his complete and utter desolation and despair, the powerful chief Squando then apparently went about casting a potent curse upon the river, proclaiming that from then on there would be the lives of three white men taken on the river every year. Although official records of drownings and deaths on the Saco River don’t seem to be available, the story goes that indeed just as prophesied there are three deaths per year of white people on the river, with many locals swearing this is true. Of course, the river is rather rough in some places and accidents are bound to happen, so there is the chance this is all just coincidence tied with superstition, but the “Curse of the Saco River” is still talked about to this day. Interestingly, another river in Maine with its own strange phenomena is the Allagash River, of northern Maine, which supposedly has intense UFO sightings and a ghost light that roams its length.

Also in the United States is the Wolf River, of west Tennessee, at a section perhaps fittingly called the “Ghost river.” It is an immensely beautiful river that runs through some pristine and unspoiled countryside, yet it has a darker side to it all. It is here that there have said to been the spectral forms of Civil War era soldiers wandering about the shores, and ghost lights bobbing along out in the trees. Moving along we come to the magnificent Grand Canyon, at a place called Blacktail Canyon. Here there have long been reported the sounds of ghostly Native drums from another era, as well as shadowy apparitions lurking along the riverside. Campers to this area have also reported being plagued with horrific dreams while they are there.

In the state of Oregon there is the Rogue River, with its haunted locale called Battle Bar. Here there was once a great battle between the U.S. cavalry and the native Takelma Tribe in 1856, in which many died horrific deaths. There is also the tragic story of a settler named Bob Fox, who sought to build a fishing resort on the river, but who was murdered in his own cabin. It might be because of these tragedies that the river has become known for all manner of ghostly phenomena, including seeing spectral dark figures lined up along the shore.

Staying within the United States for a moment we come to the the waters of the Chicago River between Clark and LaSalle Streets, Chicago. It was here that on July 25, 1915 the city suffered one of its worst tragedies ever when a steamship called the SS Eastland sank to take its 2,572 passengers and crew down with it, and 844 of them would not survive. Along the river many of the buildings were turned into morgues to house the corpses, and to this day many establishments along this stretch of the river are said to be haunted, with a general sense of dread and negativity reportedly hanging over the area as well. There are also numerous reports of strange apparitions walking along the riverside or even lurking beneath the waves here, and it seems that perhaps the tragedy that occurred here all those years ago has left some sort of stain on this place. 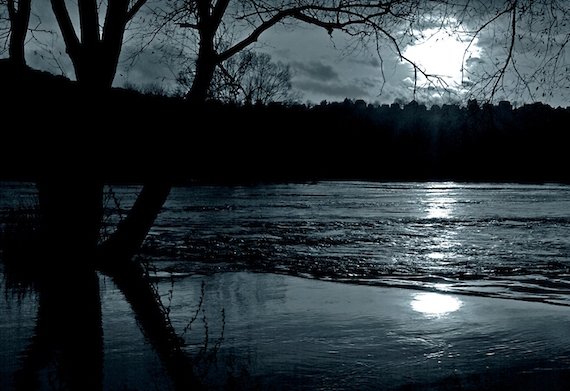 Moving back to the state of Oregon there is the Sandy River, which is apparently known for its unusual rate of drownings and of people claiming to have been grabbed and pulled under by unseen hands. Of course apparitions are also seen here as well, as well as inexplicable mists floating over or even rising from the water, and an interesting report of paranormal activity at the river comes from a Reddit user “u/heldris,” who says she was down at the river one evening with her boyfriend and best friend, Dylan, at around 2 or 3 AM. She says of her bizarre experience:

Dylan and I were wandering around picking up rocks with the boyfriend trailing behind and at one point I whirled around suddenly to toss a rock into the river or something and I stopped. What I saw appeared to me to be the silvery, misty, but definitely human form walking out of the river towards the bank. I say walking, because it appeared to be moving that way, but as I looked down it didn't quite have feet. The lower part of the body just faded sort of above the knee. And eventually, the close it got, it faded away from the bottom up until it disappeared altogether.

Dylan and I were the ones at the edge of the river at this time and we just silently looked at each other, then turned and moved swiftly back to the car. Once we reached it, and the boyfriend reached it as well, one of us said: "Did you see that?" and then we stopped and I asked my boyfriend to listen to our stories of what we had seen separately, then tell us if what we said was the same. So he stepped a little ways away to talk to Dylan, then came back to talk to me, and he confirmed that we both said we saw the exact same thing.

Now, this river had already taken three or four lives that first month of summer alone from people swimming in it and getting caught under rock ledges or going out too far and being swept away. I can't say what we saw was a spirit, I don't know, but I do know it wasn't just "mist rising from the water". The area we were at didn't really have any way to create any kind of mist, no drop offs or super terrible current. Plus it was the middle of the night so there wasn't a lot of light to catch water particles and make them look like a human shape moving toward us. (As you can see, I've attempted to debunk this a bit myself). 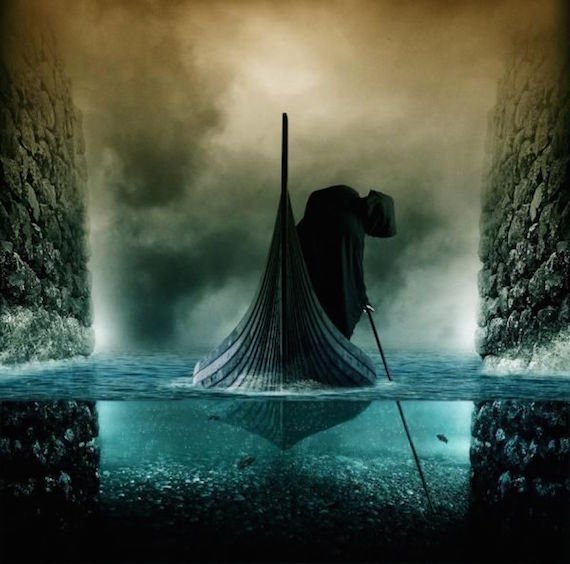 One very supposedly haunted or cursed river lies well out of the United States, over in the country of India. Flowing right past New Delhi, one of the most crowded urban places in the world, is a river called Khooni Nadi, or also commonly by its nicknames, “The Bloody River” and “The Bermuda Triangle of Delhi.” One of the most common stories revolving around this little tree lined river in North Delhi’s Rohini district is that it has the unsettling habit of sucking people down beneath the water to never be seen again, just vanishing off the face of the earth, and many disappearances in the area have been blamed on this. The river is also plagued by disembodied crying or wailing, the source of which can never be found, and there are of course apparitions seen either entering or coming out of the murky waters. Making it all even eerier is that the river often is said to turn the color of blood, although whether this is due to any paranormal origin or just plain pollution is anyone’s guess.

These have been some of the more little-known haunted waterways of the world, and it is hard to tell just where the answers may lie here. Of course lore and tragedies have a way of infusing certain areas with a dark reputation for supernatural activity, so we could be looking at pure urban legend. If one is to add in people who get pulled away by strong currents, the river in question can take on an even more sinister quality as its legend grows. Are we looking at just myth here, or could there be something more to this? No matter where the answers may lie, these rivers will continue to flow through the landscape and through our imagination, and the stories will likely go floating along with them.

An Uncommon History: Strange Things Were “Afoot” at Oregon’s Crater Lake, According to These Former Park Rangers