The Bizarre Tale of a Cursed Russian Ghost Ship

The Russian ship called the Ivan Vassili began its life in St. Petersburg in 1897, where it was built as a civilian steam freighter for the purpose of hauling freight across the Baltic Sea from Russia to the Gulf of Finland. Built of thick iron plates over a wooden hull, and equipped with a top of the line steam engine that had a range of 2500 miles at a speed of 8 knots, it was a relatively sturdy, fast, and reliable vessel, and did its job with a perfect record until the year of 1903 and the coming of tensions between the Russian Empire and Japan that were threatening to boil over into all out war. It was during this tumultuous time of brewing bloodshed that the Ivan Vassili would take a turn into the weird and paranormal.

As war lurched towards them, the Ivan Vassili was re-purposed and its role changed to that of a military supply ship for the Russian Navy. To this end, the vessel was tasked with making a long and treacherous journey towards Port Arthur, Manchuria and Vladivostok to deliver supplies to the ships stationed there. It was over 3,000 miles away around the tip of Africa, and they made a stop at Cape Town, South Africa along the way in order to resupply their coal reserves for the last leg of their harrowing voyage. It was then that something about the ship changed, and an inexplicable force began to make itself known. It started rather innocuously enough, with the crew constantly feeling as if they were being watched and of hearing footsteps when no one was there, as well as experiencing spots of frigid cold out of nowhere. In addition to this, it was reported that there was a sense of extreme negativity and an almost palpable cloud of menace permeating the air, to the point that arguments began to break out among crew members for no reason at all. This could have been attributed to nerves and the rigors of being out at sea for so long, but things would get more bizarre still.

One evening, a breathless and very scared crewman came running to the Captain with quite the tale to tell. The rattled man explained that he has been on lookout duty when a ghostly figure enveloped in a glowing mist and with distorted features strode across the deck and disappeared behind a light boat. The man also said that it had been disorienting to even set eyes upon it, and that it had seemed to exude an overwhelming sense of dread in him. Along with the other unusual activity that had kept the men on edge this turned out to be quite a terrifying revelation, and it got even scarier still when the following evening the men suddenly and without warning flew into a wild brawl during which one of the men would throw himself overboard to his death. There was no explanation for why the fight had broken out, and everyone said it was as if a malevolent force had suddenly overcome them.

This would not be an end to this bizarre phenomenon, as just a couple of nights later the same thing happened again, with the men frightened for no reason and overcome with an anomalous compulsion to viciously fight each other. Once again a man jumped over the side to plunge to a watery grave, and once again the crew calmed down immediately after and none of them could figure out what had possessed them to fly into such an agitated state. Rumors began to be whispered among them that an evil force had taken up residence on the ship, and that it wanted to harm or kill them. This was frightening enough that when they reached Vladivostok over a dozen men fled to abandon the ship, some of them so panicked that they jumped from the ship to swim to shore.

The deserters were detained and placed under armed guard, and they would be forced to continue their journey on that cursed vessel when the Ivan Vassili left port on its way to Hong Kong. Along the way there would be another inexplicable brawl, another man would plummet to his death from the deck, one other crewman would allegedly drop dead from fright, and upon reaching Hong Kong Captain Sven Andrist would promptly commit suicide as well by climbing up onto the edge of the deck without a word and dropping off to the water below. Now convinced that the Ivan Vassili was truly damned, the wild-eyed, terrified crew fled yet again, and this time they would evade being rounded up, leaving the vessel an empty husk that was possibly infused with supernatural forces.

While the men may have been convinced that there were evil forces possessing the Ivan Vassili, to the Russian government it was just a perfectly good ship, so a new crew and Captain were brought in and it was sent on its way to Sydney, Australia to pick up a shipment of wool. The vessel made it to their destination without incident, but as they pulled into port the new Captain allegedly suddenly lifted his pistol to his head and shot himself dead for no apparent reason at all. The new crew, who had heard the stories of the previous incidents and the tales of the ship being cursed and haunted, were spooked enough by this sudden violent suicide that they refused to continue, and yet another crew had to be found. This was easier said than done, the word was out on the Ivan Vassili and its sinister reputation, and it purportedly took months before a crew could be gathered again. 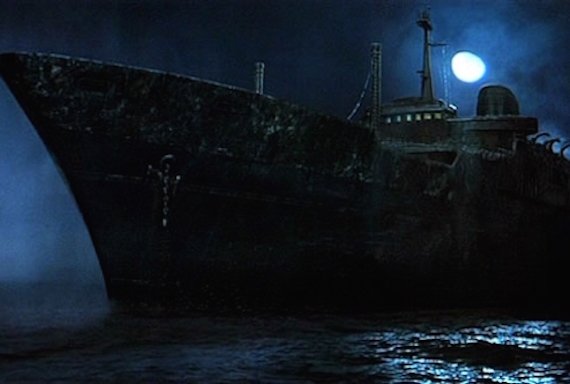 The doomed Ivan Vassili then set out once again, this time over the horizon towards San Francisco, California. However, whatever madness had gripped the previous men came for this crew as well, and before they were even halfway to their destination two men had died, others had gone insane and been locked away in their quarters, and the Captain had killed himself with a bullet to the head. The men panicked and changed course, heading back towards Russia, where the Ivan Vassili was permanently put out of service and eventually burned. According to the lore, as the flames consumed it there was an unearthly shriek that rose up from the charred, smoking vessel, and this howl of anguish continued until the ship was no more, the smoldering hulk slipping beneath the murky waves along with whatever demonic entity dwelled within it.

Was any of it was real? If this ever really happened in any true sense what would we be dealing with? Is this a ghostly presence, something demonic, or just one of those things we could never possibly hope to understand? Why would it want to kill those men or drive them to insanity? Why would it only take effect when the ship passed South Africa? If any of it is real, it poses many questions that we cannot answer at this time, and we probably never will. It is all quite the scary tale, indeed, but unfortunately there is not much to corroborate these events or prove they ever really happened as described. Actual documentation on the Ivan Vassili or its various crews is scant to nonexistent, and most of the information on this story seems to originate from the now out of print 1965 book on the unexplained called Landmark Invisible Horizons, by Vincent Gaddis. This means that there is the very good possibility that the whole thing is made up, an imaginative tale that has been picked up as being real, which wouldn’t be the first time this has happened in the paranormal world. It could also be that this is lore that originated with the tale of the novel Dracula, which was released the same year that the Ivan Vassili was supposedly built and which also features a ship carrying Dracula which experiences its crew dying one by one. Whatever the case may be with the mysterious Ivan Vassili, it sure is a spooky tale and fascinating lost historical oddity.

Sight Unseen: How Metamaterials and AI Could Improve the Stealth Aircraft of Tomorrow