Within the remote, nearly impenetrable forests of the island of Flores, in eastern Indonesia, live the indigenous Nage people, long the keepers of this land. Like many other native tribes, they have their own rich history and traditions, and also legends. Among these is the tale of a race of strange jungle dwelling creatures these people call the Ebu Gogo, coming from their words ebu, meaning “grandmother,” and gogo, roughly meaning “one who eats anything." The creatures themselves are said to be a race of slightly built bipedal hairy humanoid beings, and although they are firmly entrenched into the lore of this island people, there is also the possibility that the Ebu Gogo could exist outside of mere myth, perhaps out there roaming the wilderness.

The Ebu Gogo, also known by other regional names such as the Ine Weu and Poti Wolo, are described by the Nage as standing between 4 and 5 feet tall on average, and with decidedly ape-like features, including hair-covered bodies, large mouths, broad, flat noses, and prominent eyebrow ridges, as well as proportionately very long arms and pot bellies. In the lore these creatures are depicted as being very fast and agile runners and climbers, and are said to have the ability to talk amongst themselves in their own rudimentary language, as well as to mimic human speech, although they show no sign of using fire or tools. Far from benevolent denizens of the forest, the Ebu Gogo traditionally have a rather negative image attached to them. They are seen as ravenous gluttons who will eat anything and raid villages to steal food or to even kidnap people to eat, and they are most often said to be of a rather nasty disposition, eager to chase people out of their territory. 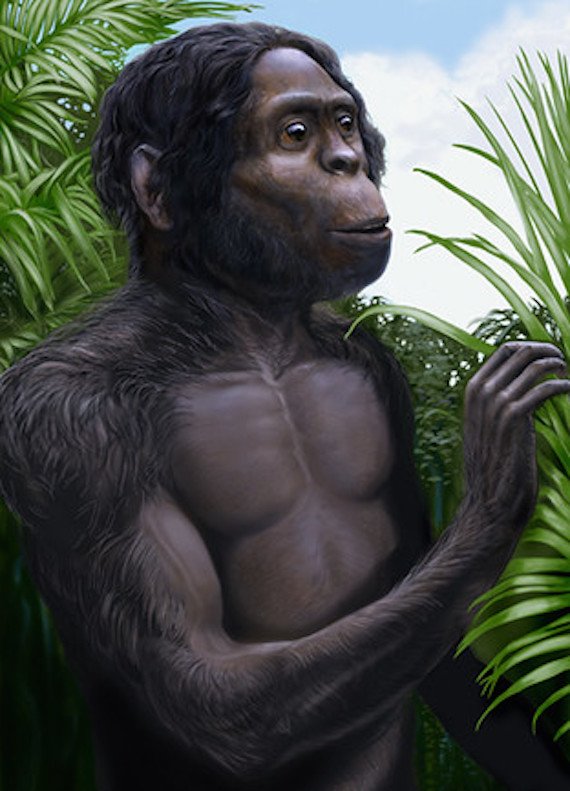 Despite this unsavory reputation, the Nage said that they long had an uneasy truce with the Ebu Gogo, occasionally trading with them or even having feasts together, but the creatures supposedly became increasingly bold and devious in their ways. When many village children began to go missing the Ebu Gogo were blamed, and the Nage then apparently went about exterminating them. The most common tale of this has it that in the 18th century the Nage tricked the Ebu Gogo into accepting a gift of clothing fashioned from highly flammable palm fiber, which the greedy creatures eagerly took into the caves they inhabited. When this was done the villagers threw torches in after them, which ignited the fibers to create a great fire that wiped out almost all of the Ebu Gogo, with the few survivors hunted down and killed. However, there have always been those stories that a few of them managed to survive and eke out an existence in the deepest jungles of the island to this day.

The Ebu Gogo were apparently sighted often during the 19th century by both natives and foreign explorers and settlers alike, but after this modern sighting drop off dramatically, although the occasional story will pop up. Perhaps one of the most recent of these is the story that according to a Chief Epiradus Dhoi Lewa of Boawae, a female specimen was actually captured in a village in 2004, with the main feature being that she had extremely pendulous breasts that could be draped over her shoulders, a common detail for female Ebu Gogo. Unfortunately, this mysterious woman escaped and fled back into the forest, so there is no way of knowing who or what she was.

Although the Ebu Gogo seems purely mythical, the stories and sightings received a bit of an air of credibility in 2003, when the remains of a new species of diminutive hominin was discovered at the Liang Bua cave of Flores island. The species, called Homo floresiensis, is marked by their very small bodies, standing only 3 to 4 feet high, earning them the nickname “Hobbits.” These creatures have long been believed to have lived on the island up to as recently as 12,000 to 13,000 years ago, meaning they could have not only lived alongside Homo sapiens, but might have even survived to the present day on the island. Considering the size of H. floresiensis and the similarity in appearance to the Ebu Gogo of myth, it has been suggested that they are perhaps even one and the same, with the Ebu Gogo some remnant population of the Flores Hobbits. Indeed, the existence of H. floresiensis, which may have spread out to other islands, has been used as a possible explanation for other hairy hominid cryptids in the region, such as the Orang Pendek of the mountains of Sumatra or the lesser known Orang Kardil, which are said to be miniature wild people who can use rudimentary tools and weapons such as spears. However, there are a few problems with the idea of H. floresiensis being behind the reports and mythology of the Ebu Gogo. One is that recent research carried out in 2016 has perhaps pushed away the known extinction date of H. floresiensis back from 13,000 years to more like 50,000 years, making it seem dramatically less likely they would have survived to the present without being discovered. There is also the detail that although the appearances and geographical region match, the Flores Hobbits are known to have used fire and tools, something the Ebu Gogo are not known for at all. Yet, whether the Ebu Gogo were H. floriensis or not, they seem like they might very well have been based at least in part on some real animal, based in some grain of truth, and Gregory Forth, Professor of Anthropology at the University of Alberta, Canada, has said of this:

However much ebu gogo might recall Homo floresiensis (or vice versa), it is therefore clear that the first figure equally resembles characters that are generally considered to belong to myth and fantasy. (Another fantastic attribute of ebu gogo is their reputed proclivity to swallow things whole, including rice mortars, puppy dogs and piglets.) ... Certainly there are problems in interpreting ebu gogo as directly reflecting local memories of Homo floresiensis. Yet whatever the derivation of the Nage representation, ebu gogo really do seem different from the various categories of spirits that Nage describe with equal credulity -- and to that extent, I believe the possibility [that they represent a real animal] should be taken seriously. As noted, Nage themselves distinguish ebu gogo from "spirits" (a general category contextually designated as nitu) and they do so explicitly with reference to the hairy creature's lack of extraordinary powers -- for example, the ability to disappear, change shape, transform into animals, and so on.

So what is or was the Ebu Gogo? Are we looking at some sort of undiscovered primate, a lost tribe, or a remnant population of the supposedly extinct Homo Floresiensis? Is it a cultural memory passed down for generations from another time when their people lived alongside these creatures or something else? Or is this all just pure myth and folklore? If so, how is it that it has managed to penetrate into reports from even settlers and outsiders who would know nothing of this lore? Is there any connection between the Ebu Gogo and other island hairy hominids such as the Orang Pendek? We are far from finding the answers to any of these questions, and for now the little hairy people of the jungles of Flores remain a mystery.