The Horror That Came To Matawan Creek

It was the summer of 1916, and the area of Beach Haven, on Long Beach Island, New Jersey was in full on tourist mode. Here droves of beachgoers were pouring in to swim, sunbathe, and generally get away from the stresses of the era such as a deadly heat wave that was gripping the region of the time, the looming specter of World War I, and a polio epidemic that was rattling the nation. These people were looking for some respite, to enjoy a day out away from the horrors of the world, but horrors would come for them all the same, when out of the depths sprang a fearsome force of nature that seemed to know no limits to where it could reach and how much chaos it could incite. Thus would begin a reign of terror that would show that nowhere was safe from the reach of the predators of the sea.

The whole incident began on July 1, 1916, at Beach Haven, and a Penn graduate named Charles E. Vansant was out frolicking in the waves like everyone else out for some escape from the oppressive heat. At some point Vansant began shouting wildly, and at first people thought he was simply calling for the dog he had been with, but it soon became apparent that something was truly wrong. When lifeguard Alexander Ott and a bystander named Sheridan Taylor swam out to him, they found that a large shark was clamped down on the man’s legs, and it was so relentlessly set on bringing the victim under that it apparently held on and followed even as the men pulled him to shore. Vansant’s leg would prove to be almost completely stripped of meat, and he would go on to tragically bleed to death. 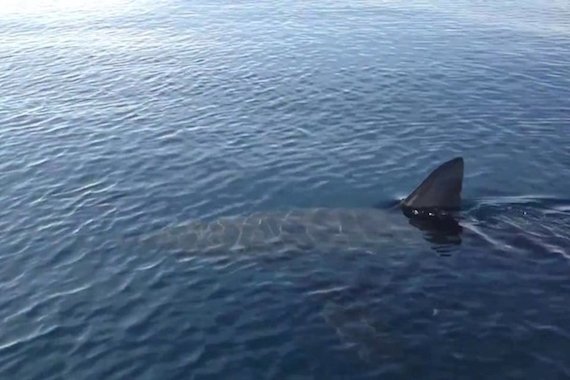 Despite this horrific tragedy, the beaches remained open for business as usual, despite boaters making sightings of large sharks prowling about in the area, and this would prove to be fatal yet again. Just five days after the Vansant attack, another tragedy struck at the resort town of Spring Lake, New Jersey, just 45 miles north of Beach Haven. On this occasion, 27-year-old Swiss immigrant Charles Bruder was swimming 130 yards offshore when he was viciously bitten by a shark in the abdomen and legs so severely that his legs were torn clean off to turn the water red. Rescuers would manage to pull him from the water, but the damage had been done, and he bled to death before he could be brought to proper medical attention. This particular attack would lead to mesh barriers being set up along beaches of the area, but panic was beginning to set in and boats full of shark hunters started prowling the shore.

This would all become a full-fledged shark panic along the east coast, and it was rather unprecedented at the time for two such attacks to happen in such close proximity to each other. Ichthyologists at the time had little knowledge of shark attacks, and they tried to downplay it all by saying that the fish had attacked by mistake and that this was not in their nature. It was thought at the time that sharks simply did not attack humans. There were many efforts by these experts to explain it all away, with one former director of the Philadelphia Aquarium James M. Meehan saying:

Despite the death of Charles Vansant and the report that two sharks having been caught in that vicinity recently, I do not believe there is any reason why people should hesitate to go in swimming at the beaches for fear of man-eaters. The information in regard to the sharks is indefinite and I hardly believe that Vansant was bitten by a man-eater. Vansant was in the surf playing with a dog and it may be that a small shark had drifted in at high water, and was marooned by the tide. Being unable to move quickly and without food, he had come in to bite the dog and snapped at the man in passing.

Nevertheless, increased shark sightings in the area had people on high alert, the beaches were empty, and the news was all about vicious sharks on the prowl. Meanwhile, folks at the quiet area of Matawan Creek, a meandering placid tidal inlet of Raritan Bay, about 15 miles inland from the seaside and a peaceful town removed from the throngs of beach goers. This was a place where shark attacks and the news of fearsome predators prowling the seas would have just been background chatter and in a world away from their own concerns. The creek itself is a pristine, quaint little place far enough from the ocean that sharks would not even be in their minds at all, to the point that when a boat captain, Thomas Cattrell, reported seeing a massive shark swimming up the creek few paid much attention to it. This would prove to be a mistake.

On July 15, 1916, 11-year-old Lester Stillwell was out at the creek with some friends off a dock on an otherwise fine summer day. As they swam they saw a dark shape float by which they at first took to be a log but which soon turned out to be a shark in the most unlikely of places. The boys screamed and swam towards shore, but Stillwell was not lucky enough to make it, being grabbed by the beast and pulled under right there in front of horrified onlookers. During the chaos, 24-year-old Watson “Stanley” Fisher jumped into the water to try and save Stillwell, only to become a target of the beast himself, with the shark ravaging him to death before swimming off through the bloodied water. Both victims died, and this would not even be the end of it.

Later that same day, a 14-year-old Joseph Dunn was swimming in the creek when death came for him just about a half a mile from the other attacks. In this case he would live to tell the tale, as although the shark took his leg he was fortunately pulled to safety by his brother, leaving him with horrific wounds. This was the last straw as far as locals were concerned, and it became a common sight to see shark hunters out by the creek with loaded weapons and sticks of dynamite seeking to kill the beast. This was an unprecedented anomaly for such a vicious man-killing shark to appear within such a peaceful freshwater locale, and it was ominous to say the least. There were also rewards offered for the carcass of the killer, and many sharks were caught off the coast and presented and the culprit, yet there was no evidence either way, although one great white shark was caught in Raritan Bay with an alleged 15 pounds of human remains in its gut.

The attacks would dry up after the Matawan Creek Incident just as suddenly as they started, leaving us to grasp and grope at possible answers. Since the exact type of shark was never concretely identified it has been theorized that it must have been a bull shark, a species well-known for its ability to tolerate freshwater as well as for its aggressive willingness to attack humans. However, many witnesses said it was more like a great white shark in appearance and size, although this would be unusual for a species not known to venture at all into even brackish waters. Still, the great white captured with human remains in its stomach marked the end of the terror, so what are we to make of that? Whatever it was, the Matwan Creek attacks  have gone on to become entrenched in pop culture, serving as the inspiration for the the novel and film Jaws, and still managing to keep people away from the water all of these years later, worming its way into the public consciousness regardless of whether you’ve ever heard of Matawan Creek or not. It has gone on to be a case that has been picked apart and discussed, and no matter what the culprit might be, it has made an indelible mark upon the landscape, and proven that we can never be too sure what nature has in store for us.