We are far from documenting all of the great mysteries of our history and prehistory. Throughout the world there are places that have remained hidden from out gaze right up into modern times, sequestered in a realm beyond our knowledge to evade our insatiable drive for discovery. One such place sat entombed in darkness and forgotten for tens of thousands of years in a remote area of France, stuck in time even as the world above it marched on into new eras. It is a magnificent caves system of cryptic paintings of great historical importance that has managed to elude understanding and has since its discovery been sealed off yet again, off-limits to most and keeping its secrets close as it always has.

One of the greatest archeological discoveries made in modern times happened quite by accident. On September 12, 1940, an 18-year-old Marcel Ravidat was out exploring in the countryside of southwestern France, near the village of Montignac in the Dordogne region, along with his faithful dog. It was a perfectly normal day until at some point the dog tumbled down a hole in the ground at a place called the hill of Lascaux. Ravidat would call some friends to come investigate the hole with him, as it seemed to lead off into the murk into a passageway, and their minds raced with the wonders that may lie down there in the clinging dark. They went about widening the hole until they were able to fit through, and armed with a makeshift lamp they penetrated into the gloom, where they would find an ancient world lost to mankind for millennia, long a stranger to the light, and which would become a mystery that has fascinated scientists to this day.

After descending through a 49ft deep shaft and squeezing through some very narrow passageways, the corridor emptied into a larger room that seemed mundane at first until the walls were licked by the flickering illumination of their lamp. There covering the walls and dancing about in the lamplight were myriad ancient paintings depicting various animals, humans, and more, as well as abstract symbols, all mostly in red, yellow, and black. Excited by this incredible new treasure they had found, the boys returned the following day and delved deeper into the complex to find other alcoves and chambers similarly adorned with these mysterious paintings, and that is when they would finally come out with their discovery and the real research on what would come to be known as the Lascaux Caves would begin in earnest. 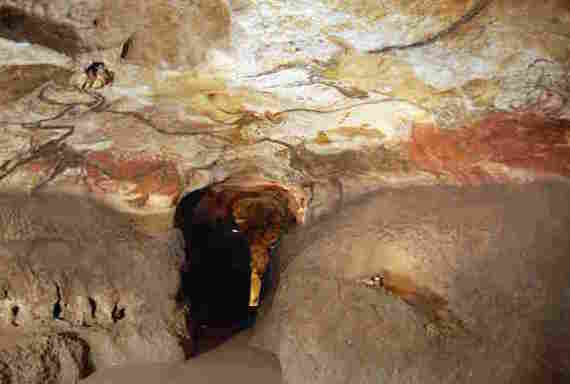 It was found that the mysterious cave system was divided into several main areas that between them held hundreds upon hundreds of ancient cave paintings depicting animals, including deer, aurochs, ibex, bison, deer, equines, birds, and feline species, as well as human figures, bears, lions, a rhinoceros, and abstract signs, yet none of trees, vegetation, or the landscape itself, and none of reindeer, odd because that is believed to have been the main source of food for the people who painted it all. Most of the animals seen were of species long extinct, belonging to the Upper Paleolithic era, and most can be identified, yet there are also some anomalies among them, such as a monstrous creature with panther skin, the tail of a deer, a bison’s hump, two horns, and a prominent male member. What was this thing? No one knows.

All of these figures are meticulously rendered in a variety of mineral pigments, with some amount of engraving directly into the stone also seen, all of it often incorporating the angles and curves of the walls themselves into the designs. The paintings in general show great skill and care in their creation, often exhibiting artistic skills and techniques far ahead of their time. Among the different sections of the caves are the so-called Hall of the Bulls, which shows various horses, stags, and bulls, including an immense, 17-foot-long image of a bull, as well as another section called the Nave, which holds painting referred to as "The Crossed Bison," which uses tricks of perspective that were very advanced for their era, and the Abside (Apse), a smallish chamber in which practically every inch is covered in thousands of entwined, overlapping, engraved drawings, and other sections with names like the Shaft of the Dead Man, the Chamber of Engravings, the Painted Gallery, the Chamber of Felines, and others. 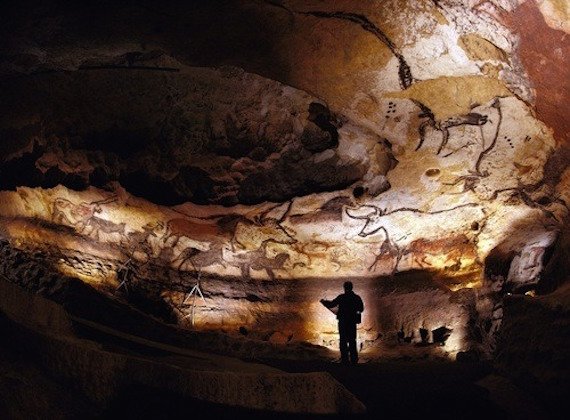 It is all rather breathtaking in its ambitious majesty, but it is also permeated with a great deal of mystery, and there is much we don’t know about this place. One thing that has never been agreed on is just how old the paintings actually are. From the species depicted and the various tools found scattered about it is believed that they date to between 17,300 to 20,000 years ago, but it is still debated as to exactly how old they really are. It is also not fully understood why the paintings were made in the first place. While there are other cave paintings to be found in the region, there is nothing approaching the grand scale of what can be seen in the Lascaux Caves, suggesting this place had some special significance among the people that made it, but just what this might be is unclear, with theories ranging from that this was a place for rituals to that it held some spiritual capacity. Making it all more impressive is that a main component in the pigments used are certain manganese oxides that do not exist in the immediate area, with the nearest source lying 250 kilometres away, meaning these artists went through great lengths to import these materials and then lock themselves deep underground with animal fat lamps to complete their work over the course of generations.

Another mystery still is that no one really knows what all of these paintings actually mean, and although some seem to tell a story and even continue on into other rooms, no one is quite sure what that story is or why it was recorded here in this manner. One idea is that these paintings tell spiritual stories or even creation myths, while another is that they are rituals to bring success in hunting, or another still that they are just hunting records or records of the wildlife of the area. No one really knows, and there are fewer and fewer opportunities to study these wonders because in modern times the caves are almost completely off limits to even scientists and researchers. 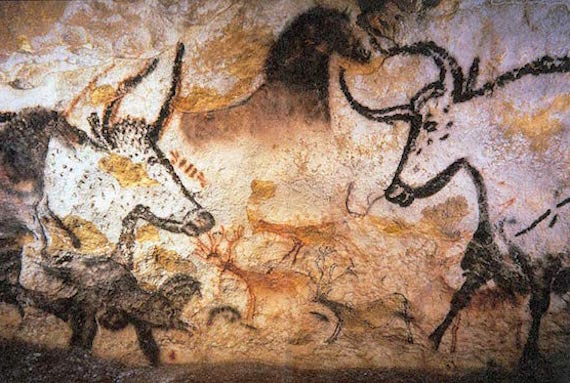 This wasn’t always the case. The caves were opened to the public in 1948, where they began to attract droves and droves of people coming to peer into this window to the past, but this unfortunately led to a change in the cool, dark atmosphere within the cave that began to seriously threaten the paintings. Factors such as carbon dioxide, heat, humidity, artificial lighting, changes in air circulation and temperature, and various contaminants conspired to lead to visible deterioration of the paintings that began to progress at an alarming rate. By the 1960s there were crystals, algae, and lichens appearing within the caves, and they were finally closed down to the public in 1963. This severely limited access to the caves, but things would get even worse still, when in 2000 a destructive white mold was found running amok here, and in 2007 a mysterious black fungus of an entirely new species never seen before began doing irreparable damage to the paintings, and in 2008 the caves were closed altogether for three months, with only a single person allowed in for 20 minutes at a time once a week to monitor the site and take readings.

Since then the fungus problem has been ongoing, and access is still extremely limited, meaning very few people have had the privilege of seeing these paintings up close. Even researchers and experts are only allowed very limited access to the caves at present, making study of the ancient treasures inside an agonizingly slow process. Tourists are able to see the paintings only through a replica cave called Lascaux II, created in 1983 only about 200 meters from the actual site, which holds recreations of certain sections of the real caves, and this is about as close as most people will ever get to seeing the real thing. It is somewhat sad to think that this piece of our past might forever be hidden away down in the earth like it did for millennia before its discovery, to keep its secrets that only the long dead know of. One can only hope that we find the answers we seek, but until then this remains a window to another era which was open to us for a time, but which has had the curtains pulled over it once again.