The Mysterious Haunted Scottish Island of the Merfolk

Nestled out among the rugged Orkney Islands off the north coast of mainland Scotland and surrounded by grey, tumultuous seas, is the tiny island of Eynhallow, known to the ancient Norsemen as Eyin Helga, or “The Holy Island.” The island itself is just a speck of rock really, sat between the much larger islands of Mainland Orkney and Rousay, measuring just 75 hectares (0.29 square miles) in area and just 40 feet above the waves, now uninhabited except by the flocks of seabirds for which is serves as a sanctuary in modern times. Other than some decrepit ruins of a 12th century church and the skeletal remnants of long abandoned houses, the barren, windswept slash of rocky, seaweed strewn land is rather unremarkable at first glance, and one could easily pass it right by without giving it much thought, but this tiny island has long been considered a magical, haunted place steeped in lore, myth, and mysterious history.

Even before humans ever lived here, Eynhallow was seen as a cursed place by the Norse, viewed as the hunting grounds of evil spirits called the sea trows, which would attack anyone foolish enough to try and step foot here, and which had the ability to shapeshift into the witness’s worst fear and to be able to make the entire island vanish to keep it from prying eyes. In later centuries the island became known as the summer home of the Finfolk, which were aquatic beings similar to the common image of merfolk. The Finfolk were renowned for their shapeshifting abilities and feared for their propensity for abducting humans throughout the Orkney Islands to be used as slaves and spouses, taking the form of other sea animals, fishermen, or even floating clumps of seaweed or other debris to lure their victims closer before lashing out to grab them and take them to their lair. These Finfolk were only able to come ashore in the summer time, and they did so at Eynhallow, their summer sanctuary, which was called the Hildaland (Hidden Land) and which they were able to make invisible from human eyes or to wreath in a mystical fog.

It was said that to approach Eynhallow was to court with certain disaster, as the Finfolk would either kidnap or kill trespassers, and the island was seen as a cursed, forbidden place to be avoided, patrolled by the Finfolk and protected by dark magic. That is, until the arrival of a local farmer called The Goodman of Thorodale. According to the tale, the farmer’s wife was chosen as a Finfolk mate and taken away against her will to Eynhallow, but he would not let it go that easily. The Goodman gathered up his sons and ventured out to the forbidden island, armed with both weapons and special charms to ward off the sorcery in place to protect it. Upon reaching the shore, the group went about performing a ritual that broke the spell the Finfolk had over the island and cast them out, and fighting off the ferocious Finfolk, finally making Eynhallow once again the rightful property of humans.

It was after this that a few people would begin trickling to make their meager homes here, and the chapel was erected here in the 12th century. Very little is actually known about the history of human habitation on the island other than that the stories and lore continued, with all kinds of rumors whispered among the people of the Orkney Islands that this was still a place of magic and menace. One account of this oddness comes from 1529 in the manuscript called Descriptio Insularum Orchadiarum, in which it is written of the eccentric Eynhallow:

It is of old times related that here, if the standing corn be cut down, after the setting of the sun, unexpectedly there is a flowing of blood from the stalks of the grain; also it is said that if a horse is fastened, after sun-down it will easily get loose and wander anywhere during the night.

The island remained an enigma, its history and reclusive people poorly understood and wrapped in riddles, its true past and origins almost totally contained within oral traditions that have long ago faded into the mists of time. It is known that by 1851 there were only a scant 26 people inhabiting this forsaken place, and that a mysterious unknown disease, possibly typhoid, hit here to send them fleeing, taking their traditions and oral history with them. The roofs of the houses were removed and the land cleansed as much as possible of the scourge of the plague, but the people never did come back, leaving nothing but mysteries in their wake. The island became a sea bird sanctuary, and now the land is silent except for the screeching of the birds, the barking of seals, the roar of the wind, and the relentless crash of the rough waves that lash the shores. 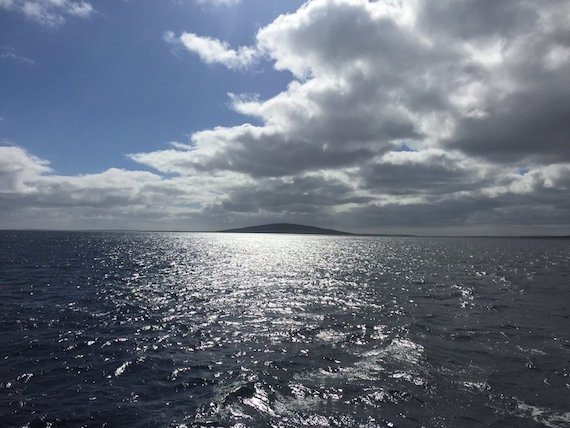 Eynhallow is an inscrutable fossil from another age. With no written history to speak of, we are left to wonder about this place so permeated in dark legends and myth, and there are many things we have yet to understand. Even the church on the island is of enigmatic origins, thought to possibly have been an early Christian monastery but largely wreathed in the unknown, its true nature only truly known by people who are long gone. The crumbling, feral overgrown ruins of the cottages similarly offer no clue as to who these people were or their way of life, and adding to it all is the presence of odd, imported red sandstone fragments scattered about the dwellings, the purpose of which we can only guess at. Indeed, much of the island remains not fully explored, with hints of buried prehistoric sites and ancient walls still buried here waiting to be discovered yet still untouched.

In present times the island remains little studied and nearly inaccessible. No ferry goes to the island, and while it is not closed to visitors the only way to really get there is to take a private boat through the notoriously treacherous tides and rough seas, or one of the once yearly tours offered in July by the Orkney Heritage Society. Even in this modern age this is an island that has remained wreathed in mystery and unsolved conundrums, and it lives on in the legends of the area. In many ways, whether the legends are true or not, this place remains the Hildaland, the secret lair of the Finfolk.