The Mysterious Monster of Lake Ontario

Among the Great Lakes of North America is the majestic Lake Ontario, which while having the smallest surface area among its four brethren is still a mighty large lake, sprawled out over 7,340 sq. miles and possessing 712 miles of shoreline. With such a large lake, one might wonder if there are any mysteries to be had here, and indeed there are. One of the most interesting of these is the lake monster that has long been reported from Lake Ontario’s depths, and while not nearly as well known as some other lake monsters of the world such as Champ or Nessie, it still has managed to capture the imagination.

Tales of something very large and mysterious in Lake Ontario’s waters go back centuries, all the way back to the original inhabitants of this land, the Seneca tribe, who told of a water dragon lurking here that they called the Gaasyendietha, and the area’s Algonquin people had very similar legends. Yet far from just myths and folklore by the areas's indigenous people, when European explorers and settlers began trickling into the region they too began to make sightings of some massive creature in the lake, with one of the first of these being noted in the journal of French explorer Jacques Cartier, describing a monstrous “finned snake” that moved "like a caterpillar" before diving down beneath the waves to disappear. The French explorer Pierre Radisson also made note of gigantic snakes living in the lake.

In the 1800s there were quite a few sightings of the creature in Lake Ontario, starting in 1805, when four fishermen near the area of Kingston, on the eastern shore, saw what they took to be an overturned rowboat bobbing about out on the lake. This “rowboat” then began ominously moving towards them, and as it grew closer they could see that this was just a part of a much larger, serpentine creature with huge eyes that they estimated as being an absurd 150 feet in length, as big around as a barrel, and with a mouth “frightfully large and aspect terrible.” Kingston would go on to become ground zero for all manner of other such reports, and gathered quite a reputation as being a favorite haunt for the mysterious monster.

In July of 1817, a ship was in the area when the crew spotted a dark-colored snake-like monster measuring 40 feet long and 1 foot in diameter about 3 miles offshore. In the August 14, 1829 edition of the Kingston Gazette and Religious Advocate there was also the account of a group of children playing by the waterside when they saw a serpent in the water around 30 feet in length, described in the article as “a hideous water snake, or serpent, of prodigious dimensions.” In 1833 the steamer Polyphemus also came across the beast in Kingston Harbor with the crew saying it was 175 feet in length. The captain, Abijah Kellogg, would claim that it looked almost like an earthworm, with no discernible face, and that it was making its way up the St. Lawrence River. The creature popped up again in 1842, at Gull Beach, in Kingston, where it startled two boys at the water’s edge. When they told their father what they had seen he came running with a rifle, and even fired at the 40 foot long, brownish serpent. Sightings continued all around Lake Ontario at the time, and there was a curious account printed in the Galveston Daily News, September 5, 1867, the entirety of which reads:

Another report of the appearance of the great snake or water monster in Lake Ontario has reached us. We have it from reliable citizens who reside on the Lake shore in Parma [New York], ten miles or so west of the mouth of the Genesee, that on Thursday last [possibly August 29] , just as sunset, this monster was seen in the water close to shore. A drove of cattle went to drink, whereupon the huge monster raised his head above the water and approached the shore, intending no doubt to take an evening meal of fresh beef. The noise made by the animal as he came into shallow water frightened the cattle and they ran back from the beach in great fright. Half an hour later the same drove of cattle sought to drink at a place fifty rods west of the spot where they first went and were again driven away by the monster. The occurrence drew to the beach several persons residing not far distant and caused a sensation. It won’t answer for anybody to go into that neighborhood and say that there is not a monster in the lake. Too many have seen the animal to doubt its existence. 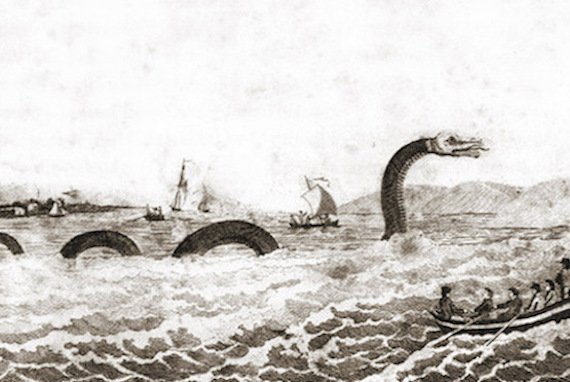 Sightings would continue on into later years. On June 25, 1872, witnesses in Olcott, New York, supposedly saw the monster actually spectacularly leap far out of the water while making a strange bellowing noise. Two fishermen also saw it in 1877 in Burlington Bay, described as looking like a log with a mouth like a crocodile. In 1881 the creature returned to Kingston, this time being seen by the passengers and crew of the steamship Gyspy, this time describing it as having a tail and small legs. In August of 1882 it was seen near Fort York, Toronto, and witnesses said it was bluish grey in color and covered in prominent bristles. On this occasion it was reported to be leisurely floating about basking in the sun, but when it realized it was being watched it apparently grunted and quickly slipped back down into the depths.

In 1888 some sailors saw the thing in the channel between Wolfe and Simcoe Islands, and in 1892 there was a harrowing report from a couple who claimed to have actually been attacked by “a huge serpent with eyes like balls of fire” during a fishing trip to Brackey's Bay, only managing to escape by beating it over the head with their fishing poles. Perhaps one of the most dramatic reports was printed in the September 5, 1897 edition of the Buffalo Morning Express and Illustrated Buffalo Express, in which it was reported that the creature had actually been captured on hook and line after putting up a seven day battle just off of Tompkins Point. The paper describes the outlandish creature as follows:

Rope were pro cured and the monster was hauled upon the shore. The leviathan was the queerest thing ever teen' along Lake Ontario. It measured from end of nose to tip of tail seventeen feet, four and a halt Inches, while In width it measured six feet, four Inches.The body was encased In a shell that was very soft and pliable. When hauled upon the platform scales upon which coal is weighed It tipped the beam at 443 pounds. By pulling upon the hook, which was securely fastened in the lower jaw of the monster, the head was drawn out about three feet, displaying a most wonderful sight .As the head was drawn out farther and farther, the jaws would open wider and wider and the eyes would protrude dots and more. When the bead was drawn- out U full length the eyes protruded sins inches and, being seven inches In diameter, made an extremely ugly sight, The tail was about four feet in length- and was feather shaped. About two thirds back on the body was a hump about 18 inches high, which when brushed off with an old broom, shone like polished brass. On either side of the body of the monster were six fins or flippers, each 32 inches long and armed with claws seven inches in length. Sightseers have driven from a distance of ten miles to see the monster. Dr. Dee Borough has had it skinned and will bare it mounted. 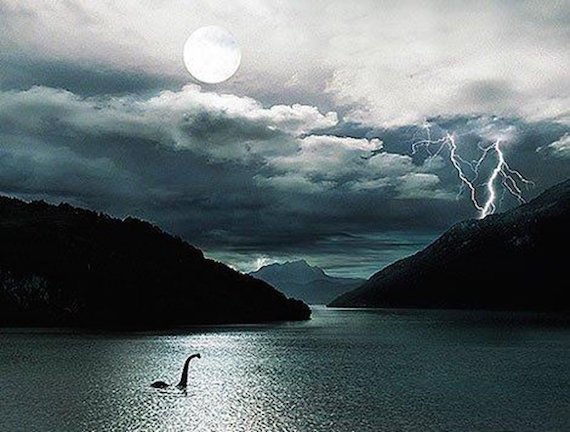 Whether this ever really happened or not, it is the last we hear of this particular specimen, and no mention of any mounted specimen is made after that. Was this real, and if so what happened to that body? Who knows? Unfortunately, this could very well be just a hoax report from an era when newspaper reports were often exaggerated or even straight up made up, and there were certainly hoaxes of the Lake Ontario Monster that would pop up. Sightings nevertheless continued. In 1931 two doctors were out boating on the lake when they saw a 230-foot-long serpent with “one eye in the middle of his head as well two antler-like horns.” In 1934, a group of boaters claimed to have actually collided with the monster at Cartwright Bay, near Kingston, and although they claimed that this had killed it the body was never found. Even more recently still is a sighting made in 1968 by a local in New York who said it was an eel-like creature 20 feet long and had a mane, and in 1970 it was spotted by an employee of the Ministry of Natural Resources at the shores of Prince Edward County. The most recent account I can find is from a Reddit commenter called “jvantorre,” who says he saw it in 2011 in Toronto Harbor, explaining:

Hi me and my friends were at a concert last night September 5th 2011 at the Toronto docks. Out I'n the water we seen a creature describing all of these descriptions. It was black maybe 2 ft wide and only slithered York the surface never jumped but came up enough to expose it's large fin. I seen it three times I'n roughly 30 min and my friend seen it twice. Before we had to go into the concert. At first we thought there might be a possibility of fresh water dolphins but no sightings have been recorded.

It is hard to say exactly what the mysterious lake monster of Ontario could be. There are species of eel in the lake, but they get nowhere near the sizes reported. Lake sturgeon are also known in the lake, but they are very rare nowadays, and also don't get as large as the accounts, although they do get pretty big. Could this be something else entirely? Perhaps something that long ago got trapped in the lake? There's no way to really know, and sightings in more modern times have dropped of substantially, leaving the mystery of the Lake Ontario monster a strange oddity.