The Mysterious Tale of a French Spy Who Could Eat Anything

History is populated with mysterious people we know little about. These individuals remain denizens of an unknown, murky realm through which we have only fleeting glimpses into their lives, to leave us perplexed and forever denied the full answers we seek. One such person was a remarkable man who lived in France in the 18th century, and who was an anomaly of nature that would baffle top physicians and who we still don’t fully understand to this day.

The human oddity known only as Tarrare was born in 1772 in Lyon, France as a normal baby in every way, at least by all appearances, but this would begin to change as the boy grew. He began to display an incredibly ravenous, insatiable appetite, stuffing anything he could get his hands on down his throat, and no matter how much he ate he was never satisfied, constantly gorging himself on anything and everything, always hungry and always looking for food, allegedly eating his own body weight every day. Oddly, although he ate prodigious amounts of food he never gained any weight, and he was actually rather diminutive for his age, indeed weighing only 100 pounds when he was 17. He also displayed some rather odd physical attributes that aided him in his perpetual eating binge, such as a belly that could distend to an inhuman degree, hanging down in vast folds when not full, and deformed jaws that could open far wider than a normal man, revealing a cavernous maw past his lipless mouth that almost seemed to have evolved to accommodate his ferocious appetite. Such was this appetite that his rather poor parents were unable to continue feeding him, and he was kicked out of his home as a mere teenager. And so the adventure of the mysterious Tarrare would begin. 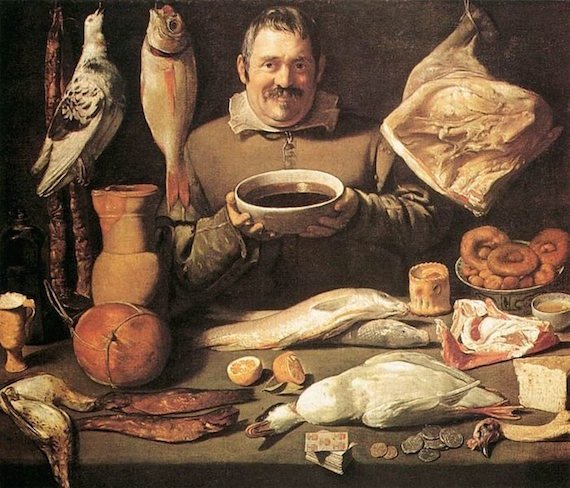 Tarrare fell in with a rather odd crowd right away, finding a home with a travelling band of misfits, freaks, and prostitutes who toured around France putting on shows and robbing people where they could. Tarrare would become one of their main attractions, devouring all manner of things for the macabre, twisted curiosity of the crowds, constantly upping the stakes and pushing the limits of his ability. It is said he would swallow whole bushels of apples whole, dozens of eggs at a time, and would eat nontraditional things such as corks, stones, pieces of wood, and jewelry, as well as even live animals such as cats, dogs, and squirming eels or snakes, much to the fascinated disgust of the throngs of people who watched him. Indeed, by all accounts Tarrare was generally just rather disgusting to be around at the best of times, constantly producing odoriferous burps and farts, and always covered in a sheen of sweat and surrounded by a cloud of stench that was once described as “fetid beyond all conception.”

He would eventually fall out with his carnival crew and go off to perform several odd jobs before finding his way to Paris in order to start his own solo act to try and capitalize on his special “gift.” When war came to the land in the form of the French War of the First Coalition, Tarrare went off to fight for his country and his freakish appetite would follow him. The rations they gave soldiers were not nearly enough to satiate him, and Tarrare found himself doing favors and odd jobs for soldiers in return for extra rations, and he would also raid the garbage and eat even the most rancid rotting food. He also took to stealing food when he had to, and even when his rations were increased he was not able to function normally, actually displaying signs of weight loss and undernourishment despite the eating, and he was admitted to a military hospital where he would be studied further to the bafflement of every medical professional who saw him.

Under hospital care Tarrare would be studied by two surgeons named Dr. Courville and Dr. Pierre-François Percy, who found him to be completely sane, albeit constantly in a state of desperate hunger and subsequent irritation. Fascinated, they made note of many of his physical oddities, such as his freakishly wide jaw, the jowls that hung “like elephant ears” when not stuffed with food, the loose skin of the belly that could practically be tied around his waist like a belt, and other anomalies such as constantly blood shot eyes, a body temperature higher than normal, and that stench that exuded from his body, of which Percy would say, “He often stank to such a degree that he could not be endured within the distance of twenty paces.” The curious doctors tried testing the limits of Tarrare’s appetite and found there were none, that he could keep on eating indefinitely and consume almost anything, passing it through his system in epic defecations just as fast as he could take it in. They also did experiments wherein he would eat various small animals whole, later regurgitating the fur and bones. Perplexed, Percy would say of Tarrare:

Let a person imagine all that domestic or wild animals, the most filthy and ravenous, are capable of devouring, and they may form some idea of the appetite, as well as the wants of Tarrare. 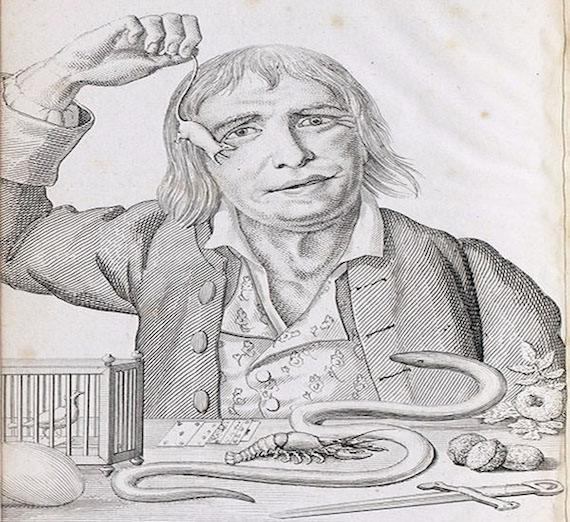 These tests and experiments went on for several months, and the military started getting the idea that they could somehow use Tarrare’s strange powers against the enemy. The plan they came up with was perhaps as completely absurd as you might imagine. Tarrare was given a small wooden box holding within it a secret message to be delivered behind enemy lines to a French colonel who was being held by the Prussians. The idea was that Tarrare would swallow the box whole, then pass it in a bowel movement and the paper would be retrieved from the box. Indeed, before the mission they had even tested this out and it had worked wonderfully, the paper still untouched and completely legible after its journey through Tarrare’s digestive tract, so there was every reason to believe the crazy plan would work. Unfortunately, a man who ravenously and uncontrollably eats anything within reach, looks and smells like a freakish ghoul, and speaks not a word of German does not exactly blend in, and he was almost immediately captured by the enemy.

Amazingly, after a little torture and imprisonment the enemy let him go after he told them about the secret message, and Tarrare made his way back to France. Luckily for the French, the note had only been a test, merely asking the recipient to note whether it had gone through successfully, much to the frustration of the Prussians, and so he did not really face any disciplinary action or consequences. In the meantime, Dr. Percy began trying to see if the tormented man could somehow be cured of his odd affliction. To this end, Tarrare was subjected to all manner of treatments, including every known appetite medication, as well as more unorthodox approaches such as vinegar, tobacco pills, and even drugs such as laudanum opiates, but nothing worked. His unearthly appetite remained unchanged, and he would wander the hospital eating garbage, bandages or other supplies, and was even found drinking blood that had been removed from patients and munching on cadavers at the morgue. When a baby went missing, suspicions fell on Tarrare, and although he adamantly denied this he was kicked out in 1794, finding himself now homeless on the streets of Paris, prowling the gutters and garbage dumps in search of food, stuck in a hell he could not escape. 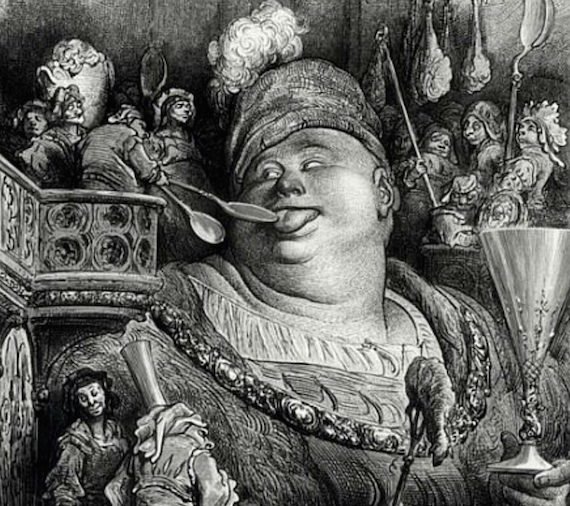 In 1798, Tarrare fell ill with a case of tuberculosis, and as fate would have it he came once again under the care of Dr. Percy. Tarrare would tragically pass away less than a month later, upon which the medical community was eager to do an autopsy on this curiosity. However, rather bizarrely Tarrare’s corpse began to decompose at an enhanced rate for reasons unknown, and the autopsy was carried out with great haste. The London Medical and Physical Journal would write of the autopsy in vividly horrific detail, saying:

His body, as soon as he was dead, became a prey to a horrible corruption. The entrails were putrefied, confounded together, and immersed in pus; the liver was excessively large, void of consistence, and in a putrescent state; the gall-bladder was of considerable magnitude; the stomach, in a lax state, and having ulcerated patches dispersed about it, covered almost the whole of the abdominal region. A cylinder of a foot in circumference could be introduced into the mouth without touching the palate.

The stomach was abnormally large, the jaw able to open beyond normal human limits, the esophagus wider than any known man, and it was all rather the medical puzzle, being published in such respectable journals as The Study of Medicine, Popular Physiology, and the London Medical and Physical Journal. Unfortunately, this was about all they learned from Tarrare’s body, as the putrefication and stench became so unbearable that further studies were aborted, leaving the true nature of his condition lost to history. Since we don’t really know for sure, there have been many theories surrounding what might have been wrong with the mysterious Tarrare, including that it was caused by a brain or thyroid abnormality, brain damage, some sort of intestinal parasite like a hookworm or roundworm, a condition known as Prader-Willi syndrome, which causes iron deficiencies and an extreme urge to eat even traditionally non-edible items, the influence of some sort of unknown environmental condition, or a combination of any of the above. Wherever the answers may lie, we will probably never know for sure, and the case of the mysterious Tarrare remains a curious historical enigma and medical marvel.