The Mystery of the Three-Toed Bigfoot

Fifteen-year-old Doris Harrison got the fright of her life in July 1972 as she stood in the kitchen of her family home at the foot of Marzolf Hill in the tiny town of Louisiana, Missouri. When she last checked, her brothers Terry, 8, and Wally, 5, were chasing their dog through the trees, but sudden screams brought Doris’s attention to the window. A bipedal monster about seven feet tall covered in hair stood at the edge of the yard as her brothers ran toward the house. The creature, its face obscured, held a dead dog under its arm.

"It wasn't a man and it wasn't a bear," Doris (Harrison) Bliss told the Columbia Missourian in 2012, the 40th anniversary of the encounter.

That was the first sighting that summer of the beast that would be dubbed Momo, the Missouri Monster. It wasn’t the last.

A man said he was chased by the creature. School children claimed to have seen it outside their classroom window. And two women said they saw a half-ape/half-man that smelled like a skunk staring at them from the woods.

The most curious detail to any description of Momo was its feet. It only had three toes. Local man, Clyde Penrod, made plaster casts of the prints.

"It's not human at all," Penrod’s daughter, Christina Windmiller told the Columbia Missourian. "It has a big heel and three toes."

Although the sightings trickled to a stop after a couple of weeks, one imprint Momo left on the field of cryptozoology is those toes. Most Bigfoot prints have five toes (sometimes four) and, although the big hairy beast is often referred to as a North American Ape, its feet don’t resemble an ape’s with a thumb-like toe on the side. The prints appear human – just big.

However, Momo isn’t alone. There are more reports of Bigfoot tracks with three toes. 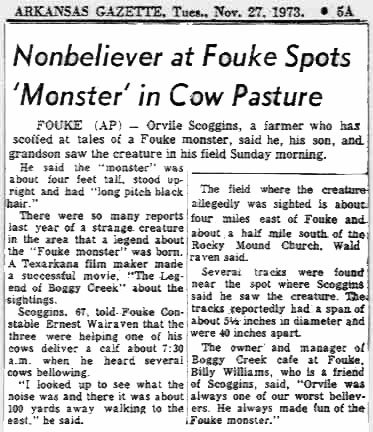 In the early 1970s, while Momo was stomping around Missouri, an identical monster appeared one state down, in Miller County, Arkansas. From 1971 to 1974, the Fouke Monster, a seven-foot-tall hairy, human-like creature that smelled like skunk and rotting flesh, was reportedly seen in southwestern Arkansas.

The Fouke Monster was first reported to the local newspaper when Bobby and Elizabeth Ford claimed the creature reached through a screen window of their home the night of May 2, 1971, per the Texarkana Gazette. Bobby and his brother Don chased the monster away, shooting at it in the darkness.

Along with the shredded screen and scratch marks on the siding, the beast left three-toed footprints around the house. The monster, and his strange feet, terrorized the Fords for days.

Locals claimed to have seen the ape-like monster often in the area. Local gas station owner Scott Keith discovered more footprints in a soybean field – these also had three toes.

Retired air traffic controller Harlan Ford was the first to report the monster in 1963. He also claimed to have found three-toed prints of the beast in 1974. Another local man, Ted Williams (not the baseball player), also said he saw the swamp monster.

Sightings of a seven-foot-tall Bigfoot that leaves three-toed prints have also been reported in Iowa (prints left by a hairy creature in 1978), and Minnesota (prints found on the Vergas Trail east of Fargo in 1989). The question is, if this hairy, man-like creature has three-toed feet, what exactly is the Bigfoot that roams a corridor down the center of the United States?

People have speculated Bigfoot is anything from the ten-foot-tall Pleistocene Asian ape Gigantopithecus, to remnant Neanderthals, to misidentified bears, to at least one claim that it is Cain of the Bible. None of these guesses explain why some Bigfoot – which appear to be mammals – may have only three toes on each foot.

There are only three mammals with three-toed hind limbs. The rock hyrax (a twenty-inch-long native of Africa and the Middle East), the guinea pig (an eight-inch-long rodent native to South America) and the sloth (a thirty-inch tree-dwelling mammal native to Latin America).

Of these, only the sloth has placed any foot in Bigfoot circles.

The giant ground sloth (Megatherium), that’s range stretched from South America to northern Canada during the Pleistocene Era, weighed as much as four tons and grew to twenty feet in length. It was an omnivore (as Bigfoot is purported to be) and could move on two legs as well as four. And, of course, it had three toes.

Could the giant ground sloth have survived in the unknown corners of the Americas for the past 11,000 years? According to native legends, yes.

The Mapinguaris is a creature villagers in the Brazilian rainforest claim to have encountered as recently as the 1990s. It is around seven feet tall, covered in reddish-to-black fur, stands on its hind legs, is omnivorous, and smells like rotting flesh. Ornithologist David Oren has gone as far as proposing the Mapinguaris may be a living giant ground sloth.

A similar creature lives in the legends of the Inuit peoples of Canada’s Yukon Territory. The Saytoechin is a creature larger than a grizzly bear that feeds on tree bark and beavers.

An Inuit family fishing at Tatchun Lake in central Yukon in the mid-1980s witnessed an animal “eight or nine feet high, bigger than a grizzly bear … coming towards them,” per the British Columbia Scientific Cryptozoology Club. When the family was shown pictures to identify the creature, they pointed to drawings of a giant ground sloth.

Could this creature, thought dead for 11,000 years, be responsible for three-toed Bigfoot reports through the center of the United States? Maybe. In the field of cryptozoology, you never know what’s out there.