The Sinister Pele’s Curse of Hawaii

One enduring feature of Hawaiian mythology is that of the goddess Pelehonuamea, also known simply as Pele, who is the mistress of volcanoes and the very fire and magma that created the islands. She is by all account s vengeful and jealous goddess, who watchfully guards her land and supposedly makes sure that those who would steal from the islands pay for it. This seems to have morphed into a pervasive legend that if someone is to take even a single rock or grain of sand from one of the island’s volcanic national parks, then they will incur the wrath of the fire goddess and be cursed with all manner of misfortune and strife.

Stories of this insidious curse taking effect are numerous. One well-known account appeared in The Los Angeles Times with a witness named Timothy Murray, who visited Hawaii Volcanoes National Park and took as a souvenir a bottle of volcanic sand home with him. According to Murray, his life began to totally unravel not long after that. First he didn’t get a job he had been applying for, his beloved dog died, then the girl he had been dating for 5 years dumped him, he spiraled into alcoholism, and to top it all off the FBI arrested him in a computer copyright infringement case. Murray would say, “My life literally fell apart.” Things got so bad that he went back to the exact place where he had taken the sand and as soon as it was returned he says that he had a complete reversal of bad fortune and that his life got better again.

A similar account comes from a man named Steve Pariseau, who also visited Hawaii Volcanoes National Park and took home with him a sliver of black volcanic rock while on vacation. He was allegedly immediately met with a deluge of woes, with his mother dying, his son coming down with a previously nonexistent behavioral problem, his marriage disintegrating, and others. He had not even heard of the “curse” at the time, but when it came to his attention he promptly returned the rock and all of the bad luck evaporated. He would get married again, his son got better, and he says of the curse and his decision to return the rock, “I feel kind of silly. But seeing is believing.”

Word of these sorts of stories and many more like them has gotten around, and more and more people who have been experiencing problems in their lives have also come to realize that it all started when they took rocks or sand from the volcanoes of Hawaii. Because of this, each year the Hawaii postal service and National Park Service, and even Hawaiian Airlines have been flooded with an insane amount of shipments of lava, volcanic rocks, and sand from all over the world from people who have taken it while on vacation and want to get it off of their hands for fear of the curse. Many of them come with notes of apology attached, such as one which reads:

Please take this sand and put it back somewhere on your island. I’ve had very bad luck since it came into my life and I am very sorry I took it. Please forgive me and I pray that once I send it back where it comes from, my bad luck will go away.

There are apparently over 100 rocks a month sent back in this manner, often at great expense, and many people go the extra mile to make sure they return the stones and sand by hand. As for the ones that get received in the mail, most of them will never be returned to where they were taken from. For the most part the National Park Service just sanitizes them and then places them in from of visitor centers, unsure of which crater they came from or even if they even originated in Hawaii at all. Some of the items aren’t even rocks or stones at all, and one park official has said:

Every single day, we get boxes of them and envelopes filled with rock sand, even items that aren't natural like plastic ashtrays that might be in the shape of Pele that they've purchased at some, you know, tourist trinket shop. To us it’s funny, but to them it’s real. 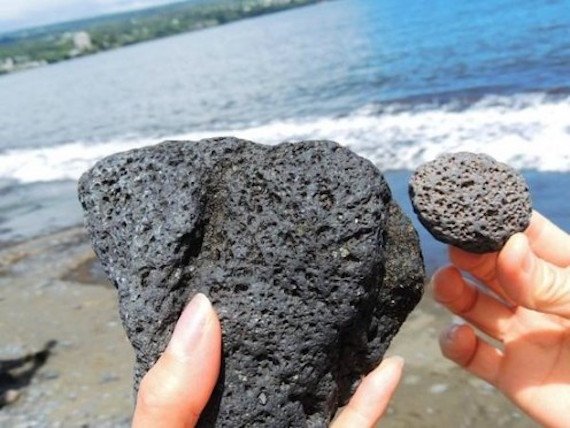 It is interesting that while many of these people seriously seem to believe that they have become the target of vengeful forces from beyond our understanding, there has been some doubt cast on the origins of this myth of a Pele curse. Although it is unclear just when this belief started, it has been claimed that it is purely a 20th century construct, started when some park rangers made up the tale of the curse to keep people from constantly stealing stones and sand. It has even been suggested that the tale is ethnically insensitive and feeding into Hawaiian stereotypes, and it has also been pointed out that actual Hawaiian folklore makes no mention of Pele vowing to curse those who take these things from her. Yet then there are locals who say that there is cause to believe in these mystical forces, and that it is represented in local lore, with one official from Haleakala National Park explaining:

The view may be rooted in the Native Hawaiian belief that plants, animals and rocks are imbued with spiritual significance. Hawaiian culture teaches that nature is the physical manifestation of Hawaiian gods and goddesses. The Hawaiian value of malama ‘āina (caring for the land) is connected to this belief and promotes respect of the natural world. Pohaku (stones) are considered as much of the conscious universe as any other part of the Hawaiian universe would be. So you wouldn’t be messing with stones unless you had a real good reason to do so.

So is this curse just a figment of the imagination or a construct of those who wish to protect this land? What are we to make of the numerous complaints of bad things happening to those who steal these rocks? Is it all just an urban legend and exaggeration? No one really knows, but the next time you are in Hawaii and see some cool-looking piece of rock, just leave it lie. It is better to ere on the side of safety. Just in case.

Life Could Have Existed On Mars Before It Did On Earth