The Strange Desert Anomaly of Africa

Out among the vast emptiness of the Sahara Desert, on Adrar Plateau right outside of the remote town of Ouadane, Mauritania, in Northern Africa, is a wonder that has captured the imagination for years and one of the most fascinating geological anomalies on the entire continent. Here etched within the ancient earth of these parched badlands in the middle of nowhere is an enormous, circular expanse of rock measuring approximately 30 miles across, with smaller circles within it reminiscent of a bulls-eye, and which has managed to defy any easy explanations as to its origins and is still debated.

Called the Richat Structure, or also the Guelb er Richât, the "Eye of Africa,” “The Big Blue Eye of Africa,” and "Eye of the Sahara," it was long recognized as an unusual structure due to its high-relief circular cuestas, circular irregularities such as circular distribution of ridges, valleys, and dikes, as well as it hydro-thermal features, remarkable flatness, and unusual geological structure, but no one really realized just how unusual it was until it was seen from up above in space, such is its utter vastness. When the Gemini IV mission was launched in the 1960s to orbit and observe the earth for four days, one of the astronauts’ missions was to be on the lookout for any sort of evidence of large impact structures where ancient heavenly bodies may have collided with earth. They found what they thought was one of these with the Richat Structure, which from the vantage point of so high above the earth proved to be far larger and more perfectly rounded that anyone had previously ever been aware of. Indeed, it is so distinctive and massive that it is still used as a landmark for astronauts to this day.

Considering the sheer size of the feature and its near perfect circularity, it was assumed that it had to be an impact structure from some ancient meteor strike, but more careful analysis showed that this was not the case. There turned out to be no evidence of the shock of impact or melted rock that should have been expected of such a site, and this left scientists scratching their heads. After all, what else could have possibly created such an amazing immense circle out in the middle of nowhere surrounded by flat nothingness? When word got out about this place there were all sorts of theories flying about, from that it was some previously unknown geological anomaly to that it was the work of aliens or ancient astronauts, but no one had the faintest idea and we still don’t really even know for sure.

The most commonly accepted modern scientific theory as to the origins of the Richat Structure is that it is the result of the gradual erosion of a gigantic geological dome of the earth’s crust that collapsed perhaps due to an eruption around 100 million years ago. It is believed that over countless millennia the layers of the dome were eroded and blasted away by the elements to leave behind these circular formations of rock that wildly varies in age from the Late Proterozoic eon (2500 to 541 million years ago) to the Ordovician Period (485.4 to 443.8 million years ago). However, even this theory is not universally agreed upon, and there are many mysteries left unanswered. 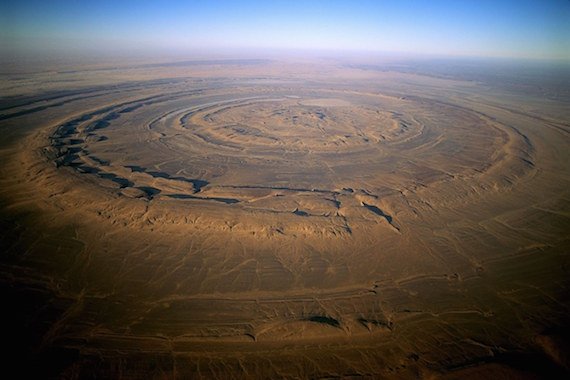 With all of the uncertainty of the geological history of this place and its air of mystery it is perhaps not surprising that there is a lot of discussion of other possibilities as well, some of them decidedly more fringe. One idea is that the Richat Structure bears a remarkable resemblance to Plato’s representation of the Lost Continent of Atlantis, which he envisioned in 360 BC as being composed of concentric rings of water and land. He also said that Atlantis had been lost in a cataclysmic event cut off from the world by “an impossible barrier of mud to voyagers sailing from hence to any part of the ocean.” He also makes mention of a “great plain to the south,” a “mountain sheltering the city,” which could refer to the high, mountainous ridge to the north of the site, and other little clues that have led some to believe that the Richat Structure is the actual remains of Atlantis, not totally outlandish because the sea would have once covered the area, but this is rather blunted by the fact that there has as of yet been found absolutely no sign of permanent habitation within it.

In the end we are left with questions and few concrete answers. What is the Richat Structure? That seems to depend a lot on who you ask. For some it is a mystifying geological anomaly. For others it is an alien structure, and for others still it is the site of the lost Atlantis. No one really seems to completely know for sure. For now this magnificent, enormous feature of the landscape sits out there carved into the otherwise desolate, monotonous features of this windblasted remote land, creating mysteries as it has always done for millions of years and may always do for millions more.

Scientists are Asking the Public How to Respond to Extraterrestrials