“Lightning never strikes twice,” or so the old saying goes.

This famous phrase is attributed to P. Hamilton Myers, who is believed to have been the first to use it in his book Thrilling Adventures of the Prisoner of the Border, where the character Harry Vrail says, “Lightning never strikes twice in the same place, nor cannon balls either, I presume."

Such might be said for cannon fire, but it certainly should be amended with respect to lightning strikes, since there is a wealth of information pertaining to individuals that have become victims of multiple lightning strikes over the course of their lives.

Perhaps the most famous example is Roy Sullivan, whose close encounters with lighting over the years landed him in the Guinness Book of World Records. Sullivan, a park ranger stationed in the Shenandoah National Park in Virginia, was struck a total of seven times between 1942 and 1977, earning him the nickname “the human lightning rod.” 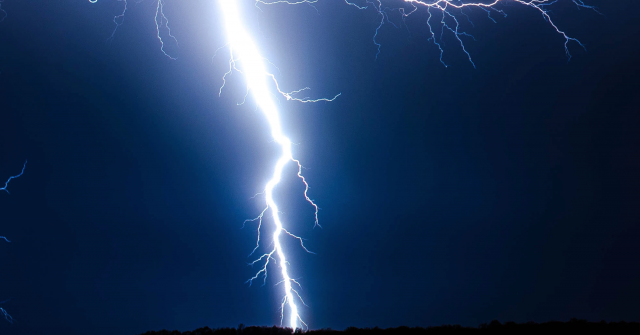 While lighting does in fact strike twice on occasion, as Roy Sullivan’s story shows, it certainly isn’t a common occurrence. However, while multiple lightning strikes are in themselves a curiosity, of greater interest are the effects that many lightning strike survivors have claimed to have manifest after their brushes with death.

Take for instance 62-year-old Edwin E. Robinson, who had lost his vision after his eyes were damaged in a car accident. Sometime later, it would seem Robinson’s luck hadn’t improved after he also became the victim of a lightning strike.  However, as he recovered from the strike he was amazed to find that his vision had been restored; in addition to the restoration of his sight, Robinson also claimed that his hearing had been improved following the potentially deadly lightning strike.

Similar post-strike changes have been reported in other cases too, like that of an electrician in Lawson, Missouri named Harold Deal.

Deal, who was 31 at the time, worked as an electrical contractor, and on one occasion while driving home he encountered a heavy thunderstorm. Fortunately, he made it home without incident; however, as he parked his truck and started his way up toward the house, his luck changed.

"As I started up the drive, I took about three or four steps, and then it was as though I had stepped into a very soft cotton ball,” Deal recalled. “My whole body felt as if my head was behind my shoulders and being pulled down between my shoulder blades.”

He didn’t specifically recall what the strike actually felt like, although once he regained consciousness, he found himself on the other side of his neighbor’s fence, a good 50 feet from where he last recalled walking. His boots had been knocked off by the force of the lightning when it struck, and all the metal on his person, right down to his belt buckle and the loose change in his pocket, had been melted; yet miraculously, he survived.

Deal’s tolerance to in climate weather would amaze his coworkers when they were working outside, since even when temperatures dropped into the 20s, he never wore a hat or coat. His unique ordeal garnered the attention of the media too: he was often asked to pose for photographs in the snow wearing summertime apparel like shorts and t-shirts. Deal even went on to become the Publicity Director for Lightning Strike and Electrical Shock Survivors International, which as the name entails, was formed to raise awareness and provide support for victims of lightning strikes.

Despite the unusual abilities some have claimed they developed after lightning strikes, these are far less common among the effects of such strikes, which are often deadly. In the United States, as many as 300 people are killed by lightning strikes annually, with injuries running as high as 1,500 in years past. Lightning is also the instigator of thousands of forest fires every year in America alone.

So maybe it’s time to amend P. Hamilton Myers’ most famous and enduring quote: it would be more accurate if it read something like, “Lightning (almost) never strikes twice… but when it does, things can get weird.”