A Close Encounter of the Sea Serpent Kind

Henry Lee, a dedicated seeker of sea serpents in the 19th century, reported on one of the most fascinating and credible encounters with an unknown leviathan of the deep. He said: “In the Times of the 9th of October, 1848, appeared a paragraph stating that a sea-serpent had been met with by the Daedalus frigate, on her homeward voyage from the East Indies. The Admiralty immediately inquired of her commander, Captain M’Quhae, as to the truth of the report; and his official reply, addressed to Admiral Sir W. H. Gage, G.C.H., Devonport, was printed in the Times of the 13th of October, 1848." Captain M’Quhae’s account makes for amazing and jaw-dropping reading:

“H.M.S. Daedalus, Hamoaze, October 11th, 1848. “SIR - In reply to your letter of this date, requiring information as to the truth of the statement published in the Times newspaper, of a sea-serpent of extraordinary dimensions having been seen from H.M.S. Daedalus, under my command, on her passage from the East Indies, I have the honor to acquaint you, for the information of my Lords Commissioners of the Admiralty, that at 5 o’clock P.m. on the 6th of Aug. last, in lat. 24’ 44’ S. and long. 9’22 E’, the weather dark and cloudy, wind fresh from the N.W. with a long ocean swell from the W., the ship on the port tack, head being N.E. by N., something very unusual was seen by Mr. Sartoris, midshipman, rapidly approaching the ship from before the beam.

“The circumstance was immediately reported by him to the officer of the watch, Lieut. Edgar Drummond, with whom and Mr. Wm. Barrett, the Master, I was at the time walking the quarter-deck. The ship’s company were at supper. On our attention being called to the object it was discovered to be an enormous serpent, with head and shoulders kept about four feet constantly above the surface of the, sea, and, as nearly as we could approximate by comparing it with the length of what our main topsail yard would show in the water, there was at the very least sixty feet of the animal afleur d’eau, no portion of which was, to our perception, used in propelling it through the water, either by vertical or horizontal undulation. 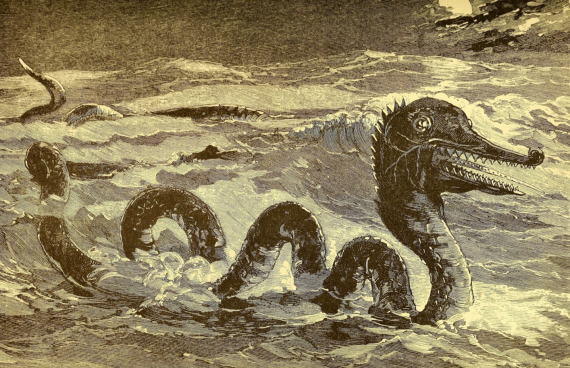 “It passed rapidly, but so close under our lee quarter that had it been a man of my acquaintance I should easily have recognized his features with the naked eye; and it did not, either in approaching the ship or after it had passed our wake, deviate in the slightest degree from its course to the S.W., which it held on at the pace of from twelve to fifteen miles per hour, apparently on some determined purpose.

“The diameter of the serpent was about fifteen or sixteen inches behind the head, which was without any doubt that of a snake; its color dark brown, and yellowish white about the throat. It had no fins, but something like the mane of a horse, or rather a bunch of seaweed, washed about its back. It was seen by the quartermaster, the boatswain's mate, and the man at the wheel, in addition to myself and the officers above mentioned. I am having a drawing of the serpent made from a sketch taken immediately after it was seen, which I hope to have ready for transmission to my Lords Commissioners of the Admiralty by to-morrow’s Post- PETER M’QUHAE, Captain.”

Henry Lee also noted: “Lieutenant Drummond, the officer of the watch mentioned in Captain M’Quhae’s report, published his memorandum of the impression made on his mind by the animal at the time of its appearance. It differs somewhat from the captain’s description, and is the more cautious of the two. I beg to send you the following extract from my journal. H.M.S. Daedalus, August 6, 1848, lat. 25’ S., long. 9'37'E, St. Helena 1,015 miles. In the 4 to 6 watch, at about 5 o’clock, we observed a most remarkable fish on our lee-quarter, crossing the stern in a S.W. direction. 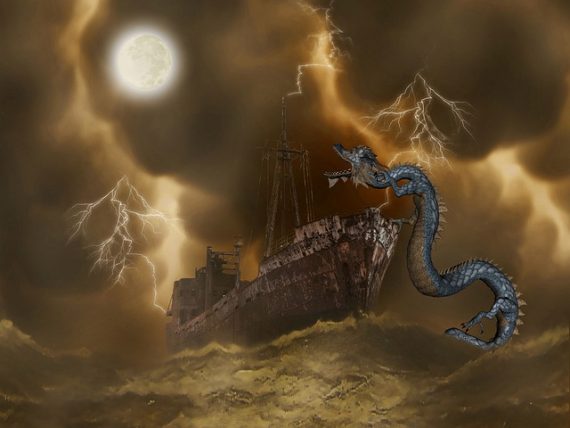 “The appearance of its head, which with the back fin was the only portion of the animal visible, was long, pointed and flattened at the top, perhaps ten feet in length, the upper jaw projecting considerably; the fin was perhaps 20 feet in the rear of the head, and visible occasionally; the captain also asserted that he saw the tail, or another fin, about the same distance behind it; the upper part of the head and shoulders appeared of a dark brown color, and beneath the under-jaw a brownish white.

“It pursued a steady undeviating course, keeping its head horizontal with the surface of the water, and in rather a raised position, disappearing occasionally beneath a wave for a very brief interval, and not apparently for purposes of respiration. It was going at the rate of perhaps from twelve to fourteen miles an hour, and when nearest was perhaps one hundred yards distant; in fact it gave one quite the idea of a large snake or eel. No one in the ship has ever seen anything similar; so it is at least extraordinary. It was visible to the naked eye for five minutes, and with a glass for perhaps fifteen more. The weather was dark and squally at the time, with some sea running. EDGAR DRUMMOND, Lieut. H.M.S. Daedalus; Southampton, Oct. 28, 1845.”

To Celebrate “National Lighthouse Day”, Here Are Some Of The Most Haunted Lighthouses