A Ghostly Apparition And A Lonely Possessed Doll

When members of the paranormal group “Spirit Walkers” conducted an investigation at the Pool Parc Asylum in Ruthin, North Wales, earlier this month, they were left shocked at what they had discovered.

During their investigation, they witnessed an unexplained figure in addition to hearing screams and a growling noise. Beth Hopper, who is the crew’s leader, told The Standard, “It sounded like torture to me, it was horrible.” That would make sense as the location was once a prisoner of war camp in addition to being an asylum.

In addition to hearing footsteps and disembodied voices, an ex-patient who believed that he was a Roman soldier is said to haunt the building by marching up and down the corridor. He is also said to throw stones at people. Another claim came from a girl who said that she felt a nurse standing in front of her.

It was after the “Spirit Walkers” group left the building that they noticed a noose hanging from a window that they hadn’t previously noticed. And when they were going through their evidence, they noticed an unexplained figure standing in the window next to the noose in one of their pictures. You can see pictures here from their investigation as well as a video that captured the growling sound. 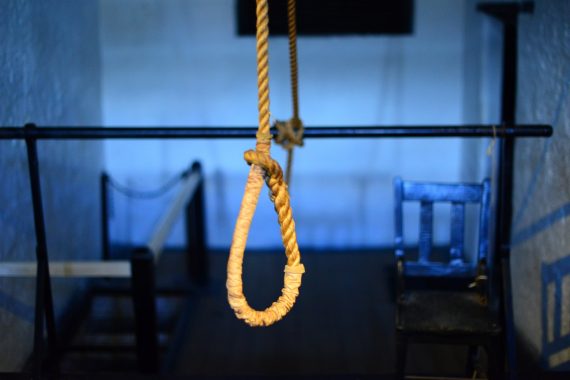 In other paranormal news, a woman in Malaysia was so creeped out by her daughter’s doll that she said it was actually possessed and that the lonely spirit had followed them when they moved from Sarawak to Kelantan. She even posted her experiences to her Facebook page which so far has over 9,000 shares. She explained how the “thing” disturbed her by kicking her bed and making it hard for Nina to sleep because she felt as if something was watching her.

Unlike other allegedly possessed dolls, this one actually looks pretty harmless. She has long blonde hair, pretty blue eyes, and is wearing a cute doll outfit. But according to Nina, the doll has caused the toilet doors to shut on their own and she has heard the pipes turning on when they were off. They have even witnessed unexplained shadows moving around her daughter’s room, as well as hearing chairs being dragged across the floor and the sound of coins and/or marbles dropping onto the floor.

Apparently the activity has gotten worse since they moved to Kelantan in July so Nina called in a professional who claimed that the spirit in fact followed them when they moved and that it was a “lonely soul looking for a master”. The doll ended up being set on fire, but Nina says she’s still traumatized and has a hard time sleeping alone. You can see pictures of the doll here.