Some places just seem destined to be cursed, haunted, or both. They have a certain history or record of hardship and strife, coupled with an eerie atmosphere that make them irresistible magnets for talk of the paranormal, and such places can be found all over the world. One interesting such location is an abandoned gold mining town in the wilds of California, which has a tragic past and has gone on to be considered one of the most intensely haunted places in the state, complete with ghosts, specters, and an evil curse.

The rather dark history of the town of Bodie, California begins back in 1849, with the discovery of gold in the Western Sierra foothills at a place called Sutter’s Mill, starting off the great Gold Rush. In no time at all people were pouring into the region with dreams of making it rich and clamoring for some of that gold, with some getting rich practically overnight and others having their dreams dashed. There was also a push to scout out other potential gold reserves in the region, and in 1859 a group of prospectors found it in the Eastern Sierra foothills. Although they at first intended to keep it a secret until after the coming winter had passed, this would not last.

One of the prospectors, a man named W.S. Bodey, would go back on his word and return the site early, along with a companion named "Black" Taylor, but their plans would be cut short when a vicious blizzard descended upon them, ultimately killing Bodey. When Spring came, word got out on the new discovery of gold and silver in the Eastern foothills, and a camp sprung up to deal with the influx of people, named in honor of the fallen Bodey but with his name misspelled “Bodie.” It was not yet a town so much as a little backwater collection of huts really, at least until a massive vein of gold was found practically right under their feet, and Bodie overnight became one of the fastest growing gold rush boom towns in the country.

What had been just a ragtag collection of tents transformed immediately, with boarding houses, hotels, restaurants, saloons, and even a ballroom and opera house sprouting up rapidly, all to cater to the hordes of people descending upon them looking to get rich. Of course, with so many people packing into the town in such short order there were some nefarious elements that took up residence here as well, with gangsters, gamblers, prostitutes, outlaws, and all manner of other criminals gathering here and causing trouble, to the point that it became quite a hive of lawlessness in the process. Drinking, fighting, murders, and shoot outs were a part of life here, as well as deadly mining accidents, but there was so much gold and silver to be had that most people didn’t care. It was worth the risk, and in its heyday its population would skyrocket to around 10,000 residents.

The town’s downfall began in 1878, when an extremely harsh winter caused much death and suffering. The following year, a massive fire hit the town, followed by several more fires including a catastrophic one in 1892 and another in 1932 that gutted a good portion of the buildings. Regardless, the town eked by on life support for decades, until the Great Depression and Prohibition pretty much sealed its fate and people began an exodus to other pastures. Many of the town’s residents were so eager to get out of there, in fact, that they left all of their belongings behind, taking only what they could carry to leave houses eerily still furnished and with even dishes on the tables as if waiting for owners that would never come. By the 1950s the town was completely abandoned to the elements, its eerie fully furnished houses becoming weed choked and feral.

The town would in 1962 become a State Historic Site, and preserved in the state it was in, a condition referred to as “arrested decay.” It became as an ancient insect in amber, a snapshot of another era, oddly intact and with its houses still complete with wallpaper and paintings on the walls. It is like an outdoor sprawling museum more than a ghost town, and perhaps it is this spooky atmosphere and the dark history of the town that has contributed to it gaining a reputation for being one of the most haunted places in California. 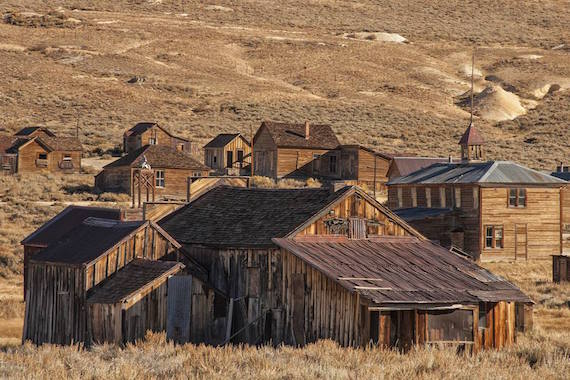 There are numerous ghosts said to lurk about the ruins of Bodie. One is that of a little girl who runs around and giggles, and who is referred to as “The Angel of Bodie,” thought to be the spirit of a girl killed accidentally by a miner’s pick and whose grave is said to have a marble angel standing guard over it. While the girl’s ghost is mostly said to be playful and friendly, a more sinister supernatural force supposedly resides in the former house of lumber magnate James Cain, who once supplied wood for the town. Cain had a couple of skeletons in his closet, such as the fact that a Chinese maid with whom he had been having an affair one day took her life on the property. She is said to still be there, and is allegedly a rather violent and vindictive spirit prone to attacking women who stay in the house and often seen angrily pacing about in one of the upper rooms. Indeed, there is so much paranormal activity going on in the Cain house that some park rangers apparently refuse to enter it. Other ghostly activity in Bodie includes the sound of music that will come out of nowhere, shadow figures in the streets, disembodied voices, laughing, or screams, and a house that is said to produce the sounds of joyous laughter and the smell of food despite being empty, among others.

Perhaps the most famous paranormal phenomenon in Bodie is that it seems that people who take something from here are cursed with bad luck, misfortune, hauntings, and even death. It doesn’t seem to matter what one takes, and such objects include bottles, rocks, nails, pieces of clothing, trinkets, various antiques from houses, and in one case apparently even whole piano that rangers say someone just loaded up into a truck and drove off with. The problems that people who have taken these objects have claimed to have had are numerous, ranging from freak accidents, to health issues and even serious diseases such as cancer, to pet deaths, financial ruin, or romantic strife. Some people have even claimed that they were plagued by poltergeist activity or haunted by ominous shadowy apparitions after taking items from here.

One famous case is two young women who took some pretty rocks from the ground and made necklaces out of them, only to immediately be besieged with bad luck, strange ashes on their skin, and even an earthquake that struck their town. In another instance a German tourist took an old bottle and upon returning home had a traffic accident and his son had a bike accident in quick succession, both times when they happened to have had the bottle with them. The list goes on and on, and the ranger's office receives hundreds of letters and packages from people sending the stolen objects back, often with letters of apology which range from short notes to sprawling pages detailing the victim’s various woes. One letter typical of these reads as follows:

I am SORRY! One year ago around the 4th of July I was visiting the Ghost Town. I had been there many times before but had always followed the regulations about collecting. This trip was different, I collected some items here and there and brought them home. I was a visitor again this year, and while I was in the museum I read the letters of others who had collected things and had “bad luck.” I started to think about the car accident, the loss of my job, my continuing illness and other bad things that have “haunted” me for the past year since my visit and violation. I am generally not superstitious but . . . Please find enclosed the collectibles I “just couldn't live without,” and ask the spirits to see my regret.

The rangers get such letters and returned objects so often that it has become routine, with one ranger saying, “Pretty much every time the ranger goes to the post office to pick up our mail there's a cursed artifact in there.” One idea for the curse is that this was all the doing of a clever park ranger, who started the rumor to deter people from taking things. Another theory was posited by the late paranormal investigator Ed Warren, who believed that it was caused by negative energy or vibration imprinted upon them from the grim history of the site or spiritual attachments tethered to them. Yet another is that this is all just an urban legend and people’s imaginations getting the better of them. Whatever it is, locals and some of the rangers alike seem to believe that the curse is very real. One local has said, “Fair warning for anyone that thinks this is just folklore -- my life has never seen such turmoil. Please take my warning and do not remove even a speck of dust,” and park ranger Mark Pupich has given his thoughts on this as well, saying:

I believe in the hex. I don't dare take anything and neither should anybody else. I've seen enough letters, talked to enough people about what can happen. People take something, then have all this bad luck. There [have] been some really sad cases.

With the town's tumultuous past and long history of death and violence it seems only natural that it should acrue tales of hauntings and curses, but is there anything to this all? Is the curse just a ploy to keep people from misbehaving or is it really indicative of paranormal forces lashing out? We will probably never know for sure, and in the meantime people keep seeing ghosts here and sending back stolen objects that have ruined their loves, further fueling the spooky legend of the Bodie ghost town. The town is open to visitors year round, but maybe it would be a good idea to not covertly pick up any souvenirs.

Joe Rogan, Elon Musk and the God of Chaos Asteroid